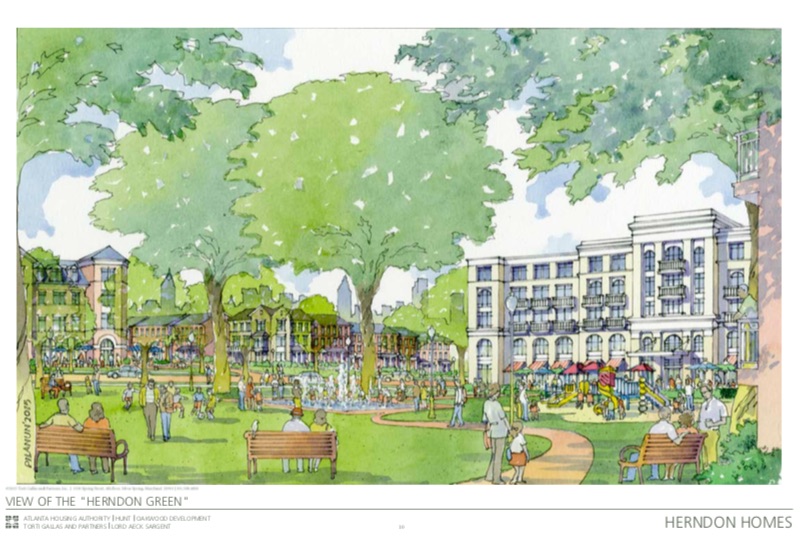 Back in 2009, Laura Lawson was the last tenant to leave the Herndon Homes public housing project along Northside Drive.

Lawson was a tenant leader at Herndon Homes for decades, and she remembers the Atlanta Housing Authority (now rebranded as Atlanta Housing) promising the tenants they could move back in when the property was redeveloped into a mixed-income, mixed-use project.

“The vast majority of the residents wanted to come back,” Lawson said in an interview. “Many residents have asked me when they can move back to Herndon. I don’t know what to tell them.” 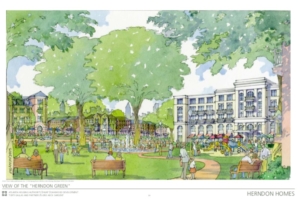 The saga of the redevelopment of Herndon Homes is multi-layered and complex. In multiple interviews with people familiar with the project – one truth is apparent. Promises were made to the community. And promises were broken.

The lack of progress on the Herndon Square redevelopment points to deeper problems within Atlanta Housing and with the master development team that was selected in 2016 to form a public-private partnership to create a new  mixed-use community.

During this past decade, the leadership at Atlanta Housing has changed multiple times – and it is on the verge of changing again. That likely is one reason why the project has stalled. Lawson also suspects politics at City Hall and AHA has played a role in the lack of progress.

Here are the facts:

On June 15, 2016, Atlanta Housing announced that its board had decided to partner with the team of Hunt Development Group and Oakwood Development group to redevelop the 12-acre site that once was Herndon Homes. Atlanta Housing had put the project out for bid in 2015, receiving eight proposals.

After the Hunt-Oakwood team was picked, it worked closely with the community on a master redevelopment plan that was presented to the community in March 2017.  170228_HRR_RFP Concept Revised Feb 2017

“We worked really hard to get them the zoning for a grocery store and a residential development,” said Joan Vernon, president of the English Avenue Neighborhood Association. At the time, the first phase of the project included a quality grocery store and affordable multifamily residences available to people who had been displaced from Herndon Homes. 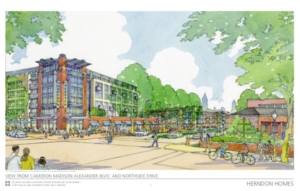 Vernon also said the Hunt-Oakwood team promised to provide health and wellness services as well as a Georgia Tech-operated “STEAM Center” (science, technology, engineering, arts and math) for community residents of all ages.

Promises also were made that community residents would be notified when jobs became available and that they would favor minority and women business owners.

But now Hunt has brought on new development/construction partners – Philadelphia-based Pennrose Properties and Capstone Building Corp. – and Oakwood is not calling the shots. The new team has changed the sequencing of the development to start with senior housing rather than the retail and multifamily residences. Other elements of the project also changed.

“We expected the developers, AHA and the contractors to maintain the commitments that were previously agreed to with the neighborhood,” Vernon said. “This would have been the most catalytic development in English Avenue. This development was completely thought through. Now it’s rearranged. It’s like unraveling a blanket and sewing it back with a new pattern.”

Cecilia Cheeks-Taylor, chief of staff of Atlanta Housing, said Hunt was in charge of the project and changes with its development partners.

“Hunt, as the master developer, has the authority to hire the construction firm,” Cheeks-Taylor said. “They don’t have to adhere to Atlanta Housing or our procurement process.”

When asked how these plans were different than what the community had agreed to, Cheeks-Taylor said: “There were some premature promises made to the community.” 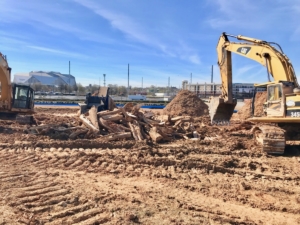 Infrastructure work has begun on the Herndon Square development, but there is a disconnect between the developers and the community on the sequencing of the project (Photo by Maria Saporta)

“I think we’ve had some challenges to get out of the ground,” Riddick-Seals said, adding that “we have had some hiccups.” But he assured Moore that there still was going to be mixed-income housing and retail, and that AH has “a very transparent process.”

Community leaders see it differently, especially when seeking public records and information from the housing authority.

“People in the neighborhood are confused,” Vernon said.

One reason the project stalled is because the city, AH and the development team could not agree on who was responsible for putting in the infrastructure. The Westside Future Fund recently loaned the developer $7.5 million to implement the infrastructure, and work on the site began in the past month.

But the Westside Future Fund, supported by Atlanta’s top corporations and foundations, is concerned by the way the community has been treated by the current development team.

“The concerns raised by the English Avenue Neighborhood Association are authentic and legitimate,” said John Ahmann, president and CEO of the Westside Future Fund. “Having personally witnessed at recent meetings the interaction between the development team and the neighborhood, I can understand the confusion and frustration. Ultimately, the development team is accountable to Atlanta Housing, and I hope the top leadership of Atlanta Housing takes steps to explain the changes and what could be done so the project meets the original commitments made to the community. As of yet, I have not seen it.”

Joe Beasley, a longtime community leader with Antioch Baptist Church – which is across the street from Herndon, has been disappointed by the new contractor’s efforts to hire people from the neighborhood.

“I’m not aware of any real outreach to the community,” Beasley said He reached out to the contractor, who told him that people in the neighborhood didn’t have the skill set. Beasley said the solution is job training.

But Beasley pointed to Atlanta Housing and the city for failing to make sure the developers lived up to the promises made to the community.

“They are sitting on some of the most valuable real estate in the city,” Beasley said. “I think a lot of that had to do with the dysfunction at City Hall and who is mayor. There’s so much confusion.” 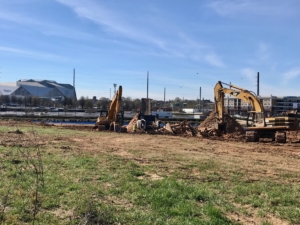 Meanwhile, both former Mayor Kasim Reed and Mayor Keisha Lance Bottoms, have said affordable housing is a priority. But during the entire Reed administration, AHA (the acronym at the time) did not develop any new housing. By the way, all but one of Atlanta Housing’s board members were appointed by Reed. That also included Riddick-Seals, who went from AH’s board to serve as its interim CEO.

Bottoms was asked about whether she planned to appoint her own people to the board. “I have not given any focus or attention to the board,” she said.

But she said the city and the authority are in the final stages of selecting a new CEO of Atlanta Housing, which she said is key in her efforts to fulfill her campaign promise of raising $1 billion for affordable housing in the city.

“I’m just making sure we have a permanent person as head,” Bottoms said.

When asked about the Herndon project, she answered: “I believe all the Herndon situation really stresses the need for us to have permanent leadership (at Atlanta Housing).”

In the meantime, Georgia Tech is no longer involved with the STEAM Center, according to Chris Burke, Georgia Tech’s director of community relations.

“We didn’t back out, rather the project never got going – and apparently still hasn’t gotten off,” Burke wrote in a text, adding that the Memo of Understanding “expired” between the parties. “We had every intention on providing these services in partnership with TechBridge. The concept was to create a “K to Grey” learning center.”

When asked what happened, Burke said: “Initially I thought the transition of leadership within AHA was to blame, and that may be part of it. But the project has seemed to linger in the balance for a really long time now, so I have no idea what the holdup is.  I not sure if it’s because they (AHA) have other priorities, but clearly something is wrong to be this far behind schedule.It’s most unfortunate.  The community was counting on this project.”

Community leaders are not giving up hope.

“I hope they will come back and regain the trust of the community,” Vernon said. “Again, our goal is to work in collaboration with Atlanta Housing and the original team of Hunt/Oakwood to make the development promised and supported by the community a success.“ 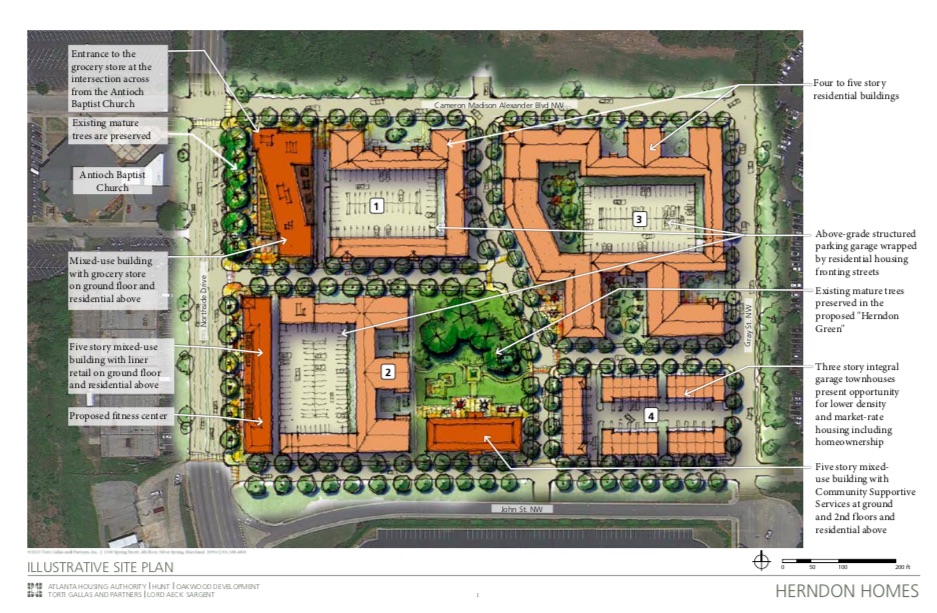