Over the last several years, the folks at sports and entertainment venue State Farm Arena — home to the Atlanta Hawks — have made a strong commitment to operating sustainably. Through this journey, the Atlanta arena has recently reached a milestone for the amount of waste diverted last year, while also celebrating a one-year anniversary with a key recycling partner.

Ahead of its official announcement, the team at State Farm Arena told SaportaReport that in 2022, the Arena diverted over 2.5 million pounds of waste from local landfills.

“The Atlanta Hawks, under the ownership of Tony Ressler and Jami Gertz, made it very clear that the Atlanta Hawks are a civic asset and a community asset,” said Andrew Saltzman, chief revenue officer for the Atlanta Hawks and State Farm Arena. “Our goal is to make Atlanta a better place to live, work and play. Sustainability is something that is really in our foundation.”

This recent figure is more than double the amount of waste saved in 2021 and “by far, the most we’ve diverted in a calendar year,” said Sofi Armenakian, head of sustainability for the Atlanta Hawks and State Farm Arena.

This is a striking improvement compared to just a few years ago. In 2019, the Arena diverted an average of 10 percent of its waste, but since May 2021, that figure has reached 90 percent.

The recent milestone is the result of numerous efforts, including intentional partnerships, efficient recycling services and reduced consumption. For example, the arena’s vendors no longer offer individual packets of condiments. Instead, the team buys the products in bulk, recycles the packaging and visitors use a shared condiments and toppings stand.

“Every little bit adds up very quickly. You might think, ‘It’s just a can,’ but all of those ‘just a can’ add up and make such a big impact when you’re responsibly recycling it,” Armenakian said. “We do our best to ensure [materials] go where they need to go and are handled in the most sustainable way possible.” 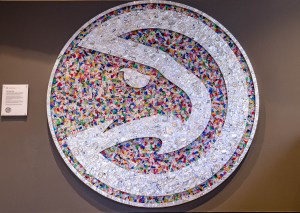 As part of this commitment to having a green operation, the Arena and Atlanta Hawks launched a partnership in November 2021 with Novelis, the world’s largest aluminum recycler. To commemorate the first anniversary of their partnership, the teams recently unveiled “FULL COURT PRESS” — a 404-pound sculpture made of collected aluminum cans and cups that were pressed into the Hawks logo.

The project was created in collaboration with local artist Taylor Means and art consultant Amy Parry and can be found at State Farm’s Terrace level by the Gate 2 entrance.

Through this partnership with Novelis, all aluminum materials at the Arena are collected, melted down and made into a new product. Aluminum is infinitely recyclable, making this a closed-loop system, which is represented by the sculpture’s circular shape.

Overall, “FULL COURT PRESS” represents the Arena and team’s commitment to a circular economy and continued efforts to maintain zero-waste status. In April 2021, State Farm became the first sports and live entertainment venue in the world to receive TRUE certification. Divided into four categories, the Arena scored the Platinum designation — the highest classification for green buildings.

“[The sculpture] is 404 pounds, true to Atlanta. I think it’s really important to continue making recycling fun, and this piece certainly represents that,” Armenakian said. “This is just part of what’s to come. We want to continue engaging with our guests to help raise awareness and do the right thing.”

Saltzman relayed a similar sentiment, adding: “That sculpture is a reminder of how important sustainability is for generations to come. This is about not just helping our own generation or even our kids but our kids’ kids and so on.”

To learn more about the sustainability efforts at State Farm Arena, click here.