The life stories of wood carvers can be as curious as their artworks. Such is the case with 114 woodcarvings now in the permanent collection of Atlanta’s High Museum of Art. 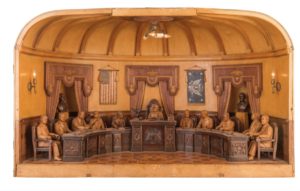 Moise Potvin (American, 1876-1948), French-Canadian/American carved tableau depicting President Franklin Roosevelt at the center with individual carvings of ten figures of his 1933 cabinet around a semicircular table having a parquet floor, wooden paneling on walls and alcoves with bust portraits depicting Lincoln and Washington, electrified sconces and a chandelier in a carved basket style blue case with glazed cover made by Moise Potvin (1876-1948), ca. 1935, carved wood and lightbulbs, High Museum of Art, Atlanta, gift from the Levine Folk Art Collection,
2020.129. Credit: High Museum of Art

Consider the story of Moise Potvin, a native of Quebec active in the early 20th century.

A maker and repairer of violins because that work paid the bills for his spouse and 12 children, Potvin also carved wood figures to sell. The High now has Potvin’s circa 1935 sculpture of President Franklin Delano Roosevelt, seated at a table with his top advisors.

The piece is big. The FDR diorama measures 40 inches by 66 inches by 33 inches. Potvin wasn’t afraid of big challenges. His diorama of The Last Supper appears to be equally impressive, and it’s said to be in the collection of the American-French Genealogical Society, in Woonsocket, RI.

The genealogical society has taken a shining to Potvin. In 2009, the society inducted Potvin into its Hall of Fame. Their version of the story of his life observes, after recounting Potvin’s experiences as a weaver and loom repairman in the once-magnificent textile mills of Rhode Island, as an editor, as the founder of an acting troupe, sign painter and violin handyman:

One biographer portrays Potvin as a whirlwind of activity as he sought to provide for the family. His outlook is captured in this quote unearthed by Nicholas H. Kondon:

Kondon tells a first-person story of his experience of helping to recover Potvin’s works from a warehouse in Niagra Falls, N.Y. Kondon told the story in 2011, in his two-part series, Moise Potvin – Artist, Entertainer, and Impresario. 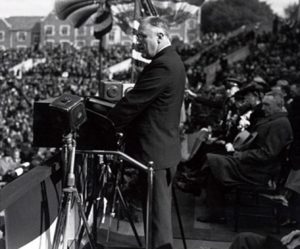 Franklin Delano Roosevelt made a reported 41 trips to Georgia and visited Atlanta on Nov. 29, 1945 to deliver remarks at the dedication ceremony for Techwood Homes, the nation’s first public housing project. Credit: georgiaencyclopedia.org: Courtesy of Georgia Info, Digital Library of Georgia

Kondon writes of touring the warehouse, in the early 1990s, with a couple who was offered the chance to view and purchase Potvin’s life works. At one point the woman lifted a piece of canvas covering a mound of Potvin’s materials:

The FDR diorama is one of 114 wood sculptures donated to the High by Connecticut-based collectors Anne and Robert Levine. The new collection solidifies the High as a repository of self-taught artists and traditional folk art forms, Katherine Jentleson, the High’s Merrie and Dan Boone curator of folk and self-taught art, said in a statement.

“More than ever before, we’ll be able to represent a greater range of artistic ingenuity in the United States across the centuries within our collection,” Jentleson said.

Potvin, whose life’s work took him from a birthplace in West Farnham, Quebec to a series of workingman trades throughout New England, now is part of this collection.