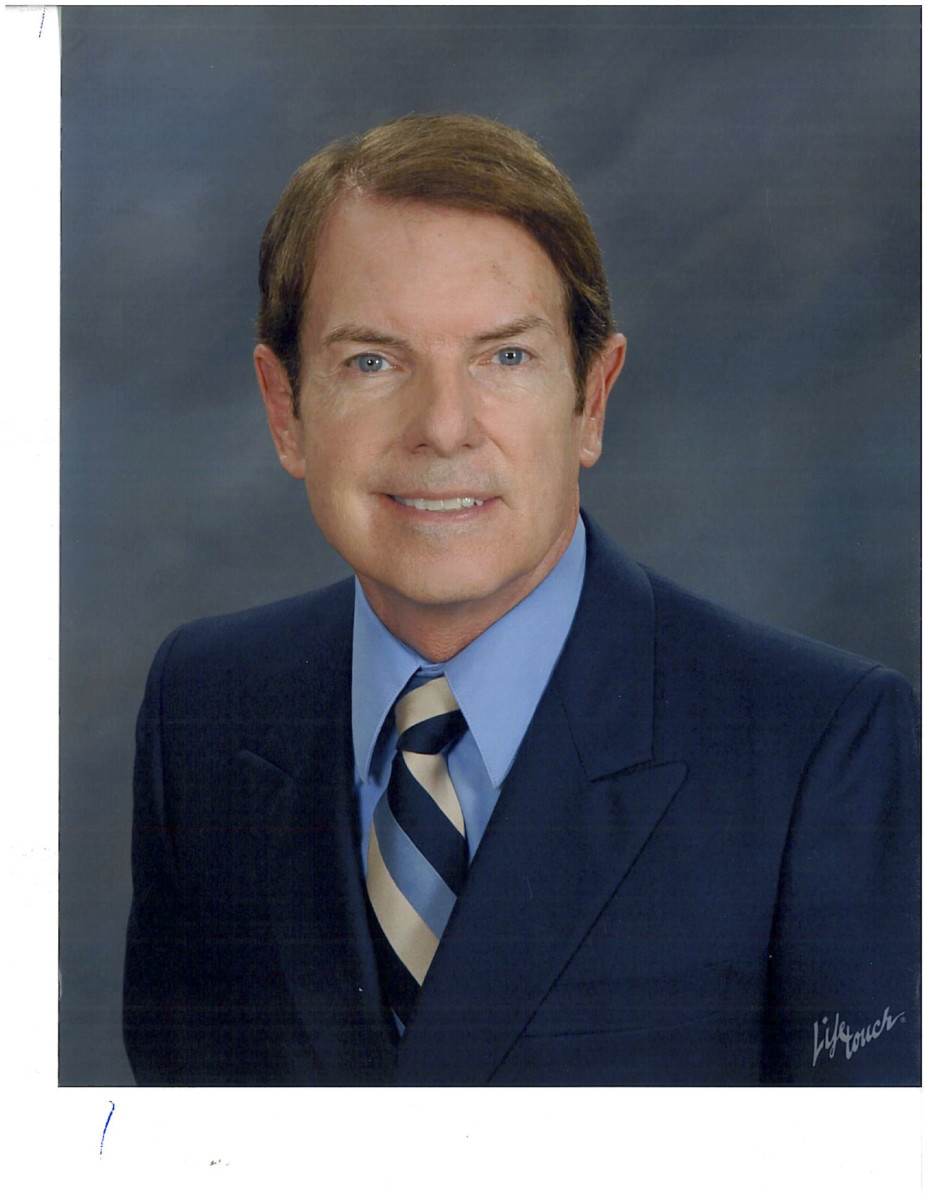 In 1972, Georgia Tech student Bob Gibeling cheered Pat Nixon’s arrival at the Republican Convention in Miami. He gave interviews to national media about his generation’s support of the GOP’s progressive policies. He dreamed of becoming mayor of Atlanta, his hometown. 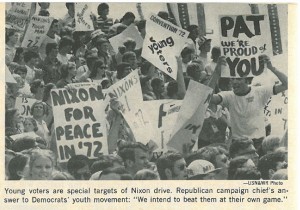 Bob Gibeling, right, greeted Pat Nixon’s arrival in Miami for the 1972 Republican Convention. He was a Young Republican at Georgia Tech, and gave interviews to national media about his generation’s support for Richard Nixon. This photo ran in U.S. News and World Report.

This week, Bob Gibeling will cheer Barack Obama at the Democratic Convention in Charlotte. As a volunteer coordinator for a faith-based nonprofit in Atlanta, Gibeling is thrilled to be voting for a platform with a full marriage equality plank. His political career has been spent not in local politics, but working for change in his religious denomination.

Over 40 years, whose life and context doesn’t change? The constants in Gibeling’s story are a family-bred passion for politics, a lifelong commitment to the middle ground and a willingness to stand for change.

On Monday, convention delegate Bob Gibeling voted with the Georgia delegation for his party’s platform. It passed by unanimous vote of the convention and 100 percent support from Georgia’s delegation. “The full marriage equality plank has now become a historic reality in the Democratic party,” said Gibeling. “This is me proudly standing with the GA delegation just after the vote. It was very moving and thrilling.”

His arrival at the opposite political pole is one marker of discovering his true religious faith and sexual orientation – a secret that kept him from realizing his political dreams. As he found himself, he realized the ground he had always stood on no longer made room for people like him.

The political is in Gibeling’s blood. His great-grandfather, Scott T. Beaton, was the Democratic mayor of the south Georgia town of Waycross, and also served in the state legislature when Richard B. Russell was speaker of the house. Beaton lived to 92, giving his great-grandson a chance to talk politics with him. “He was quite an early advocate of free textbooks for public schoolchildren,” Gibeling recalled. “He was very forward thinking for his time, and I discussed my political positions with him.”

Gibeling attended Spring Street Elementary School (now the Center for Puppetry Arts) with the children of Gov. Ernest Vandiver, who served from 1959-1963. One of those kids, Jane Vandiver Kidd, recently served as chair of the state Democratic Party.

For young Gibeling, the powerful Georgia Democrats of that era “were totally repulsive.” When segregationist Gov. Lester Maddox shook the hands of all the young Governors Honors students, “we organized a massive hand washing demonstration afterwards,” said Gibeling, who campaigned against Maddox before he was able to vote.

“The core principles of the Republican Party always resonated with me,” he said. “I’ve always been very passionate about Georgia and Atlanta moving forward, and they promoted things that needed to be done to make us more prosperous and progressive. I felt that we were held back by the policies identified with the Democratic Party.

“The first black alderman in Atlanta was a Republican. The person I most admired was Sen. Howard Baker of Tennessee, and after that, Charles Percy of Illinois – moderate Republicans who projected the image of moving forward with progressive ideas and nothing that was stuck in the past, without being super radical either way.”

In his adolescence, Gibeling’s own political aspirations faced an internal opponent: his sexual identity. He had been aware “of something different about myself at a very young age,” and when he began to feel attraction to other men, he thought, “Uh oh. To be identified as gay is the kiss of death to any thoughts of political office.”

An only child, Gibeling came out to his parents at age 15, in the mid 1960s, when homosexuality was considered a mental illness. His father Robert, an architect, and mother Naomi, a housewife, arranged psychotherapy. “It was a dark secret that we had to keep and not tell anyone,” Gibeling said. “We were all under the impression that this is something we can change, but psychotherapy did not do anything to change that.”

He sought help from his community of solid, dependable Lutherans – a Southern outpost of Garrison Keillor’s people of Lake Woebegone. As a lifelong member of the Church of the Redeemer on Peachtree Street in Midtown, Gibeling prayed for God to change him. The divine answer surprised him.

“It wasn’t a voice, but it was a revelation that came partly from a sermon at my church, and it was that God had made me this way and it wasn’t to change me,” Gibeling said. “I was made the way God wanted, and knowing that, I still didn’t know where that would lead me, especially politically.”

Still, he remained closeted as the political editor for the Georgia Tech newspaper The Technique. 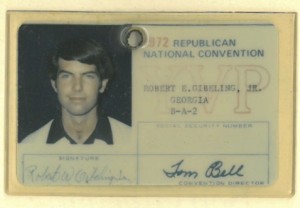 Bob Gibeling kept his ID card from the 1972 Republican Convention.

He traveled to the 1972 Republican Convention, where his photo ran in the New York Times and U.S. News and World Report (“Young voters are special targets of Nixon drive”). Walter Cronkite also interviewed him and other students.

“The news media had said some unflattering things about American youth, and we wanted to correct them,” said Gibeling, who received a certificate of appreciation signed by Richard Nixon. “We wanted to dispel the concept that all youth were voting for George McGovern.”

As the Vietnam War dragged on and Watergate unfolded, he fought disillusionment, but always returned to the GOP. He still felt welcome; its moral core still resonated.

“Nothing happened overnight,” he said of his evolution from seeing himself as straight and Republican to gay and still political. “I would take little steps each year or two, and evolve a little bit at a time.”

In the early 1980s, his career in management and advertisement he lived for a short time in Portland, where he joined a gay men’s chorus in the early 1980s. Before their first concert, members were given the option of listing their names in the program. Gibeling and others feared retribution.

“I realized that I could not have my name in the program, even though I was proud of putting my name on that performance, because I could be fired,” he said. “I realized that was a terrible injustice.” 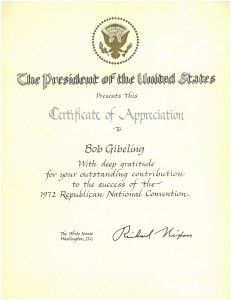 That was one wake-up moment. Another came a dozen years later at the 1992 Republican Convention. Until then, Gibeling had hung on to the GOP as the standard bearer for doing the right thing, even when that wasn’t easy.

That was it. The mild-mannered Lutheran corporate executive had had it.

“I was horrified,” Gibeling said. “It was the most judgmental, anti-gay, venomous speech. It really snapped me out of it. There was no way I could support the Republican Party any longer. I knew they had abandoned the principles that I stood for by being willing to sacrifice the short-term welfare of our country to advance their own political power.”

A place in church and state politics

In a more personal arena, Gibeling was discovering a place where he could uniquely influence the political issues that had become deeply important to him: diversity and inclusion.

“In the Lutheran church, I saw the opposite of what was happening to the Republicans: there was hope and progress, and peoples’ minds opening and a welcoming attitude spreading,” he said. “Helping individuals struggling to reconcile their own faith and sexuality was a higher calling for me than politics.”

From 1993 to 2003, Gibeling served full-time as the public voice of gay Lutherans, working to change the policies of the Evangelical Lutheran Church in America. In 2009, the denomination became fully inclusive of gay pastors and same-sex blessings. 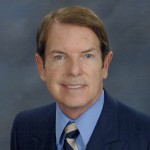 “The church has been on the more progressive side to begin with, but some of its policies were really nebulous, and many gay people had experienced the [larger Christian] church as an oppressor,” said Gibeling, who continued working in faith-based nonprofits in Atlanta and serves now as volunteer coordinator with Lutheran Services of Georgia.

As he did for the Republicans in his youth, Gibeling did for the Democrats in his middle age. In 2008, he spent his vacation weeks in Pennsylvania and North Carolina campaigning door to door for Obama. 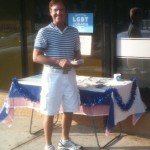 You may have even seen him in June passing out Obama brochures as part of a “GLBT voter information week” he organized at Ansley Square Shopping Center in Midtown.

This year, Gibeling also resuscitated his dormant political aspirations. His speeches at Democratic gatherings in 2012 – one at Atlanta’s IBEW headquarters in April, the other in Macon in May — helped him get elected as an at-large alternate state delegate to this week’s convention in Charlotte.

He spoke about inclusion and the language of faith. When the crowd cheered and laughed on cue, he felt a connection. He achieved what he wanted in politics since he could remember: he belonged.

“For me, it will be very moving to have participated at the national meeting where my Lutheran church voted to approve gender blessing, but also at the national convention where my political party approved full marriage equality too,” Gibeling said. “It’s amazing to come to this full circle in my life and embrace all the steps along the way. It’s been a natural progression, even though it’s not what I would have mapped or seen at the beginning.”