Study shows manatees use Intracoastal Waterway, at risk of collisions with boats 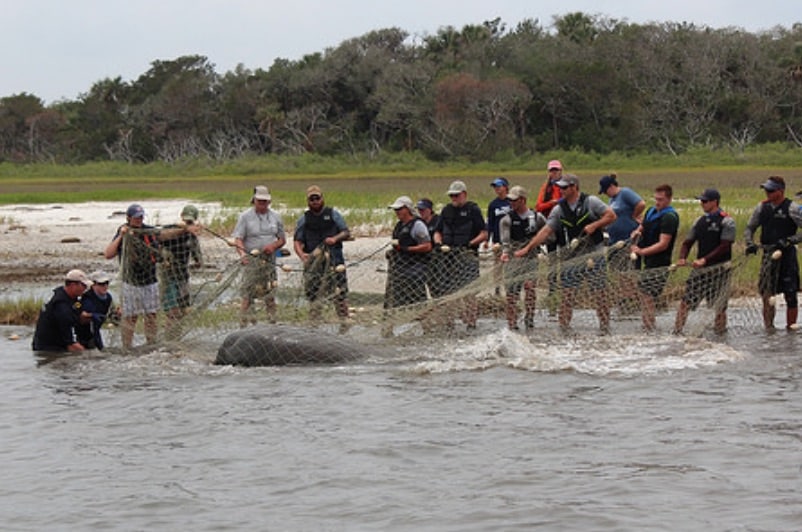 Manatees, it turns out, share something in common with recreational boaters – both use the Intracoastal Waterway to traverse the Georgia coast. This is one discovery of a manatee-tracking project that was renewed this spring. 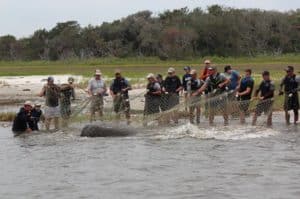 Eight manatee were captured in Cumberland Sound and tagged with a GPS transmitter that will help scientists track their location. Credit: Sea to Shore Alliance, under USFWS research permit MA37808A

“The Intracoastal Waterway is like a manatee highway,” state wildlife biologist Clay George said in a statement released by the Georgia Department of Natural Resources. “But the ICW is also a primary passageway for boats moving up and down the coast, so this behavior may place manatees at added risk of boat strikes.”

This example illustrates the reason an alliance is attaching GPS transmitters to manatees. The goal is to gain a better understanding of manatee migration in order to help the threatened species. Of all manatee deaths documented in Georgia since 2000, 27 percent were attributed to being struck by a boat.

This year’s program was conducted in Cumberland Sound from May 31 through June 2. A total of eight manatees were captured, tagged and released by a research consortium comprised of Sea to Shore Alliance, the Georgia DNR, and Georgia Aquarium.

The manatees are hunted by a DNR helicopter, whose personnel directed a custom manatee-capture boat provided by Clearwater Marine Aquarium. The boat encircled each manatee in a net. The manatees were pulled onto the boat or shoreline for tagging and physical examinations.

Vets with Georgia Aquarium and the University of Florida oversaw biologists and vets who examined the six males and two females captured. They took samples, attached the buoy-shaped transmitter and released each manatee unharmed, according to DNR’s statement. 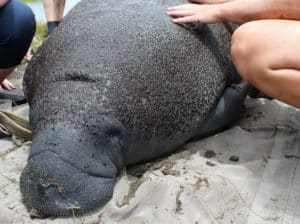 Manatees are slow moving creatures that typically weigh 1,000 or more pounds. Nicknamed ‘gentle giants’ and ‘sea cows,’ they are mostly herbivorous and some spend their summers in Georgia waters and winters in Florida. Credit: Sea to Shore Alliance, under USFWS research permit MA37808A

Transmitters are attached to a belt that fits around the smaller part of the manatee’s body, near the tail. The transmitter floats behind the manatee and scientists say it doesn’t impede movement or post a threat of entanglement.

The unit is designed to break apart easily, according to the statement. That separation happened with 11 of the 13 transmitters attached in the past two years.

Monica Ross monitors the transmissions daily. Ross is a research scientist with the non-profit Sea to Shore Alliance.

“At least every two weeks, we’ll physically locate each animal, to see what they are doing, check the equipment and take the opportunity to photo ID other animals they might be with,” Ross said. “If at any point the tag activity is abnormal, we will get eyes on the animals immediately.

“This year we are exceptionally excited to have two females to monitor, the first two captured for this study. Females use habitat differently than males, so it will be exciting to gather their movement data.”

As of this week, seven of the manatees tagged this year were within 10 miles of their capture site. The other had traveled to the Brunswick area.

Of the two manatees still transmitting their location after being tagged in 2016, one was near Richmond Hill and the other was in the Charleston area.