In a highly-anticipated Monday morning release, Truist – the entity created by the merger of SunTrust and BB&T – unveiled its logo, symbolizing the concept of a true merger of equals.

For example, the color is a deep purple, the merging BB&T’s burgundy with SunTrust’s blue.

“It’s game day for us,” said Susan Somersille Johnson, chief marketing officer for Truist, who formerly held that position with SunTrust. “It’s not what you would expect from a bank.”

About the deep purple color, Johnson described it as “a warm and inviting color.”

The monogram logo of Truist has two “T”s enclosed in a square. It represents the two “T”s in the name as well as harking back to the “T”s that were part of BB&T and SunTrust names.

The two “T”s also symbolize “touch” and “tech” to highlight the bank’s vision.

Truist relied on a panel of experts – including behavioral economists and behavioral psychologists as well as team members – throughout the process to be sure it reflected the values of the merged bank.

“It’s a merger of equals in every way,” Johnson said. “We created the monogram with arts, science and purpose to appeal to both the head and the heart.”

The timing of the rollout is occurring just before the Miami Super Bowl, and Truist plans to use the Big Game as a major branding opportunity for the new bank.

“We are the official bank of the Super Bowl Host Committee in Miami,” Johnson said. “Our official debut will be the big game in Miami.”

“The exposure was incredible,” Johnson said. “Before the merger was announced on Feb. 7, we had decided to do it again.”

The timing also worked out well to present the new Truist brand to a national and international audience.

“The Miami roll out is really good timing for us,” Johnson said.

Truist will be unveiling the new name and branding of SunTrust Park on Tuesday morning, but Johnson said it was “a safe bet” that it would incorporate the branding that was presented to the world on Monday morning. 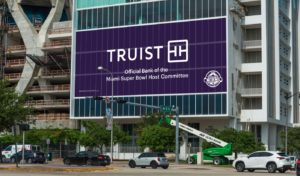 It will take between 18 to 24 months to fully integrate both institutions with a single Truist identity, but people will begin seeing the Truist brand appearing on billboards, ATM machines and branches.

A master typographer custom-made each letter forming the Truist logo. The wordmark was designed to be legible at small sizes and in digital interfaces for the name to stand out.
“You will start to see (the new logo) at our corporate offices almost immediately,” Johnson said.

Johnson said the unveiling of the new logo felt like unwrapping a birthday gift.

“I’m so excited,” Johnson said. “To me, it’s both aspirational and inspirational about what a bank can be. We want to inspire people to do more and to do better.”