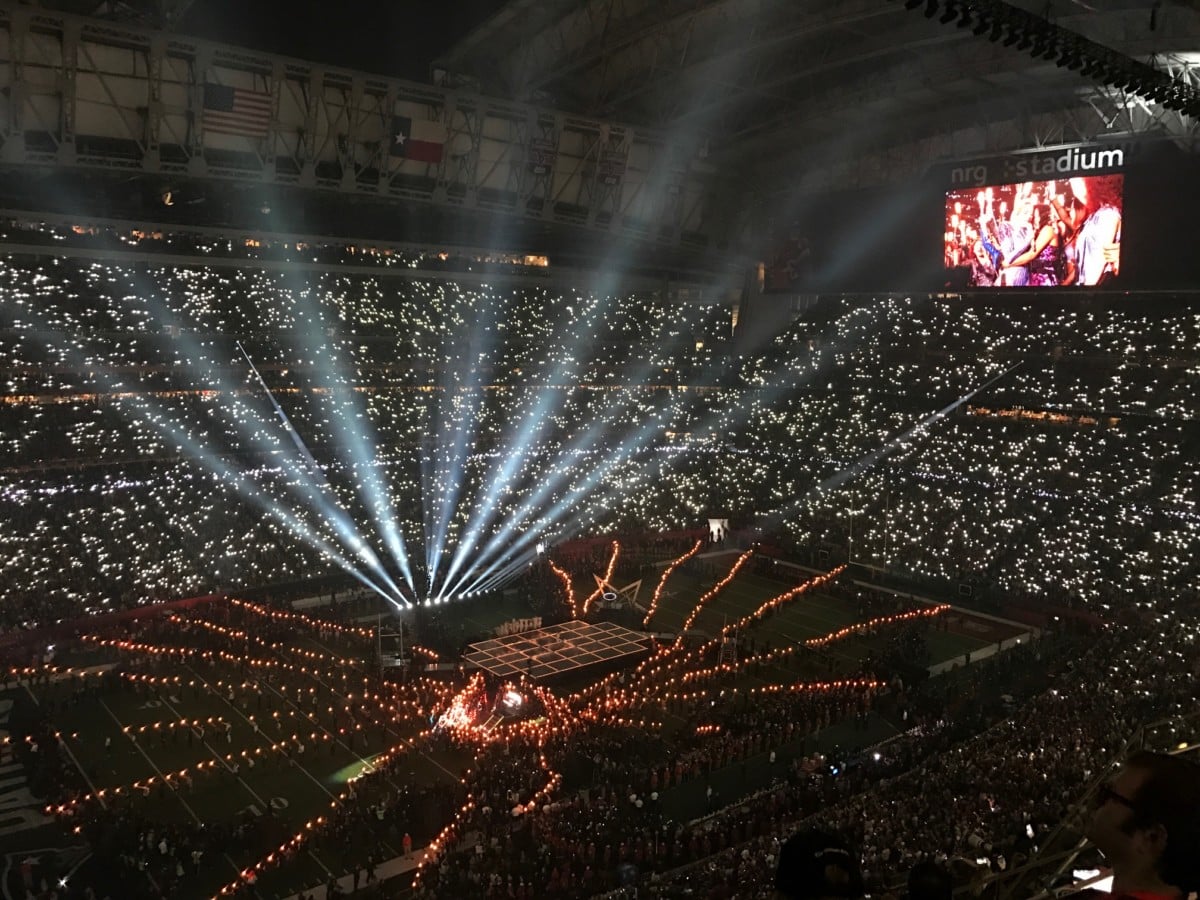 The late, great Furman Bisher once referred to the Super Bowl as “the World Series of capitalism,” and that man knew a thing or two about ball games and money. More than any other event, the Super Bowl is about high rolling, from the commercials that cost as much as a feature-length film down to the hustlers on the streets.

As it was in Bisher’s day, so it still is in the year of Super Bowl LI, Venatus Primum Super Tempus.

The Super Bowl is where Americans Red and Blue join to watch George Bush 41 toss the coin from his wheel chair, and Lady Gaga sing patriotic tunes harmonized in secondary dominants. It’s Luke Bryan meets cast members from “Hamilton.” It shoots for the broadest audience possible because it’s the most heavily sponsored.

This year, capitalism cleared its collective throat and said, “We want to sell our chicken wings on a global market and hire who we want.” This wasn’t a message from the Hollywood Left or the Madison Avenue hipsters who brainstormed the ads. It came from the board rooms which okayed the budgets for this annual festival of glitz, and it was especially notable considering the consternation Donald Trump’s tweets have caused in so many corporate PR shops.

This message was voiced in somewhat softer, more idealistic tones — very soft, in the case of Coca-Cola, which simply re-ran a 2014 ad with “America the Beautiful” sung in many languages. It was rooted, nevertheless, in bottom-line economic convictions that are at odds with the new administration’s on many levels. The current uproar over the seven-nation immigration ban may only be the beginning of a corporate reaction to Trump policies, much as the business community longs for less regulation and tax reform.

Budweiser (whose parent company, InBev, is Belgian-Brazilian owned) touched off a boycott campaign by Trump supporters on Twitter with its pro-immigration ad recounting the anti-immigrant prejudice faced by Adolphus Busch in the 19th Century. The likelihood is it anticipated something like that, and decided there were more beers to be sold on the other side of the argument.

For all that, the new president moves very easily in the circles of the capitalist elite, and is a friend of Robert Kraft, the New England Patriots owner. It was interesting that in pre-game interviews, Trump used the same phrase in predicting a Patriots victory that Kraft used in avowing his loyalty to the new president: “You stick with your friends.” Kraft told Fox interviewer Chris Wallace he hopes Trump can get back the Super Bowl ring Vladimir Putin pilfered from him.

Last week a marketing expert interviewed on television described Super Bowl week as “a lifestyle event with a football component.” Revolting as it may be, this is how many people see it.

Every so often, there’s a game so dramatic that the football component takes its rightful place at the center of the Super Bowl universe, and that was the case this year. Whatever there is to say about the politics, the ads, the public culture and all that, this game, with its counterpoise of youth and experience, of early brilliance and late, plodding determination, will be remembered longer.

Great games that you lose are awful experiences, and this one will linger in Atlanta’s civic memory a long time. But great games sometimes have sequels.

Regrettably, some of the poison which has entered our politics seeped into the aftermath of the game. Richard Spencer, the white nationalist leader who lurks around the edges of the Trump administration, tweeted his support for “the Whitest team in the NFL” and called the Patriots’ win a “victory for the White race.”

For Matt Ryan, the white Falcons quarterback who came up short, and James White, the black Patriots running back who scored the winning touchdown Sunday night, there must have been a special bite in those words.