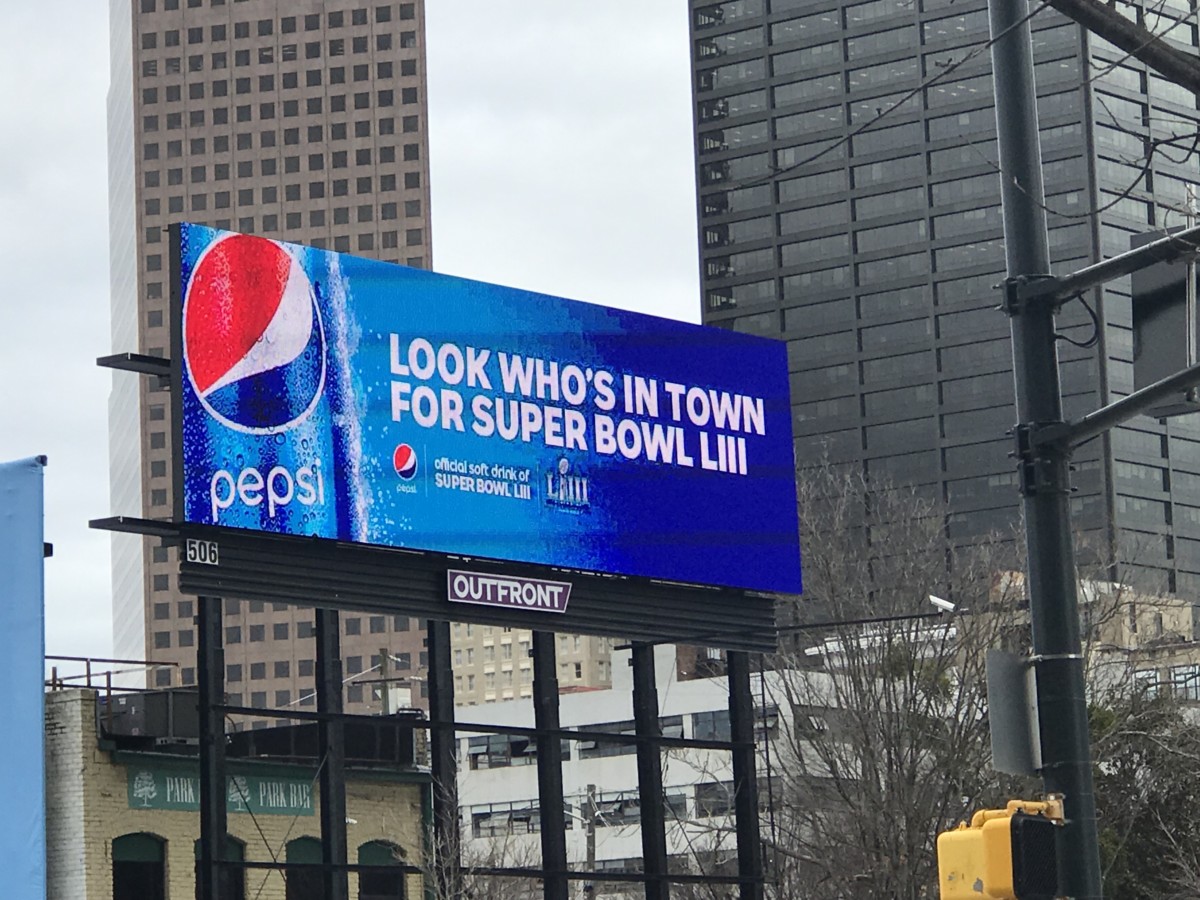 In the weeks leading to the Super Bowl, Atlanta will be painted Pepsi-Cola blue instead of Coca-Cola red.

Pepsico Inc. (Nasdaq: PEP) is an official sponsor of the National Football League, and that means the company has the exclusive branding rights to Super Bowl LIII.

So Atlanta-based The Coca-Cola Co. (NYSE: KO) will just have to enjoy the festivities as a company on the outside looking in. After all, Coca-Cola was an NFL sponsor until 2002, when Pepsi paid good money for the sponsorship. 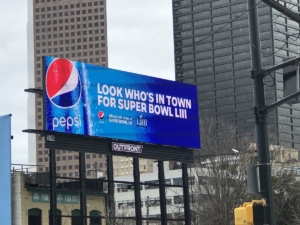 And as it turns out, several Atlanta-based companies are in the same difficult spot.

AT&T Mobility, which has been based in Atlanta although the parent company is based in Dallas, also is disconnected because Verizon is the official NFL sponsor.

Welcome to the high-stakes world of corporate sponsorships and the National Football League. 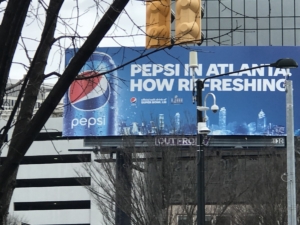 When Atlanta was submitting its bid for the 2019 Super Bowl in Charlotte, N.C., four years ago, it knew it would need to raise at least $20 million from the local business community to be able to host The Big Game. Another $16 million is being raised through the local hotel-motel tax.

“We could not have brought the Super Bowl here without the support of the corporate community,” said Doug Hertz, co-chair of the Atlanta Super Bowl bid committee. “We had to feel relatively confident we were going to raise the money when we submitted our bid. From my perspective, all these major Atlanta companies that participated at a major level deserve a lot of credit because the benefits they will receive are peanuts compared to their investment. They did it to showcase Atlanta.”

Hertz said the most difficult conversations he had during the bid process were with the handful of Atlanta companies in direct conflict with NFL sponsors.

“Why should they do that when their competitor is going to get the benefit?” Hertz asked rhetorically. “The reason is because they are boosters of Atlanta and their hometown, and that’s absolutely the only reason. These guys stepped up, and they’re getting very little benefit.”

Although they many sponsors have had limited opportunities for Super Bowl branding, the companies are entitled to tickets, special invites to events and guaranteed slots for their employees to serve as volunteers. 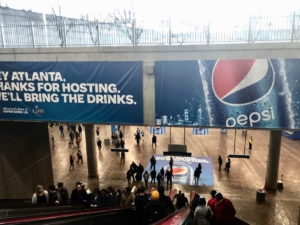 Pepsi has taken over the MARTA Station next to State Farm Arena, GWCC, CNN Center and near Mercedes-Benz Stadium (Photo by Maria Saporta)

Delta Air Lines Inc. (NYSE: DAL), however, is one local company that can take full advantage of its Host Committee partnership. Because the NFL does not have an airline sponsor, Delta has been able to leverage its Super Bowl marketing and branding ties.

Meanwhile, Pepsi is relishing its role as the NFL sponsor during the Atlanta Super Bowl. It has been renting out billboards in town painted in Pepsi blue saying: “Pepsi in Atlanta. How refreshing,” or “Hey Atlanta. Thanks for hosting. We’ll bring the drinks,” or “Look who’s in town for Super Bowl LIII.”

Todd Kaplan, Pepsi’s vice president of marketing, said in a statement to stay tuned for even more.

“Super Bowl is one of our favorite times of the year and Pepsi will be in full force in Atlanta – in stores, on billboards, on recycling bins and at and around the stadium,” Kaplan said. “We are working in close partnership with our great local customers, and while we aren’t ready to talk about all our consumer activations in Atlanta quite yet, we do have some fun moments planned on the ground.”

Pepsico also owns Gatorade, which will be on the field hydrating athletes. It also owns Frito-Lay, which will have the Tostitos Cantina activation at Super Bowl Live where fans can meet NFL greats and can participate in tailgating games and food challenges.

There are several special quirks when it comes to the Coke versus Pepsi story. The NFL will have a perimeter downtown where only NFL sponsors can be on display. It just so happens that the World of Coke is located within that perimeter, but it will be able to continue to operate during the Super Bowl festivities.

Another quirk is that Coca-Cola is a sponsor of the Atlanta Falcons, and it has the pouring rights inside Mercedes-Benz Stadium. During the game, the self-serve fountain drinks will continue to sell Coca-Cola products. Pepsi products will be available at limited locations, such as eight branded kiosks within the stadium. Pepsi products will also be available in all NFL League suites as well as all Pepsi-sponsored local NFL team suites. The remainder of the suites will feature Coca-Cola products.

The cups that will be sold also will have generic Super Bowl branding without the Pepsi logo, according to Mike Egan, senior vice president and general counsel of the AMB Group, which owns the Falcons. 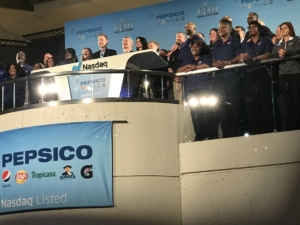 Meanwhile, the Coca-Cola Co. soon might be sharing a few of its own strategic tricks. “As Atlanta’s hometown beverage company for more than 130 years, we’re thrilled to help our city welcome everyone to town for the Big Game, including our friends from Pepsi,” said Kent Landers, a Coca-Cola spokesman. “We will share more details on our plans ahead of the game.”

“When we decided to be involved in bringing the Super Bowl to Atlanta, we did it because it was a civic responsibility,” said Abney, who described the situation as unusual. “We knew about the NFL’s relationship with one of our competitors. Our efforts have been focused more on our location in Atlanta rather than marketing or branding.”

When Atlanta previously hosted the Super Bowl in 1994 and 2000, the costs were much cheaper. During those years, individual companies did not need to commit as much as they have for this Super Bowl.

“The Super Bowl has gotten so big and so costly around security, transportation and environment that we needed to raise the money so we could host it the way Atlanta would want to – showcasing the city not only around the United States but around the world,” Hertz said.

Dan Corso, president of the Atlanta Sports Council and chair of the Host Committee, said it had received a large share of the local commitments at the time of the bid.

“To their credit, they came and contributed to the cause even though they knew they would not get the normal branding rights,” Corso said. “It’s a credit to the corporate community in Atlanta. They make things happen.”

Brett Daniels, chief operating officer of the Host Committee, said it was an amazing show of faith on the part of corporate sponsor.

“Many of these companies signed up sight unseen,” Daniels said. “They didn’t have a specific package proposal when they signed up.”

To get executives to say yes, Hertz explained to them the notion of what’s expected of Atlanta companies.

“I couldn’t make the case that it was a good investment, that they would be getting the benefits to make it worthwhile. My pitch to them was: ‘This is really your civic rent.’”

It harked back to a long-time Atlanta civic tradition. Local executives believed that when the Atlanta community did well, their companies would do well. Contributing to an Atlanta Super Bowl would be an investment for the greater good.

“It’s a one-time deal, and it’s very important to continue to keep Atlanta in the global eye,” Hertz said. “For two weeks, every major news outlet from around the world will be broadcasting from here.”