In fiction, superheroes often elude the camera, their legends created by what bystanders thought they saw.

Inside an Atlanta photography studio, Batman, Wonder Woman, Nightwing, Superman, the Green Lantern and other beloved superheroes are captured in light and shadow and framed as stylized fashion portraits. 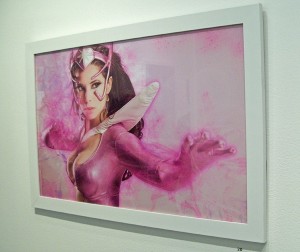 Margie Vizcarra Cox as Star Sapphire, a character from the Green Lantern universe.

These are real people from Atlanta, but not movie stars or models. Many wear costumes that they painstakingly created down to the smallest authentic detail. They never lost that childlike love of dress-up play and now steer that passion to entertain hospitalized children. They are also the subjects of a photographer using his eye to elevate their zeal into an art form.

Photographer Andrew Michael Phillips’ Cosplay Gallery display opened January 17 at the Showcase School of Photography (1135 Sheridan Road, Atlanta, Georgia 30324). The photographs are windows into the world of fantasy, and show the power of refining the lens we use to look at the world.

Cosplay—if you’ve never faced a traffic jam spawned by Imperial storm troopers, zombies and other creatures at Atlanta’s DragonCon festival—is short for costume play. It’s a kind of performance art in which participants dress up in elaborate, meticulously crafted costumes to portray characters or concepts from graphic novels from horror, fantasy or science fiction movies.

Several of the cosplayers showed up in costume for show’s opening. 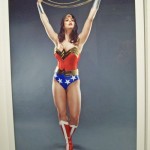 Among them was Margie Vizcarra Cox, who came dressed up as Wonder Woman, not the iconic Amazonian version of the D.C. Comics series and popularized on TV by actress Lynda Carter, but the “Injustice” version Wonder Woman, from a video game.

Instead of a starry bodice, Cox’s costume featured an eagle emblem across the top, coupled with a cream-colored cape, tied around the shoulders by rope. Cox even wore blue contact lenses to match the color of the character’s eyes. 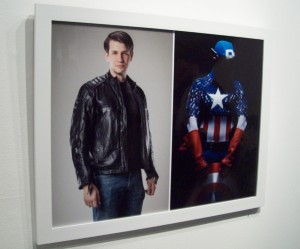 Cox’s husband, Michael, was dressed up as Cyclops, the X-Men character, who has laser beam eyes. By day, these superheroes are, respectively, a personal trainer and a shift manager for a children’s clothing company.

Cox said her love of  cosplay might go as far as back when she “jumped off the couch probably far too many times pretending to be Batman,” she said.

Cox’s interest intensified through her husband, who was a fan of graphic novels and used to dress up as Batman for children’s events in Tampa, where they are both from. That interest led them to Heroes Alliance.

Cosplay for a cause

Heroes Alliance is a non-profit group that sends performers dressed as superheroes to area hospitals such as Children’s Healthcare of Atlanta to entertain seriously ill children. The service they provide is much like that of the Big Apple Clown Care Unit. 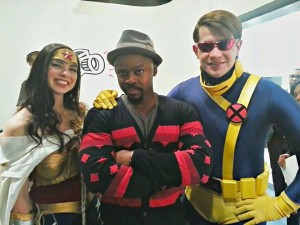 The Coxes met Phillips when he was photographing DragonCon. They introduced him to Heroes Alliance, “and me being me I brought my camera so I could document it,” said Phillips at the show’s Friday night opening.

As the postmodern equivalent to Jimmy Olsen, the cub photographer who worked alongside Clark Kent (aka Superman), Phillips said he kept following the Coxes as they volunteered and documenting them with his camera.

The access combined with his trained eye helped him see more than the typical camp captured during DragonCon. Phillips is a graduate of the Savannah College of Art and Design and specializes in fashion and portraiture photography. He studied the ornate craftsmanship of their costumes and makeup and knew it had not been captured by amateur photographers in dull, poorly lit convention venues.

“I wanted to take it to another level,” said Phillips, who goes by Dru. “You have put so much effort into your costume. Now it’s time to capture that same intensity in a beautiful and respectful way.”

He brought cosplayers, including Yaya Han, a professional cosplay model and costume judge whose work has been featured on television, into the studio, depicting them against plain backgrounds with neutral colors that highlight the costumes. Lighting brings out greater detail. 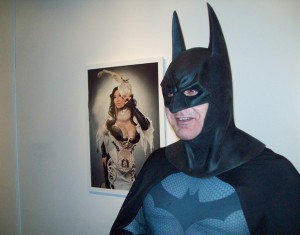 “Having it professionally done really bring out the costume; what it’s supposed to look like,” said Max Thornton, who came with his dad to see the exhibit.

Margie Cox said the experience of seeing her photographed professionally as Wonder Woman, “really feels good as an artist. It feels really good to see it in a gallery setting.”

Phillips said he considers his show an opportunity to give back to the cosplayers he’s photographed for Heroes Alliance, to give them something in return for the smiles they have put on the faces of hospitalized children. With his camera, he performs for the performers: “I get to show my appreciation to them by doing a show like this.”

Phillips said the show will remain open for at least a month. He hopes to follow his exhibit with a second, much larger one that will feature the work of other photographers.

Johanna Smith helped with the reporting of this story. Ben Smith can be reached at [email protected]

Previous Article
State of the State is between a rock and a hard place
Next Article
King’s final frontier: Georgia losing war on poverty, GBPI study calls for new policies to mitigate poverty