The Butler Street Community Development Corporation (CDC), a nonprofit developer, aims to rebuild most of the block on Auburn Avenue between Bell Street and Jesse Hill Jr. Drive into a massive, mixed-use structure. That also means demolishing the approximately 114-year-old building at 229 Auburn known as the Atlanta Life Insurance Company Branch Office, an artifact of Sweet Auburn’s past as one of America’s wealthiest Black business districts in the Jim Crow era. 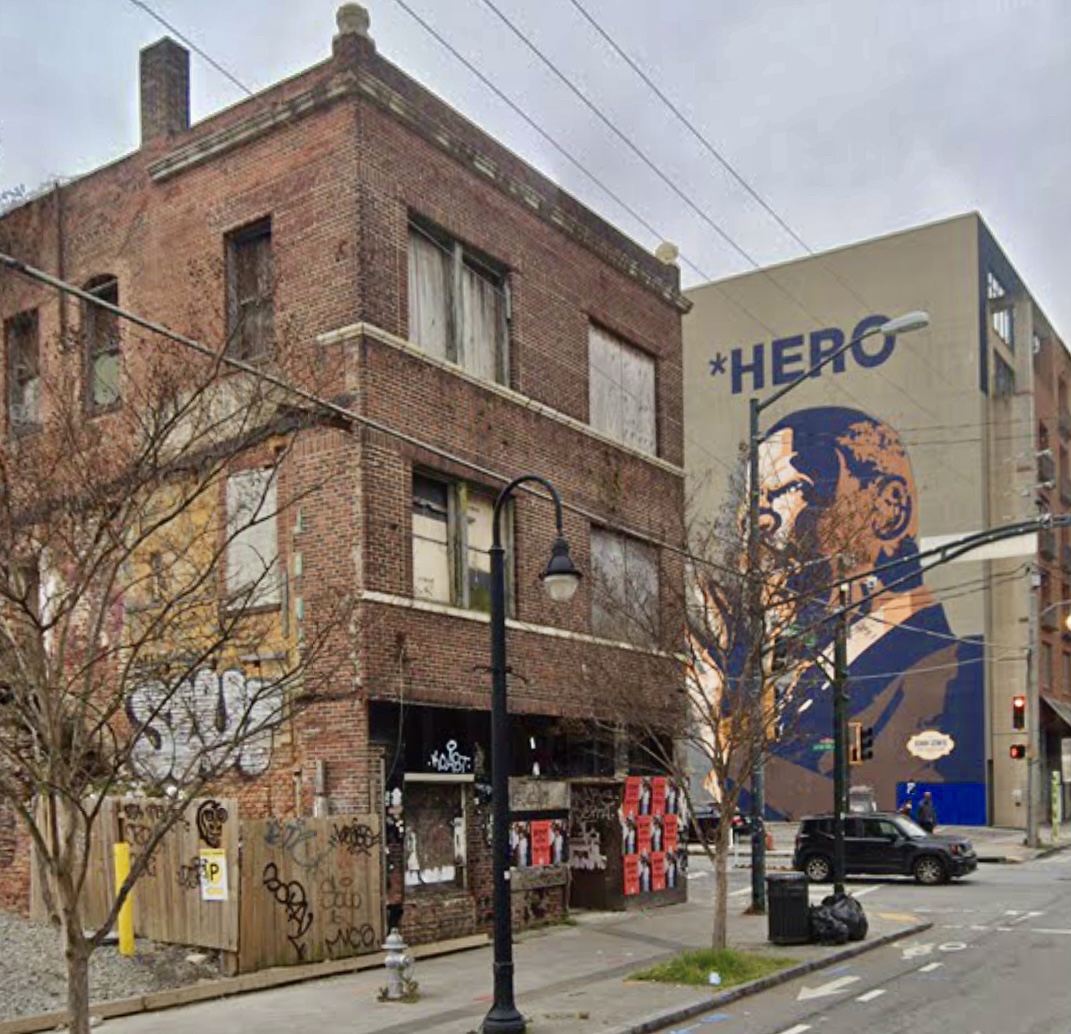 The 229 Auburn Ave. building, with the John Lewis mural in the background, as it appeared in 2017. (File photo by Kelly Jordan)

Preservationists are opposing the demolition of a building that is within City and national historic landmark districts. Last week, the City’s In Rem Review Board ordered the building’s demolition on safety grounds after Code Enforcement complaints. But the CDC still needs approval from the Atlanta Urban Design Commission (AUDC).

Alfonza Marshall, the CDC’s board chair, says his team intends to save and reuse the bricks from the building and preserve a historic advertisement painted on one exterior wall. Preserving the entire building, he said, is too expensive and the CDC is focused on the transformative possibility of the overall plan, which is still on the drawing board.

“We think this project will be catalytic for Sweet Auburn and the whole district,” said Marshall. As for preservation concerns, Marshall added, there are more ideas than funds. “I could just keep it simple. Just show us how to make it happen with the money,” he said.

To preservationists, such a loss would be yet another chipping away at Sweet Auburn’s storied past in a district that has repeatedly appeared on lists of the historically endangered. The National Park Service (NPS) in 2019 commissioned a study of the district that found 47 percent of its historic buildings have already been demolished and identified the long-vacant 229 Auburn as perhaps the most endangered.

“The loss of the Atlanta Life Insurance Branch Office could further diminish the district’s historic integrity,” said the NPS in a written statement to SaportaReport.

“We’re talking about something beyond distinctive and significant for Auburn Avenue and the City of Atlanta,” said David Yoakley Mitchell, executive director of the nonprofit Atlanta Preservation Center (APC). “…You’re getting into a very dangerous space with removing any further historic fabric from Auburn Avenue.”

Joining the opposition is the Atlanta-based Georgia Trust for Historic Preservation, which in 2012 put Sweet Auburn on its annual “Places in Peril” list for the rate of building losses.

“Every effort should be made to preserve this important 1908 structure so that it can be an inspiration to current and future generations,” said Mark C. McDonald, the Georgia Trust’s president and CEO. “The Georgia Trust for Historic Preservation stands ready to render its assistance to the Butler Street CDC, the Atlanta Preservation Center, and others to give this structure new life.”

The bigger picture of Sweet Auburn’s past is on the mind of the CDC as it contemplates a future for other long-vacant and historic properties it owns. That includes the 1920 Butler Street YMCA — which birthed the CDC itself — and the 1948 Walden Building, named for an attorney and Civil Rights leader. Marshall said the CDC is considering some interrelated reuse for both of those Jesse Hill Jr. Drive buildings, with the Y as some kind of community center and a “highest and best use” for the Walden Building. Those structures are right across the street from the block aimed for the mixed-use remake.

“We do have some plans, I guess, that we’re tweaking that we want to share with the community eventually so they can see the hopes and desires for how this will all merge eventually to be a nice place to come live, work and play,” Marshall said.

The Auburn corridor — dubbed “Sweet Auburn” by legendary community leader John Wesley Dobbs — became an African American business district in the new segregation era that began in the 1890s and was especially cemented by the 1906 Atlanta Race Riot. Among the storied business geniuses drawn to the area was Alonzo Herndon, who was born into slavery but earned great wealth with a barbershop and poured his money into founding other institutions to help other Black entrepreneurs — including the Atlanta Life Insurance Company. The company’s former main headquarters at 100 Auburn is another long-vacant and endangered historic structure. The area became known for such powerful institutions in landmark buildings. 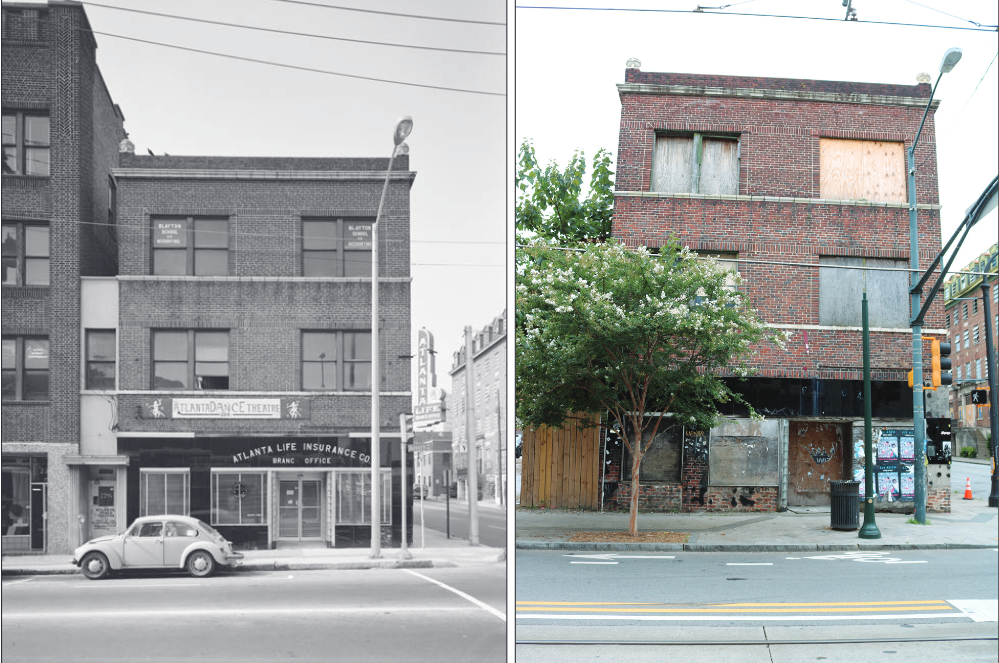 A decline began in the 1960s with desegregation and the construction of the Downtown Connector, which plowed through Black communities and cut Auburn in two. Historic structures went vacant or faced the wrecking ball, often for nothing more than a parking lot.

The 229 Auburn building, a two-story brick structure, began its long life as home to three other insurance companies. Atlanta Life later became the longest-running tenant, calling the building home for 30 years starting in 1935, according to NPS. In between, it housed many other businesses: a bank, an undertaker, tailors, the John Butler restaurant, a news dealer, a beauty college, Atlanta Dance Theatre, and an accounting school.

In 1924, 229 Auburn got a new neighbor in the form of the much larger Herndon Building at 239 Auburn, another commercial hub from the mind of Alonzo Herndon. The two, interconnected buildings later fell vacant. In 2008, they also suffered damage from a major tornado that tore through downtown Atlanta. The Herndon Building was demolished for safety concerns and now is a parking lot. The 229 Auburn building remained standing, with the removal of its neighbor revealing a rare and historic — though racially stereotyped — painted advertising sign for Gold Dust Twins Soap, depicting the brand’s two Black children.

Sweet Auburn drew interest from the budding preservation movement with the 1976 establishment of the National Landmark District. (That was followed by coverage in the City’s Martin Luther King Jr. Landmark District in 1989.) It covers an oddly shaped area of the corridor only west of the Connector and lacked the full detail of a modern application, leading the NPS to conduct the 2019 study that identified 229 Auburn as both significant and imminently endangered. The study described the building as in “poor condition” but with a “relatively intact exterior.”

The CDC has owned both 229 and 239 Auburn since 2013, according to Fulton County property records. Marshall, who has served on the board for over a decade, says the CDC has attempted to keep 229 Auburn at least safe and secure for years, “at a cost that sometimes became astronomical. …I think the people prior to me were trying to hold out and hope for the best. But, you know, neglect and time just seem to win out over time.” In December 2020, according to City records, Code Enforcement inspectors marked the property for “unsafe or unsanitary conditions,” leading to the recent demolition order.

Marshall has talked with such preservationists as Mitchell at the APC about such ideas as saving the building’s facade as part of a redevelopment. Mitchell says he believes that is still possible, especially with the technical and cultural know-how available at Georgia Tech, Georgia State and Atlanta’s HBCUs. “We have all these places that should be willing to roll up our sleeves and preserve our identity,” he says.

Marshall says he isn’t seeing numbers that work as the CDC draws up its redevelopment plan in conjunction with another developer, Gorman and Company, and the consulting firm Red Rock Global. Gorman, a national company specializing in affordable housing, just opened a Southeast office in Sweet Auburn and broke ground on a deeply affordable project in Westview. Gorman, which deferred comment to the CDC, is also an award-winning specialist in preserving “white elephant” historic structures, according to its website, though that is not part of the plan here.

That plan is still preliminary, Marshall said, with a concept of mixed residential and retail. The residential concept is approximately 99 apartment units, with about 80 percent of those units priced as affordable to households making 30, 40 or 60 percent of the area median income. 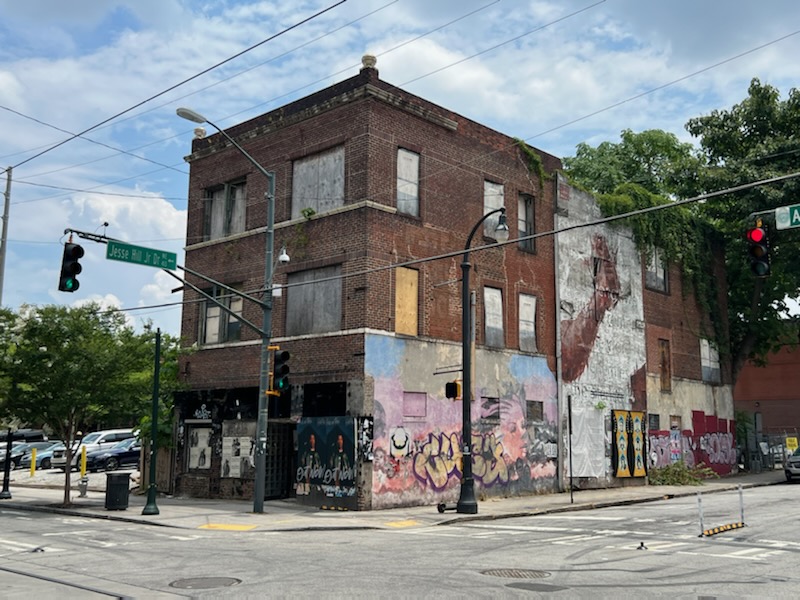 The 229 Auburn Ave. building as it appears today. (Photo by Maria Saporta.)

Besides the 229 and 239 Auburn sites, the plan also involves demolishing the J.D. Winston YMCA building at 17 Jesse Hill Jr. Drive, which dates to 1995 and has been vacant for a decade. The only untouched part of the entire block would be a Georgia State sculpture studio on the southern end fronting on Edgewood Avenue across from Sweet Auburn Curb Market.

The 229 Auburn building sits on the southeast corner of Jesse Hill Jr. Drive. In a neighborhood crammed with history, the other three corners also feature symbols of Sweet Auburn’s past and present: the 100-year-old Odd Fellows building that was a major preservation success of the 1970s; the Big Bethel AME Church; and an icon of modern Atlanta, the decade-old “Hero” mural of Civil Rights leader John Lewis.

It’s a crossroads that Sweet Auburn has visited before — figuratively and literally. That towering mural of Lewis runs up the side of an apartment and retail building that also came from a homegrown institution with a transformational intent and sparking historic preservation debates. Big Bethel joined a private developer on that project, known originally as Renaissance Walk, which started out as condos before ending up as apartments. It takes up much of its block, which meant demolishing some historic buildings, but preserved others incorporated into the design.

Now Sweet Auburn once again sees the need for change rubbing against the significance of a past that still informs present struggles.

“In the big scheme [of things], it might not get torn down,” Marshall says of 229 Auburn and his unfamiliarity with the AUDC process. But, he adds in a nod to Sweet Auburn’s present needs, “Historic preservation can’t mean, ‘Keep everything as it is.’”

To preservationists like Mitchell, there’s a way for change to happen without setting off the “ticking time bomb” of losing historic sites to redevelopment. He pointed to that new icon across the street as invisibly tied to 229 Auburn.

“That John Lewis mural has become a thing everybody wants their picture taken next to…” Mitchell says, “when there is no John Lewis without Auburn Avenue and Alonzo Herndon…”