Timing, as they say, is everything.

The exquisite actor John Hurt – it was from his stomach the creature so memorably popped in “Alien;” he also helped Harry Potter pick out his wand – died on January 27, 2017.  Just hours later, before the appreciations could hit the Internet, Mary Tyler Moore passed away. Hurt was totally eclipsed.

Ditto Farrah Fawcett who had the misfortune to die on the same day as Michael Jackson. 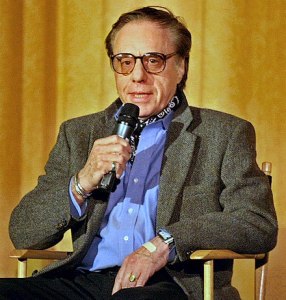 Filmmaker, critic and historian Peter Bogdanovich, who, for a brief time in the 1970s, was about as famous as anyone in America, had similar hard luck. He died on Jan. 6 and, as if the one-year anniversary of the insurrection at the Capitol didn’t offer enough competition, cinema giant Sidney Poitier died the same day. Interestingly – oddly? – Bogdanovich had directed Poitier in a throwaway made-for-TV movie,  “To Sir with Love II,” a sequel to the star’s 1967 smash hit.

Bogdanovich was the embodiment of the Icarus Syndrome. In the early ‘70s, in a period of 18 months, he made three of the most popular and critically acclaimed movies in America: “The Last Picture Show,” “What’s Up, Doc?” and “Paper Moon.”

The first, based on a Larry McMurtry novel and set in a dusty, slowly atrophying Texas town in 1951, earned Best Supporting Oscars for Ben Johnson and Cloris Leachman and was nominated for six others, including Best Picture and Best Director.

“What’s Up, Doc?” paired Barbra Streisand and Ryan O’Neal in a loose remake of the classic screwball farce, “Bringing Up Baby,” with Streisand and O’Neal in roles made famous by Katharine Hepburn and Cary Grant. The film wasn’t covered in awards like its predecessor, but it was enormously entertaining and accomplished the minor miracle of making Streisand genuinely appealing as opposed to insistently kooky (although her character is, throughout, insistently kooky). 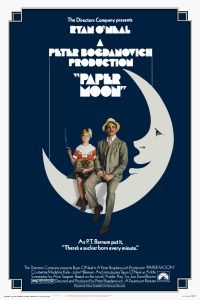 A movie poster of “Paper Moon,” one of the best movies made by Peter Bogdanovich

“Paper Moon,” another period piece, shot, like “The Last Picture Show,” in black and white, took us to the Depression ‘30s and paired O’Neal with his real-life daughter Tatum, as a father-daughter con-man team. The younger O’Neal won a Best Supporting Oscar, becoming, at age 10, the youngest performer to ever win an acting Oscar.

And Bogdanovich, who revered such Golden Age giants as Orson Welles and John Ford, seemingly joined their ranks. In classic Hollywood fashion, he dropped his first wife, Polly Platt, for his “Last Picture Show” star, the much younger, much blonder Cybill Shepherd.  Ironically, Platt, herself a formidable film force, had pointed out Shepherd’s magazine cover photo to her husband while he was casting.

How self-infatuated were the former model and her Pygmalion? They sat outside the New York Times building in a limo, with a bucket of iced champagne, waiting for the rave review they expected for their first collaboration (They were right).

However, as Quentin Tarantino, who let much-humbled Bogdanovich stay in his guest house in the late 1990s, liked to say, “There is this aspect of ‘Peter Bogdanovich died for our sins.’ Peter was so famous that his fall was equally notorious. Even as a little kid I knew he had three flops in a row.”

They came, fast and furious, in the mid ‘70s: “Daisy Miller,” “At Long Last Love,” and “Nickelodeon.” The first two starred Shepherd; Columbia Pictures, the releasing studio, barred her from being in the third. 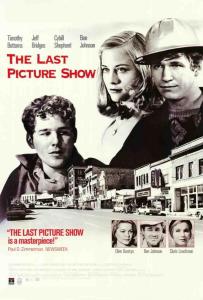 The two broke up – and Hollywood, ever ready to devour its own, cheered. As McMurtry later pointed out, “Peter was fine at first. He was a normal little married journalist who happened to have seen a million movies. Then he and Cybil became the King and Queen of Hollywood and everyone was very, very happy to see them sink.”

She became a TV star, for a bit, and he kept making movies: “Mask,” with Cher, “Saint Jack,” with Ben Gazzara, “They All Laughed” with Gazzara and Audrey Hepburn (his personal favorite, he told me), “The Thing Called Love” with River Phoenix and Sandra Bullock, and “The Cat’s Meow” with Kirsten Dunst and Cary Elwes. He also did some acting, most notably as Dr. Melfi’s psychotherapist in “The Sopranos.”

And he held on to his critic/historian side with memorable books like “Who the Devil Made It” and “Who the Hell’s in It.”

All his life Bogdanovich worried that his career would mirror that of his revered good friend, Welles. That he would make his best films first. Sadly, it turned out to be true. Yet even in his fall, there was something of worth, something redeemable. Something that spoke to artistry and vulnerability.  Jerry Lewis, another old friend, once put it this way: “Like many seemingly imperious men, Peter is easily and deeply wounded. He takes a sunset personally and cries when his laundry comes back.”

So, the perceived arrogance, which Bogdanovich himself often referred to, was, perhaps, only a paper moon. Maybe he should’ve made more movies about sunsets and laundry.  Or maybe we all should’ve given him a break.