Teen, green crusaders testify in support of Atlanta’s plan to reduce use of plastics 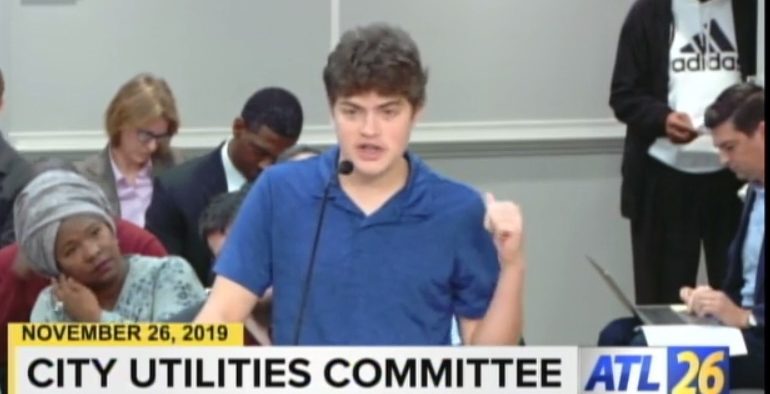 Environmental advocate Carter Ries urged members of the Atlanta City Council to support limits on single use plastics and not to allow, 'big corporations put us to the side, and put us in their cookie-cutter profit worlds.' Credit: Atlanta
Share1
Tweet
Share
Pin
Pocket
WhatsApp
Buffer8
Email
Reddit
9 Shares

Metro Atlanta’s homegrown versions of teen climate activist Greta Thunberg appeared Tuesday at Atlanta City Hall to speak in favor of legislation aimed at curbing single use plastic bags, straws and other such items at Atlanta’s airport and other city-owned facilities. 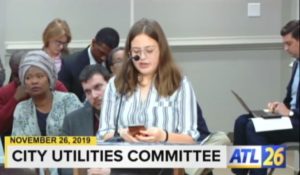 Carter and Olivia Ries are a brother and sister team from Fayetteville. They were in elementary school when they founded One More Generation, a nonprofit organization incorporated in 2010 that since has been joined by their One Less Straw pledge campaign. Their efforts parallel those of Greta, the Swedish teen climate change advocate who addressed the United Nations and was nominated for the Nobel Peace Prize.

The legislation the Ries siblings supported is slated for likely approval at the city council’s Dec. 2 meeting. It outlines broad strokes for a single-use plastics products program to be established in Atlanta’s airport, City Hall, and all city-owned facilities. The measure is a compromise that’s been negotiated for several months and calls on the city’s chief resilience officer to devise the details of a plan that’s to take effect Dec. 31, 2020.

Before the vote, each of the Ries siblings spoke briefly in favor of the proposal, reading prepared remarks from the podium. Their comments provided a counterpoint to the pros and cons of the legislation as expressed by adults in the room who are professional advocates for each side of the single-use-plastics issue.

Olivia took the podium before her brother, saying, in part: 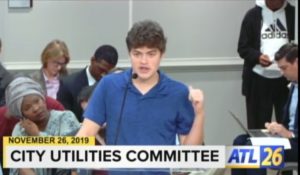 Environmental advocate Carter Ries urged members of the Atlanta City Council not to allow, ‘big corporations put us to the side, and put us in their cookie-cutter profit worlds.’ Credit: Atlanta

Carter’s position directly challenged that of the Georgia Chemistry Council, which represents an array of food service products including single use plastics.

Speaking on behalf of the GCC, Sydney Rubin observed that a ban on single use plastics will require their replacements with materials that are more expensive, sometimes double the cost of single use plastics. The program also has a direct impact on the free market, she said.

“Should the city be picking winners in the free market,” Rubin said.

Atlanta Councilmember Amir Farokhi had already addressed the market aspects of the legislation during his opening remarks. Farokhi is the lead sponsor of a bill that lists 11 co-sponsors.

Farokhi said a resolution related to the proposed legislation calls on the private sector to work with the city to devise ways to reduce the city’s reliance on single use plastics.

Nor does the measure seek to enforce a strict green agenda, Farokhi indicated.

“This is not revolutionary; this is about being responsible,” Farokhi told committee members. “This is about thinking beyond our political terms in office. … This is, in many ways, catching up with where consumer demand and industry is, anyway.”

The proposal follows the Clean Energy Plan the city adopted in March. The plan aims to guide the city’s transition to 100 percent clean energy and shares some similarities with the Green New Deal legislation filed in Congress.