In Decatur, a peek into the mind of Temple Grandin 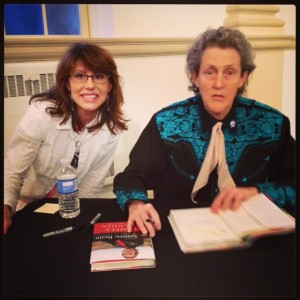 When a fire marshal’s order stopped scores of people from seeing autistic scientist and author Temple Grandin at First Baptist Church of Decatur last week, Paige Mitts snuck in through a side door.

“When you have a child on the H.F.A. (Highly Functioning Autistic) Spectrum, you do what you have to do,” said the Buckhead mother of a child with Asperger’s Syndrome. “You find the right doctor, the right teachers, the right programs.”

And you don’t let a shrimp with a badge stop you from seeing the hero to autistic people everywhere.

Grandin did not disappoint Mitts. The autistic author and professor of animal science and hero of the eponymous Emmy award-winning HBO movie wowed her and a crowd of more than 800 who packed into the pews, the balcony and the choir seats behind the pulpit.

They flocked to this famous face of high-functioning autism, drawn to her gift of describing and communicating her inner life and her willingness to advocate for those with learning disabilities. About 1 in 88 children has been identified with an autism spectrum disorder, according to estimates from CDC’s Autism and Developmental Disabilities Monitoring Network. “I am different, not less,” is one of her famous quotes.

The audience included parents and students of The Community School, which is housed at First Baptist. The school caters to students diagnosed with autism, Asperger’s syndrome and other learning disabilities.

Appearing in customary western wear—a turquoise cowgirl shirt with floral yoke and cuffs and neck scarf tied bandanna style—Grandin spoke for more than 75 minutes, and resourcefulness was a big part of her message.

Grandin talked about growing up autistic, enduring bullying and achieving success. She copes daily by wearing the same style of clothes, and had to quit her favorite store after it switched to “scratchy” fabric. She gets through airports by memorizing photographs of them before arriving for her flight.

Grandin talked about dealing with anxiety and depression, conditions common to people with learning disabilities, and about the importance of finding medication with a “wow factor”—an effect dramatic enough to make it worth taking. 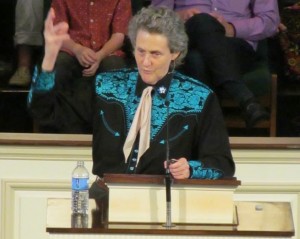 Temple Grandin spoke for more than 75 minutes about her life, her struggles and the human mind. “We need all kinds of minds,” she said. (Credit: Ga. Center for the Book.)

With a slide show that included pictures of her own brain, Grandin talked extensively about the human mind.

“We need all kinds of minds,” she said.

Grandin’s cerebellum, by the way, is 20 percent smaller than a more typical brain, but her visual circuitry is more extensive, which explains why she has trouble with balance but is a gifted visual thinker.

That gift enabled Grandin to develop a revolutionary method of transporting cattle through “curved corrals” at slaughterhouses. Her invention won the praise of animal welfare advocates and leaders of the beef industry alike. Grandin, who was able to see old corrals from the point of a view of a cow, noticed that visual obstructions including simple rays of light were upsetting and disorienting cattle and causing them to stop moving.

Different minds can lead to other better designs that prevent disasters. The March 2011 tsunami-triggered meltdown at Japan’s Fukushima nuclear power plant could have been averted had someone with her visual abilities been involved in the design, Grandin said.

“They made a visual thinking mistake I would never make. I can’t design a nuclear power plant. But someone like me would be the person that would lay the whole plant out,” said Grandin. “I’d be sitting there drawing the buildings and I’d go, ‘Wait a minute, you’re putting in emergency generators for those super important emergency cooling pumps in a non-waterproof basement?’ ”

Grandin divides the world into different types of minds. They include “photo realistic visual thinkers” such as herself, who might draw very well but be poor at algebra; “pattern thinkers” who excel at math or music, but might have problems with reading; and “verbal thinkers” who will know “every fact about everything,” but be poor at drawing.

Grandin urged parents not to punish children by taking away activities that “might turn into a career.” She lamented how schools are increasingly dropping art classes, metal shop and other tactile forms of learning.

“I’ve seen too many kids become video game recluses. And they’re getting Social Security checks playing video games but they ought to be maybe fixing cars or something like that,” she said. “There are all kinds of great jobs in the trades. And we have job openings. The oil industry is going crazy trying to get certified welders.”

“Many talented quirky kids are going nowhere because they have no mentors to channel their abilities,” Grandin said. 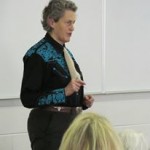 Before her lecture, Temple Grandin met with parents and students of The Community School. (Credit: Ga. Center for the Book.)

One key to Grandin’s development were the rules at the boarding school for gifted students she attended. “One thing they wouldn’t allow is me becoming a recluse in my room. I had to get out and I had to do things.”

So she took care of the school’s horse farm and did carpentry, among other things.

“You can’t just chuck ‘em in the deep end of the pool,” Grandin said of kids who have issues like her. “You’ve gotta stretch ‘em and have known beforehand what you’re going to do.”

Julie Pennington-Russell, the senior pastor of First Baptist, said she “was absolutely blown away by her (Grandin’s) expertise, her confidence and her hopefulness and her ability to break through limitations.”

“What would the world have missed if the world had continued to squash her down, persisted in labeling her, sticking her in her corner and silencing her?” Pennington-Russell asked. “And how often does that happen today? How many will never be heard because it is so hard to break beyond the box?”

Pennington-Russell’s son, Taylor, is a student at The Community School. He said some of Grandin’s story he related to and other parts he didn’t.

“It feels nice to know there are activists out there who are also on the (autism) spectrum,” he said. “It’s good to see other people like me carrying the flag.”

The pastor’s son has just finished his fourth year in The Community School’s adult program. He said he loves technology; because he struggles reading related manuals, he relies on videos. He said he is very good at reading non-verbal emotional cues from other people, and relies on that skill in his job working with autistic children at the Hirsch Academy in Decatur. 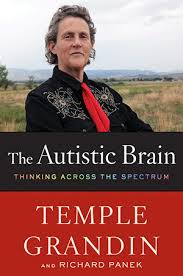 Grandin’s visit was sponsored by the Decatur-based Georgia Center for the Book, the largest nonprofit literary presenter in the Southeast. After the lecture, the book signing table was mobbed by audience members seeking autographs or a copy of a Grandin’s latest book, “The Autistic Brain: Thinking Across the Spectrum.”

Among them was Mitts. She plans to use the autographed copy to help explain her child’s condition when the time is right to tell the child about it.

The herd of autograph seekers was so large and scattered that frustrated event organizers struggled hopelessly to get them in a single line. Perhaps Grandin should have done that for them.

Johanna Smith helped with the reporting of this story. Ben Smith can be reached at benzmyth@gmail.com.