Everything interesting about “Tesla” is on the edges.

Like the macabre modern touches (Industrialist J.P. Morgan’s daughter, the movie’s narrator/potential love interest, coolly googles Tesla and his rival inventor, Edison, noting the latter has more than twice as many entries). 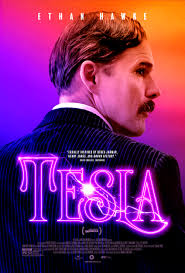 Like the invented scenes (an ice-cream cone battle between Tesla and Edison).

Like Ethan Hawke, who plays the title role, performing Tears for Fears

For anyone who knows Tesla’s story, this must be cinematic catnip. For the rest of us (well, me), it’s more confusing and distracting than entertaining and imaginative.

But still…if your knowledge of Nikola Tesla is pretty much limited to knowing that David Bowie played him in ‘The Prestige” and Elon Musk named a car after him, then Michael Almereyda’s movie becomes increasingly annoying as you realize the director is more infatuated with his own inventiveness than, well, the inventor’s.

First, the Wikipedia entry: Nikola Tesla was a Croatian-born inventor and visionary whose career paralleled Thomas Edison’s. Tesla even worked for the Wizard of Menlo Park, but the two men are mostly known as rivals, especially concerning the matter of electricity.

However, while Edison (well-played by Kyle MacKachlan) was self-confident and world famous, Tesla was the classic outsider, right down to his accent. He’s given to enigmatic pronouncements like, is nature a giant cat, and if so, who strokes its back? 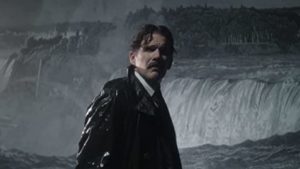 A scene from the movie “Tesla” starring Ethan Hawke

Tesla is precisely the sort of fringe famous person who deserves a biopic, but Almereyda simply won’t play ball. And some of his trickiness is more stealth than anything else.

Okay, who really cares about the truth behind ice-cream cones or if anything, exactly, went on between Tesla and Sarah Bernhardt (who famously slept in a coffin between performances). It is somehow, well, irritating to hear Edison quote his mother as saying: “Never eat anything bigger than your head.”

Because… the phrase is also the name of a rather well-known collection of cartoons by mid-century Playboy regular, B. Kliban. (well, maybe Edison’s mom did say it first…).

The point, I guess, is that the filmmaker treats Tesla as someone who keeps getting in the way of his (i.e., Almereyda’s) story. But Tesla is the story – and I would’ve liked to have known more.

“Tesla” can be viewed through VUDU, Amazon Prime Video or in selected movie theaters.