Whether he’s writing, directing or both, Paul Schrader has pretty much been making variations of the same movie since the ‘70s when he wrote “Taxi Driver.”

When he’s at his best, you get something like, well, “Taxi Driver” or, more recently, 2017’s “First Reformed, starring Ethan Hawke as a soul-searching, self-torturing priest. 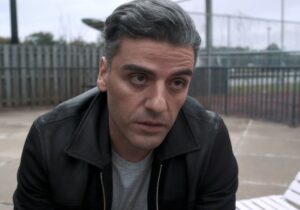 A scene from “The Card Counter”

In “The Card Counter,” which Schrader wrote and directed, the sublime Oscar Isaac plays William Tell, a soul-searching, self-torturing gambler with a clouded past. Before he took to sorting out straights and flushes or adding up cards to the magical twenty-one of blackjack, he worked in a military prison. A notorious prison called Abu Ghraib.

He is, in fact, one of the soldiers featured in the infamous photos taken of the interrogation/torture of prisoners that included such questionable methods as waterboarding.

As a result, Tell did his own prison time, using his years of incarceration to learn how to count cards, i.e., remember whether or not the Queen of Spades has already been played and, if not, where she might be. However, higher-ups who actually bear more responsibility for the Abu Ghraib ugliness, got off unscathed.

That hasn’t necessarily bothered Tell. He spends his time roaming from one mid-level casino to the next, from one anonymous hotel room to the next, betting small, winning small. His purposely self-contained existence works until he runs into 1) his former Abu Ghraib boss, Major John Gordo (Willem Dafoe), who got off with a hand slap and 2) twentysomething Cirk (Tye Sheridan) whose Daddy, also a former Abu Ghraib guard, commits suicide. 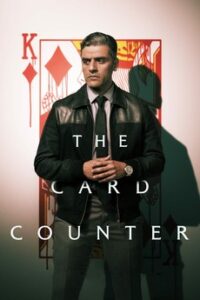 A poster ot “The Card Counter”

Tell takes Cirk under his wing and, in doing so, becomes part of the kid’s quest for vengeance against Gordo. Also, a player in in the movie’s moral rumblings is a cool customer named La Linda (an appealing Tiffany Haddish, asked to play against her natural charm) who spots Tell’s understated expertise and hires him to be part of her stable of gamblers.

Once, there was a kind of built-in allure to Schrader’s mystical, violence-laced musings. But by now, we know the territory about as well as he does. “Taxi Driver” came out in 1976; it’s almost a half-century old.

“The Card Counter” would’ve been fresh in ’76, of interest in, say, 1991, and praised as something auteur-ish in 2004. But now it comes off as another variation on the one trick in Schrader’s one-trick-pony filmography.

The picture isn’t poorly made, and Schrader’s commitment to his bleak vision of all-American desolation remains admirably pure. But overall, it’s a bleak and repetitive effort, a kind of perpetual dark night of the soul that, alas, has become all too familiar.

Sometimes, as Kenny Rogers so famously told us, you gotta know when to fold ‘em.

“The Card Counter” is showing in select theaters and is available on demand.