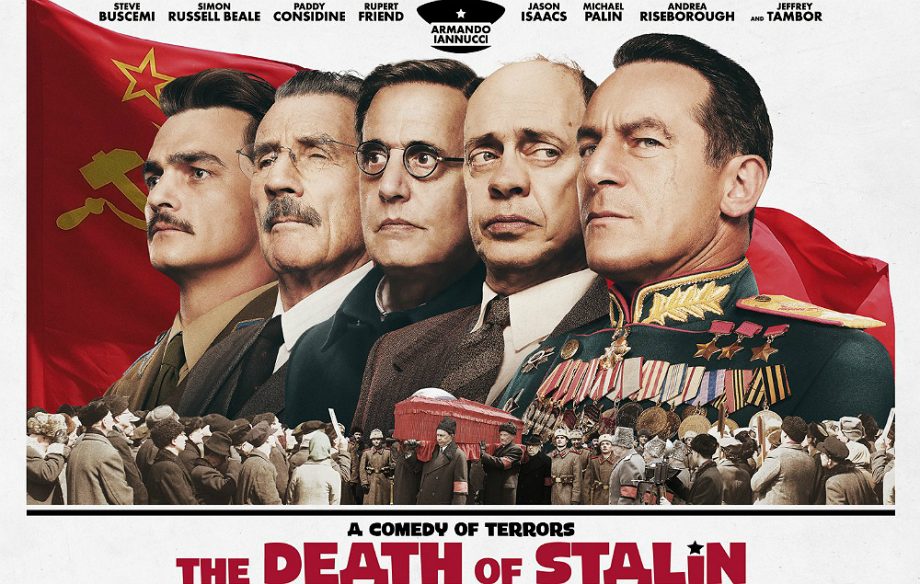 As fans of  “Veep” already know  (and we are legion), nobody does mordant political vaudeville like Armando Iannucci. His touch is swift, sure and utterly poisonous.

No wonder the frenetic power coup chronicled in his excellent new film, “The Death of Stalin,” is as much Monty Python and Marx Brothers as it is social commentary.

It’s 1953 and all of Soviet Russia still trembles at the whims of Joseph Stalin. Witness the opening scene — a Radio Moscow concert featuring a guest pianist (Olga Kurylenko). As the show ends and the audience is filing out, the producer, Andreyev (Paddy Considine), receives a call in the control booth. It is from Stalin himself (Adrian McLoughlin) and he’d like a recording of the concert. 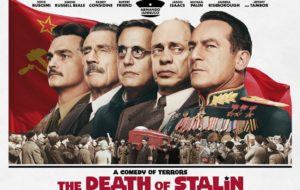 The Death of Stalin movie poster

There is no recording.  Everyone is halfway out the door. Panic reigns as Andreyev frantically rounds up the musicians, finds a substitute conductor (the original faints dead away at the very thought of the mighty Stalin’s displeasure) and hustles whatever warm bodies he can off the street and into the auditorium.

It is on little details like this that a career — or a life — may depend.

A scene or two later, Stalin suffers a stroke, throwing his coterie of political climbers and hangers-on into chaos. Should they summon a doctor? And if so, who? Thanks to their boss, all the good doctors are dead or have been shipped off to the gulag.

Ultimately, it matters not. The stroke proves terminal and now all that’s on everyone’s mind is who will get what (or whom) in the ensuing regime shift. And what a group of aspiring powerbrokers these ruthlessly scheming idiots are. When it comes to lethal clowns, Pennywhistle has nothing on these guys. 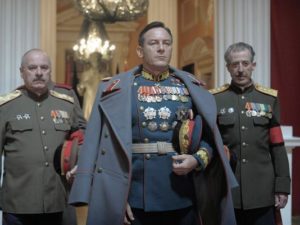 A scene from “The Death of Stalin”

There’s Khrushchev (Steve Buscemi), perhaps the most adroit of the crowd. After every conversation with Stalin, he and his wife assiduously go over his notes.  The dictator laughed at the mention of horses; slippers, not so much. It’s on little details like this…

And then there’s Malenkov (Jeffrey Tambor), the terror-stricken, clueless heir-apparent.  And Zhukov (Jason Isaacs), the preening military hero with a chest of medals worthy of a Wes Anderson Boy Scout leader. And Stalin’s children, the demented hothead, Vasily (Rupert Friend), and his all-too-flustered sister, Svetlana (Andrea Riseborough). And Molotov (Michael Palin), of cocktail fame, who doesn’t always know what’s going on, but certainly knows what’s at stake (his head, for one).

Busiest — and therefor deadliest —is secret police chief Beria (Simon Russell Beale).  He’s the one most responsible for the mounting body count as the others bumble their way through a state funeral and whatever comes next.

If Beale is, perhaps, the first among equals, the rest are right behind, especially Buscemi who is as at home with theatre of the absurd as any actor working today.

Simply being in the presence these accomplished farceurs is both a pleasure and a privilege. “The Death of Stalin” is so good  — and quick — you may want to see it twice.