Eric Bana stars in "The Dry"

The first is set in the present – an apparent murder-suicide in which a local named Luke (Martin Dingle Wall) shot his wife and son, leaving only a baby daughter to bawl uncomprehendingly in her crib.

The second took place 20 or so years earlier – an apparent suicide (or murder?) in which the body of a teenage girl is pulled from a river. 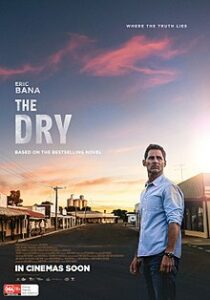 Movie poster of “The Dry”

Oh, and by the way, that river is now dead, too, dried up, as the title indicates, by 324 days without rain.

It’s been years since big-city cop Aaron Faulk (Eric Bana) has been back to his hometown, Kiewarra, the drought-stricken blip of a place he once fled in the aftermath of the earlier death. Somehow, the town decided the teenaged Aaron was the murderer, but then again, it might have been any number of people, including the now-deceased Luke, best friend to both Aaron and Ellie, the drowned girl.

Initially, Aaron returns for one reason – Luke’s funeral. They were once close, and they share a bond that impinges on Ellie’s death. But at the request of Luke’s parents, he stays on to help the out-of-his-depth local cop (Keir O’Donnell).

As Aaron kicks around clues, old wounds resurface. Old feelings, too, especially when it comes to Gretchen (Genevieve O’Reilly), the fourth member of that long-ago teen quartet who frolicked in the river that would become Ellie’s grave. But then, Gretchen is a suspect, too.  She’s awfully good – and blasé – about shooting rabbits, a continuing pest even though, thanks to the drought, there are no crops for them to ruin.

Based on the best-selling novel by Jane Harper, “The Dry” has a welcome Old School sturdiness. We’re presented with multiple suspects, multiple red herrings, multiple motives – all that good stuff that used to power murder mysteries, before car chases and blood splattered corpses became the focal point. 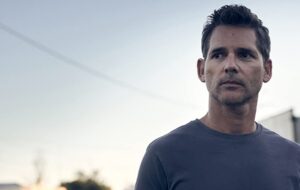 Eric Bana stars in “The Dry”

The small town, of Kiewarra, used-up and narrow-minded, makes a fine backdrop. It’s the perfect setting for old grudges, as dusty and cracked as the riverbed. And the all-Aussie cast provides a juicy collection of bullies, suspects and possible psychos, along with the folks who just want to know who killed their loved ones.

Director Robert Connolly brings a steady hand and a sure sense of what he wants to picture.  He eschews the flash-and-slash of most Hollywood suspense thrillers, trusting the material and his actors to hold an audience.

And they do – especially Bana, who after making a big splash in “Troy,” “Munich” and “The Other Boleyn Girl,” somehow lost his star-making momentum. “The Dry” is a good reminder that he can easily carry a picture, especially one that depends on actors and not special effects.

“The Dry” currently is showing in metro movie theaters, and it is available on Amazon Prime Video.