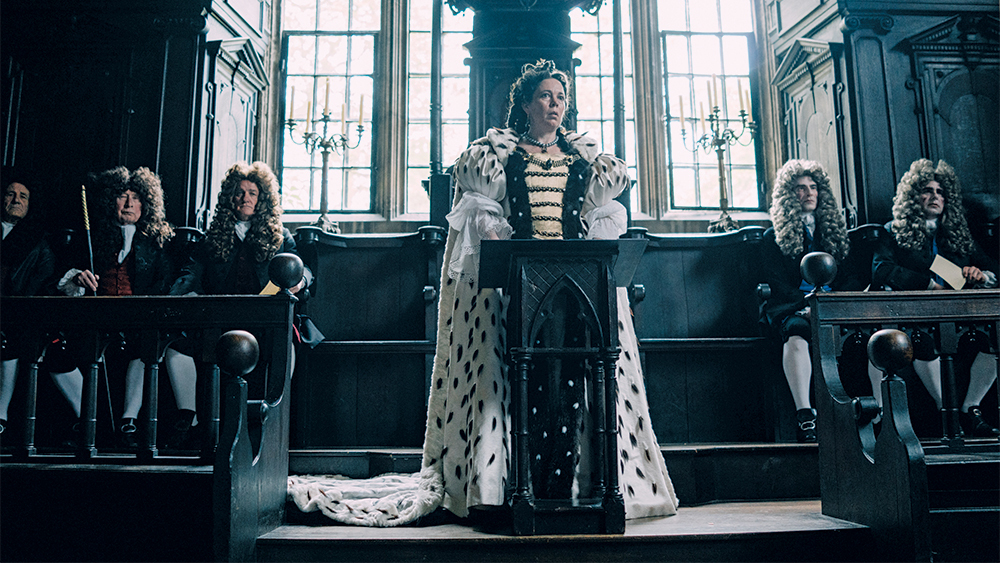 You have to be some kind of an actor to steal a movie from both Rachel Weisz and Emma Stone.

Well, Olivia Colman is some kind of an actor. The extraordinary kind.

She plays Queen Anne, an uncertain and often infantile monarch who ruled England in the early 1700’s. 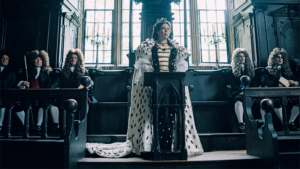 In “The Favourite,” Yorgos Lanthimos’ equally uncertain and occasionally infantile tragi-farce, she is the apex of a romantic triangle: herself, an old childhood friend, Lady Sarah (Weisz), and Sarah’s cousin, a newcomer to court named Abigail (Emma Stone).

Actually, romance is only one aspect of the dead-on rivalry between Sarah and Abigail. Comforting the needy Anne in bed pretty much translates to taking command at court, be it decisions about petty rivalries or matters of war and peace.

Sarah, whose husband just happens to be leading British Army, is already well-practiced in how to handle Anne who, with her gout and her pudge, is something of a laughingstock. What she doesn’t expect is an equally canny rival — for Anne’s affection and her power.

Lanthimos’ “The Lobster” was one of the nastiest and most satisfying films in recent memory. He has a fine time satirizing the willy-nilly silliness of 18th-century royalty. Anne’s gossipy courtiers are decked out in mile-high wigs, heavy rouge, beauty spots — and that’s just the men. 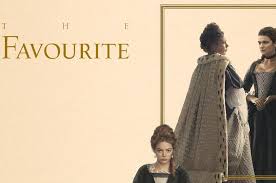 A poster of “The Favourite”

They pass their time racing ducks, shooting pigeons or throwing fruit at a giggling nude man (really). Anne, with her extra chins, her tantrums and her peevish baby ways, is almost a bothersome afterthought. True, she is the Queen and therefore must be dealt with. But how much easier — more preferable — to snicker at her gauche manner and childish misconceptions.  How much easier to get what you want by seeking the ear of her favorite…er, favourite.

Satirizing 18th-century aristocracy, which is pretty much a self-satire, is a daring move by the director. And he pretty much pulls it off. “The Favourite” is full of arch humor and crisp social satire. Peter Greenaway’s brilliant 1982 film, “The Draughtman’s Contract” comes to mind, but truth be told, it is a far better realized bit of wickedness. That’s because Greenaway, kept his picture precisely as heartless and chilly as he intended.

Lanthimos who certainly knows his way around the callous and the cold-hearted, has made one fatal mistake: casting Colman. 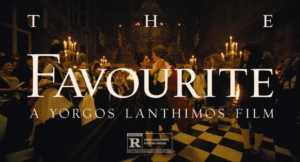 A movie poster of “The Favourite”

True farce demands a total veneer of heartlessness. But Colman, even at her most outlandish, is able to make Anne a recognizably human figure – someone we may laugh at, dismiss or even feel repelled by, but also someone who, ultimately, engages our sympathy.

It’s almost as if the filmmaker didn’t realize what his camera was capturing. As competitive and humorously cruel as Weisz and Stone are – and they are good enough to deserve their own Oscar nods – their efforts and attention are directed at Colman. And Colman is …well, when she isn’t an utter buffoon, she’s heartbreaking.

“The Favourite” is, in many ways, a spectacular film that doesn’t always succeed as spectacularly as it might. But creativity and originality are always welcome and this picture has plenty of both.

And it has Olivia Colman.