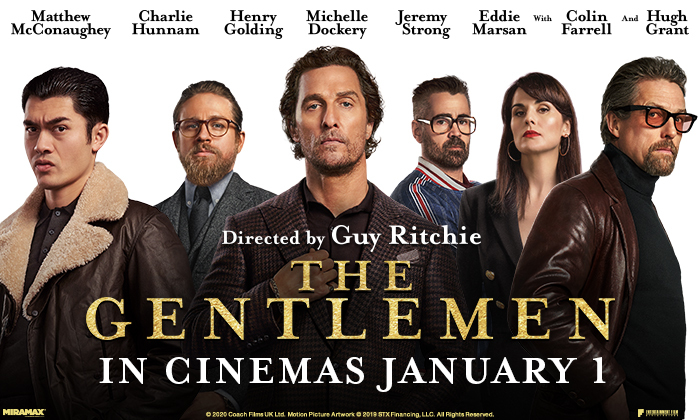 Meaning, I forget about his pleasant but vacuous “Sherlock Holmes” films with Robert Downey, Jr., block out his blockheaded “King Arthur” and make excuses for his useless live-action “Aladdin.”

So thank you movie gods. “The Gentlemen” is a throwback to Ritchie’s uproarious and bloody gangster stuff, stuffed with clever banter, gratuitous violence and a cast who clearly relish every moment on screen. 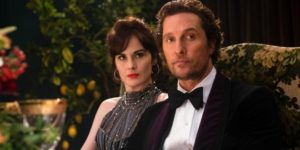 Set in England, “The Gentlemen” is the tasty, twisty tale of ex-pat, Mickey Pearson (Matthew McConaughey giving the Brit tweedy look a go). Mickey is the so-called king of bush – no, not George and family and, no, not the slumming term for a certain part of the female anatomy. “Bush” in this case, is weed, marijuana, Mary Jane, and how he grows it in such copious amounts on a small island nation is something no one can quite figure out.

His secret, revealed early in the picture, is sort of the dark side of Downton Abbey (which makes casting Michelle Dockery, i.e., “Downton’s” Lady Mary, as Mickey’s Cockney crime queen all the funnier). See, those stately homes of England have more acreage than cash and what is M’Lord to do when the place needs a new roof?

Mickey is looking to sell his business before his hands get too dirty and has a surplus of suitors. There’s the Jewish billionaire (“Succession’s” Jeremy Strong). And the Asian-Cockney Dry Eye (Henry Golding). And a potpourri of street punks who have no idea who they’re dealing with.

The movie is framed as a tale told (actually, a script pitched) – by the scummiest of the scum, a private detective/reporter (Hugh Grant) who digs up dirt for a tabloid editor (Eddie Marsan). His audience is Mickey’s right-hand man, a gentlemanly (yes) sort named Raymond (Charlie Hunnam) who keeps the corpse of one of his victims next to the wagyu beef in his posh freezer.

A scene from the “The Gentleman”

As was true of the “Lock, Stock” pictures, a lot goes on and the heavy accents don’t make it easier to follow. Ritchie also glories in being as nasty as he wants to be in whatever way he wishes to be.  Along with some pretty gruesome violence, there’s a “pound of flesh” joke attached to Strong’s character, such as those switching “r”s for “l”s lingual mishaps for Asians.

But somehow, in the context of “The Gentlemen’s” general craziness, it doesn’t matter as much as it might. Plus, all the actors are having a ball, especially a virtually unrecognizable Grant.

“The Gentlemen” may not be everyone’s cuppa’ tea, but in the midst of a dull, wintry January, its devilish spark can be most welcome.