“The Glorias,” Julie Taymor’s take on the life and times of Gloria Steinem, is so muddled and off-putting that I’m going to cancel my subscription to Ms.magazine.

Except…full disclosure…I never subscribed when it did exist. I didn’t even read it. 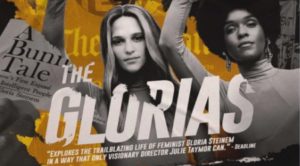 Poster of “The Glorias” movie about Gloria Steinem

The plural title refers to the multitude of Glorias to whom we’re introduced: Gloria (Ryan Kiera Armstrong) as a kid, torn between a depressed mom and a charming (supposedly) hustler of a dad; Gloria (Lula Wilson) as an adolescent, tap-dancing with her BBF (Black Best Friend); Gloria (Alicia Vikander) as a young woman, exploring India and the equally perilous world of Manhattan journalism in the early ‘60s; and, in her best incarnation, the mature Gloria (Julianne Moore) spearheading a movement that brought her both worldwide acclaim and angry personal threats.

The movie is such an unmitigated disaster that’s it’s hard to know where to begin. More time is spent on Gloria’s friendship with a Native American than what happened to the Equal Rights Amendment. A never-seen Betty Friedan (“The Feminine Mystique”) is more demonized than a barely-seen Phyllis Schlafly (who helped defeat the ERA).

Great pains are taken to emphasize the multicultural side of the Women’s Movement (i.e., it wasn’t just a bunch of so-called Karens). But as Gloria is nurtured and partnered by Indian women, Black women, Native American women, Hispanic women, the film falls into an irritating pattern of the white woman empowered by a series of selfless women of color. It does Steinem and, perhaps more importantly, these women a disservice.  And gay women are, like the ERA, pretty much shunted to the side. 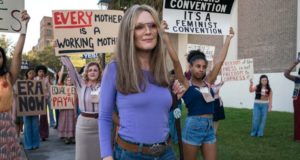 A scene from “The Glorias” – a movie about Gloria Steinem

The presentational style that made Taymor famous – she staged Broadway’s “The Lion King” – is a huge distraction here. In one of the worst scenes, a piggish TV interviewer tells Steinem that she’s “an absolutely stunning sex object,” and suddenly a tornado appears, spinning him into oblivion while all four Glorias cackle like witches from Oz.

The film utterly fails to flesh out Steinem, to give us any idea of who she truly is. Worse, it makes an emotional connection to her just about impossible.

A missed opportunity is probably the kindest thing one could say about “The Glorias.” An excruciating botch is probably more accurate.

“The Glorias” is available on Amazon’s Prime Video.