The Midtown watering hole celebrated 30 years of business on Saturday, April 30. (Photo courtesy of The Highlander)

The folks at The Highlander — an eclectic punk bar in Midtown — just rang in the joint’s 30th anniversary with a birthday bash that left owners closing shop around seven in the morning.

At The Highlander, having a good time is a full-time job. Sitting at 931 Monroe Dr. NE, the bar is open until 1 a.m. most nights, complete with a spacious patio, live music and punk-themed events like karaoke and art shows. 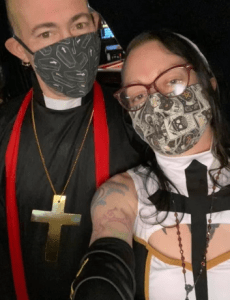 Darby Yale has been working at The Highlander since it opened in 1992, first working as a busboy, bartender and then manager. Previous owner Jeff Merback has recently stepped back from his role, and Yale has taken the helm as part owner along with his wife, Darlene Copeland-Yale and kitchen manager Dave Anderson.

Yale describes the past 30 years as “a wild ride,” watching The Highlander evolve from “a Georgia Tech frat pub to a punk-rock metal bar that still serves the best bar food in Atlanta.”

Loyal regulars and the joint’s top-notch bar food kept The Highlander going for three decades, particularly through the pandemic.

“It’s amazing that we’ve been here for 30 years,” Copeland-Yale said. “That’s a long time for a dive bar in a strip mall. It’s a pride to have a place to be open that long.” 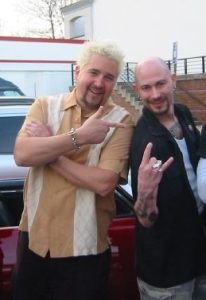 The “pastarella” sticks — pasta wrapped mozzarella sticks — and jerk chili are fan favorites and were even sampled by Guy Fieri during the bar’s 2008 feature on Diners, Drive-Ins and Dives (DDD). The Highlander’s jerk chili recipe is featured in a DDD cookbook, and the duo has signed at least 50 cookbooks for excited visitors.

Fieri isn’t the only celebrity Yale and Copeland-Yale have rubbed elbows with. The two are personal friends with Skid Row and Mastodon band members, and many other big names have swung by for a drink or two. The Highlander staff has seen musicians like Sting, Mick Jagger, Andre 3000, Braves player Dale Murphy and icon Anthony Bourdain.

“Darby probably nearly fainted” at the sight of Bourdain, Copeland-Yale quipped, with Yale laughing in agreement.

Life doesn’t get boring at The Highlander, which is why the duo has stuck around for so many years. Copeland-Yale and Yale have seen it all, but one night, in particular, stands out — when Copeland-Yale had to stop a show because the lead singer was on stage completely naked. But a few months later, he had a job there.

“That’s a great example of how The Highlander is,” she said. “I’m like, ‘You have to turn it off. You’re naked.’ Then seven months later, he’s like, ‘You got a job here?’ and I say, ‘Sure, just keep your clothes on.’”

Another visitor was so enamored with the joint that he recreated the bar in Paris, France.

“He opened a rugby bar called The Highlander with the exact same logo and everything,” Yale said. “Jeff and I walked in there, slapped down business cards on the bar in Paris, and said, ‘Dude, you stole it.’ He was speechless for about 30 seconds, then we’re like, ‘No, dude, it’s cool!’”

Copeland-Yale added, “We even made shirts for a while that said Atlanta, Georgia and Paris, France.”

Thirty years of business is no easy feat, and the duo attributes The Highlander’s success to its eccentric, unique vibe and welcoming atmosphere.

“We’ve got a great, friendly vibe. You have attorneys drinking martinis at one table sitting next to a bunch of mohawked punks drinking pitchers of PBR,” Yale said. “Everybody is welcome.”

After celebrating The Highlander’s 30th-anniversary last month, the pair envisions another three decades of adventures, wild stories and great drinks.

“As long as people are metal and punk rock, we’ll have a place for them to work or visit,” Copeland-Yale said. “Hopefully, we’ll still be providing customers with a good time, good drinks, good food and good music.”