The inventor of the leaf blower on Earth Day: ‘You’re welcome!’

A person using a leaf blower. (Image by Philip Myrtorp via Unsplash.)

It’s been 52 years since the first Earth Day, and now it’s looking just the way we want it — green-colored and tidy! Believe me, it hasn’t been easy. So, you’re welcome!

They say money doesn’t grow on trees, but I’ve been making cash from leaves since I was a kid. Once a year the whole neighborhood would rake their leaves up into huge piles, and at $20 bucks a yard I could make $200 for one weekend’s work. That was crazy money for a 12-year-old back then. You could buy a totally tricked-out Stingray bicycle for $150 and have $50 left to pay your little sister for her help.

What did we do with the leaves? We’d light them on fire and burn ‘em! How great was that? Living was easy for a few years, but after they started the Earth Day thing in 1970 people started worrying about pollution, and we had to stop burning the leaves even though everybody missed the smell.

The problem was that people generally liked leaves, especially their fall colors, and if we couldn’t pile them up and burn them they really didn’t see the harm of having them around. People started raking leaves into gardens or just chopping them up with their lawnmowers. I could still make a few bucks, but I had to let my sister go. Thanks a lot, Earth Day.

I needed to re-establish my financial power. How could I stop people from leaving leaves alone? The answer came right out of baby Earth Day’s mouth. Litter. Get people to treat leaves like litter! Got leaves on the lawn? That’s sloppy. Untidy. Got a leafless lawn? That’s clean. Neat. Like living on a golf course! 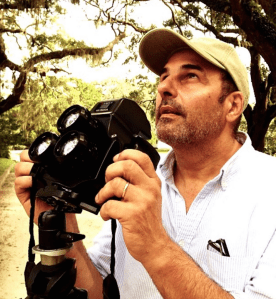 Peter Bahouth is the former executive director of Greenpeace USA, The Turner Family Foundation and the U.S. Climate Action Network.

With leaves rebranded as undesirable, business boomed, but it was more than me and my re-hired sister could handle. Removing litter can become an obsession, and now people want leaves hunted down constantly. I needed to move more leaves.

My first idea was self-driving rakes to eliminate labor costs, but that was too ahead of its time. Maybe the wind would work, but how could I create enough to corral piles of leaves across a lawn? My first thought was helicopters, but they’re not great around chimneys, power lines, outdoor furniture or small pets. Nuclear power was all the rage, but the science was focused on stationary reactors and I needed mobile units. Giant fans could be installed underground and rise pneumatically when sensors detected falling leaves, but you probably wouldn’t want anyone out in the yard during the fall.

Back then everyone figured we would be flying around with our own jet packs sooner than later. A jet pack with a hose attached would do a great job on leaves and get me to work in the morning, but enthusiasm for personal jet propulsion waned when people saw the news about that guy that strapped a couple of small jets to his roller skates.

Sadly, it seemed the only thing capable of generating the insane hurricane-force wind I wanted but small enough to strap onto my sister, was a two-stroke gas engine, and only a sociopath would dare mount the most polluting and noisy engine ever designed onto his sister for 8 hours a day to blow leaves around. Luckily I am one, so problem solved!

Obviously no one would want those filthy things anywhere near their children or torturing their neighbors with their wall-piercing noise. Unless, of course, it meant fewer leaves. I named my appalling invention the “leaf blower.” Genius, right? I mean, it blows more pollution, pollen and chemicals than it does leaves, but “pollen blower” didn’t do well with the ad guys.

Next, where to blow the leaves? Easy, we fill a few bags and make the city pick ’em up and just blow the rest up against fences, onto the street or into creeks. But that’s only in the fall. The rest of the year we just blow stuff around for a while. Business for all you “mow-and-blow” guys couldn’t be better. You get to charge your accounts all year long, and nobody can stop you.

Since then, we’ve grown way beyond our wildest dreams. We’re selling more than 4 million new blowers every year. Money doesn’t grow on trees? You can hear the “cha-ching” for blocks!

Sure, a growing number of people grumble about the noise and pollution, but kids can get asthma from a lot of things, and that old guy’s hearing loss could be from too many Grateful Dead shows. Besides, people that object to blowers are generally considered cranky do-gooders with nothing better to do than harass their neighbors. Nobody wants to hear them whining about the whining. We should be more considerate and kind to each other, and neighbors don’t like neighbors that complain.

And if they’re still upset, let them spend years of their lives trying to ban us. The only law I worry about is one that would require homeowners to actually be home when blowers-for-hire show up. Thankfully people that hire us “landscapers” are usually at work when we show up. There’s no way they’d keep paying us if they saw us just standing around blowing a lot of nothing in spring when the leaves are still seven months away from hitting the ground.

Let’s stay united. Keep up the good work labeling blower complaints “First World Problems.” Other than the impact gas engine blowers have on workers, the elderly and children, it kinda is. Oh, and keep telling people we’ll be switching to electric blowers in five or 10 years, once the technology gets better.

And if your client drives an electric car and thinks an electric blower sounds like a reasonable alternative, just tell them you heard about a guy that caught on fire using one.

Earth Day reminds people to think about humanity’s values, the threats the planet faces and ways to help protect the environment. We’re not monsters. We live on the planet too, and we bring our recycling to the curb each week just like everybody else. Problem solved right?

It may be true that lightning bugs and luna moths need leaves to survive, but so do worms and bugs and things that are dirty. It wouldn’t be right for us to play God by deciding what lives and what dies. Nature is something you go visit, not something that belongs in our backyards. We’ve known that for 52 years.