A stock photo of a court gavel. (Photo by the Tingey Injury Law Firm via Unsplash.)

Behind a new era of gang prosecutions from Atlanta to Augusta is a little-known company’s private technology whose trade secrets leave it defined mostly by what it is not.

Buckhead-based Formulytics, after much cajoling from SaportaReport, described its product as a kind of file management system that helps police and prosecutors coordinate on gang cases. It’s pitched as an alternative to old-school gang member databases that are under legal assault around the country for misidentifications and civil rights violations. As one happy customer, Fulton County District Attorney Fani Willis, recently put it, “it’s not a gang database because a gang database would be illegal.”

“Databases are essentially ‘catcher’s mitts’ that collect what amounts to trivia about gangs which never sees the light of day and cannot be used in criminal prosecution,” said Tom Ratchford, the founder of Formulytics. “Our system is designed to clarify complex investigations against violent criminal enterprises, bringing them into the appropriate court of law.” 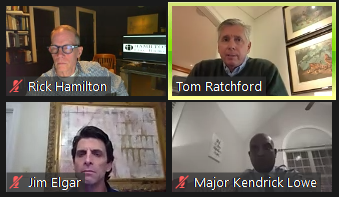 Tom Ratchford, in highlighted box at upper right, founder of Formulytics, speaks about gangs during the March 8 virtual meeting of the Buckhead Public Safety Task Force.

But exactly how alleged gang members’ info is stored and flagged, how the system is tailored for various police agencies, and even the identity of those police customers are proprietary secrets of a company that Ratchford says likes to keep a “low profile.” To Georgia State University criminology professor Volkan Topalli, that raises red flags about transparency and the state’s crackdown approach to crime that echo old gang database problems.

“I’m always very concerned when these things are not transparent. I have a big problem with that,” said Topalli, who was not familiar with Formulytics and spoke generally. “Because it’s a private entity running it, there’s a profit motive involved in that as well.”

With state and local officials claiming the vast majority of violent crime is caused by gangs, Topalli has broader concerns with definitions and data flaws. And he questions the singular focus on policing as a solution, which he describes as having questionable strategic value but definite political worth.

“There’s nothing wrong with trying to identify the extent to which we have a gang issue,” he says. “The question is, are you using that to push other agendas?”

A former U.S. State Department diplomat turned private equity investor, Ratchford founded Formulytics a decade ago after sensing an opportunity in data conflicts between police and prosecutors. The Vinings residents’ company has grown with little public attention aside from a “purposefully vague” website and a 2013 City of Atlanta press release praising it for helping to boost gang arrests and prosecutions as part of the “Atlanta Police Intelligence Network.”

The coincidence of being based in the neighborhood stirred by a cityhood movement based on crime fears has helped to grant Formulytics a rare spotlight. Ratchford was a presenter at the March 8 meeting of the Buckhead Public Safety Task Force, a City Council-approved committee that will issue a report in May on crime-fighting recommendations.

In that meeting, Ratchford barely mentioned his company and instead spoke as a gang expert, though he has no law enforcement background and says his information comes from the “public domain.” Some of his presentation cited such sources as the U.S. Department of Justice, as he sketched out a picture of old-school criminal street gangs being supplanted by national organized crime rings capable of “sophisticated fraud” and paramilitary violence.

Other moments were less solid, such as some “Parental Advisory”-era fretting over superstar rapper Snoop Dogg’s use of Crips gang signs during this year’s Super Bowl halftime show. Ratchford emphasizes Rudy Giuliani’s “cleanup” of New York’s Times Square as an example of gang-fighting success, but Topalli says that incorrectly conflates Guiliani’s “broken windows” policing-and-zoning approach as 1990s mayor and his legal war against the Mafia as a 1980s federal prosecutor.

In the same meeting, a Georgia Bureau of Investigations official described the state’s gang database, comprised of allegedly self-identified or prison-designated gang members. That’s the kind of old-school database that has run into legal trouble for false IDs and guilty-until-proven-innocent approaches.

In 202, the City of Chicago settled with some plaintiffs in one such lawsuit, in part by admitting in writing they were not gang members. Vanessa del Valle, a professor at the MacArthur Justice Center at the Northwestern Pritzker School of Law represented the plaintiffs and tells me they fought an “arbitrary and discriminatory gang database that includes over 160,000 people” – 95 percent of them Black or Latino. Among the many problems, she said, was no due process for getting listed as a gang member, refusal to remove people who were not, lack of analysis of the database’s accuracy, and sharing of its flawed data with “over 500 third-party agencies.”

Ratchford says he’s in the camp that agrees gang databases are of “dubious constitutionality.”

“You look at gang databases being challenged around the country,” he said. “And I think they should be challenged because unless you’re collecting information that ultimately will be made public through a trial, I think these are anecdotes about individuals, and those individuals don’t know they’re sitting in those databases. And that info ultimately should be made public or purged.”

That, Ratchford claims, is exactly what Formulytics does. He says the Microsoft-partnered, cloud-based program mostly translates the lingo of police and prosecutors – entities that can have “Hatfield and McCoy” power-struggle tensions and systemic clashes — for each other so they can track gang cases together. Formulytics processes only active criminal cases, he says, which either eventually go to court or die and are purged. “It’s a judicial-led solution rather than putting a bunch of kids’ names in a database,” he says.

To Ratchford, Formulytics is part of a more surgical crime-fighting philosophy that counters some now unacceptable approaches. He points to the paramilitary approach like the Atlanta Police Department’s infamous “Red Dog” squad, disbanded a decade ago after an illegal raid on a gay nightclub, as raising “social justice concerns that I think are valid.” And a once-trendy approach in sci-fi-style “predictive” policing, where algorithms try to guess where crimes will happen ahead of time, “violates some of what people believe, both on the right and on the left… about intrusive technologies.”

But he also advocates the old-school crackdown tactic of “gang injunctions,” where a court orders gang members not commit crimes or even some legal activities in a certain area under the threat of penalties.

And due to its proprietary nature, it’s unclear exactly how Formulytics handles gang member information or interfaces with more traditional databases. Del Valle says it “sounds like a different beast” than Chicago’s old-school database. Willis, the Fulton D.A., told the Buckhead task force that while the program is not a gang database, it helps in tracking gang members. The 2013 Atlanta press release said it “includes information on gang history, identifiers (graffiti, tattoos, hand signs, etc.) and members” and “automatically alerts” investigators about links to cases that it detects.

The proof may be in the pudding — though there’s the question of which pudding to taste. As a Formultyics success story, Ratchford points to its use last year in the Augusta area in the indictment of 77 people allegedly involved in a white supremacist gang called the Ghostface Killers. Augusta is also where a defendant in a 2019 shooting case challenged his identification as a gang member, an alleged status that had resulted in dozens of extra felony charges and controversy about overly aggressive prosecution before his charges were dropped.

Topalli has noted that defining “gang” and “gang member” is tougher than it may seem. And he questions a focus on police crackdowns when crime-fighting must involve the whole criminal justice system as well as other factors. “I don’t see anybody running [for office] on increasing the funding for the court system,” he says.

One area where Ratchford and Topalli agree is that Buckhead cityhood politics have not been a good lens for viewing crime problems and that more data and processing are needed. “I personally wish we could remove some of the invective around Buckhead and Atlanta and politics and say, ‘This is a [crime] pandemic and let’s start identifying some tools that would ameliorate some of the situation we’re in,” said Ratchford. “…I’m sure you see the same tweets I see about crime in Buckhead, and that’s not solving anything.”

For Topalli, that means a new database coming out of GSU’s Department of Criminal Justice and Criminology. “We right now are proposing to create a data fusion center,” he said, that would combine police data and health data to see connections and fill gaps in both data sets. For example, it would attempt to correlate police gunshot reports with hospital reports about gunshot wounds.

And for Formulytics, it means expansion in an era with authorities apparently largely in agreement on the gang focus. “We’re in all the major metro areas in the state of Georgia,” says Ratchford, “and are now in other states as well as in other countries.”