Sandra Cano, right, the plaintiff known as "Mary Doe" in Doe v. Bolton, at the 1998 March for Life anti-abortion protest in Washington, D.C. Cano became an anti-abortion activist after her involvement in the case. (Photo by Scott J. Ferrell/Roll Call via Library of Congress and Wikipedia.)

The overturning of Roe v. Wade has sparked debate about the ideology of the U.S. Supreme Court and its potential impacts on millions of people. It’s a reminder that, behind the big ideas and legal lingo, every Supreme Court case begins as a local, highly personal event.

Metro Atlanta has been the starting point for several of those cases, including a few landmark decisions. Here, those cases often intersected with racism or government oppression of sex.

As we enter a new era of debates over states’ rights and personal rights, the following is a guide to the local and intimate starting points of those metro Atlanta cases. It’s a list that is sure to grow longer as one day, another neighbor faces another crime, crisis or knock on the door in the night.

Doe was a lesser-known companion to the famous Roe v. Wade abortion case and was heard and decided on the same say in 1973. In successfully challenging an abortion law that was significantly more liberal than the one Georgia has today, the case details some of the human impacts of seemingly abstract legislation. But it also shows the tensions that can arise when activist lawyers find their perfect plaintiff to challenge a law, as the pseudonymous “Mary Doe” later claimed she was manipulated into the case and became a prominent anti-abortion figure.

That plaintiff’s real name was Sandra Cano, then Bensing, who in 1970 was denied an abortion at Grady Hospital under a legal regime that put significant barriers – including medical panel opinions – on doctors’ decisions about using the procedure for the health of the mother. Cano’s lawyer, Margie Pitts Hames, successfully argued that limits had such consequences as arbitrary caps on the number of abortions at any given hospital and a disproportionate impact on poor and Black women. In a foreshadowing of today’s Georgia law granting partial personhood to embryos, the state argued about a fetus’s supposed privacy right to be left alone.

Cano, who died in 2014, had various physical and mental health conditions and a chaotic personal life with a husband who was convicted of kidnapping a child at the time of her court battle, according to books about the case and a 2015 Georgia State University thesis on the case. During the case, Cano left the state, telling Hames she no longer wanted an abortion and feared she would be forced to do so if she won. She won and never had an abortion, in what Hames called a triumph for women’s right to choose.

But Cano remained embittered, claiming she believed she was seeking legal advice for a divorce and that Hames – who died in 1994 – lied to her about the case. Cano repeatedly tried to have her case, as well as Roe, overturned. And now Doe is only a shadow of a precedent as Georgia has a far more restrictive abortion law after Roe fell this year.

This Virginia-Highland house where a gay man’s arrest for sodomy led to an infamous Supreme Court case is scheduled to get a state historical marker this year, a pioneering recognition of LGBTQ history.

In 1982, Michael Hardwick, who worked nearby at a gay bar called the Cove, was cited by Atlanta Police Department Officer Keith Torick for public drinking. Hardwick settled the matter, but after confusion about a missed court date, the officer went to Hardwick’s home with an invalid arrest warrant. Torick entered the home, where he saw Hardwick and another man engaged in oral sex, which under Georgia law at the time could be prosecuted as felony sodomy. Torick arrested both men for sodomy, but the case was thrown out.

Hardwick left Atlanta and died of AIDS-related complications in 1991. Bowers went on to become a high-profile opponent of “religious freedom” laws aimed at restricting LGBTQ rights.

This landmark case affirmed the Civil Rights Act of 1964’s prohibition of racial discrimination in public accommodations like hotels and restaurants. The Heart of Atlanta Motel opened at a prime Downtown location in 1956 and soon became a magnet for protests, with such Civil Rights icons as John Lewis challenging its whites-only bar and restaurant. After the passage of the Civil Rights Act, owner Moreton Rolleston Jr. – who was also a lawyer – made still-familiar states’ rights arguments in his battle to maintain segregation. In perhaps the most odious claim, he even argued that the government illegally made him a slave by forcing him to rent rooms to Black people. The motel was demolished in the 1970s and replaced with the Hilton that still stands today. 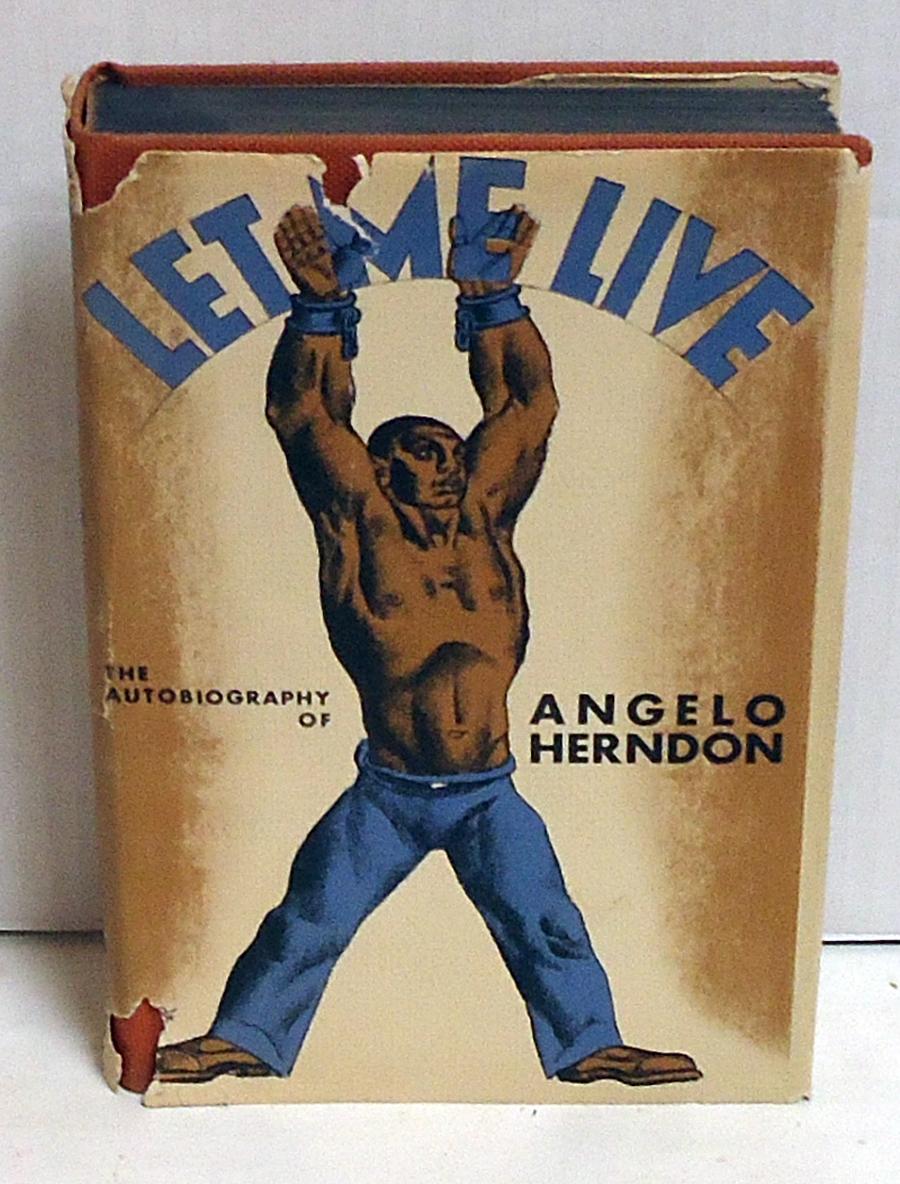 The cover of the autobiography of Angelo Herndon, whose illegal arrest in Atlanta for insurrection was the subject of a U.S. Supreme Court case. (Photo from citynightsbooks on AbeBooks.com)

An important victory for First Amendment rights to free speech and assembly, this 1937 case also marked a defeat for an openly bigoted prosecution of a Black activist. Angelo Herndon was a Communist labor organizer who visited Depression-era Atlanta in 1932. His “crime” was organizing a large, biracial protest by unemployed workers at the Fulton County Courthouse. The protesters demanded government relief payments and got some from the Fulton County Commission. Police later arrested Herndon, seized Communist literature, and charged him with inciting insurrection – a possible capital offense. The arguments were full of racist statements and based on 19th-century laws designed to suppress slave rebellions. After five years of legal combat, the Supreme Court finally ruled that Herndon had simply – and constitutionally – expressed views and organized protests the government didn’t like rather than inciting imminent insurrection.

A landmark victory for freedom of the press came out of a terrible crime that was no cause for celebration — the gang rape and possible murder of a 17-year-old Sandy Springs girl.

On Aug. 18, 1971, Cynthia Cohn had been drinking at a party when she was attacked by a group of high school boys, at least three of whom raped her. Some of them drove her home and left her to die by suffocation on her own vomit.

Cohn’s family feared that her memory would be smeared in the criminal case, but Georgia at the time had a law outlawing the publication of a sexual assault victim’s name. However, the late WSB reporter Tom Wassell said Cohn’s name in a broadcast during the 1972 trial. He had read it off a court document. The family was reportedly inundated with insults from supporters of the rapists.

Cohn’s father sued Cox, WSB’s parent company. The Supreme Court delivered a resounding victory for Cox and established a still-important First Amendment precedent. It says that no one can be held criminally or civilly liable for publishing factual information from a public record. That holds even when it’s bad judgment.

But from the Cohns’ point of view, it was just more injustice in a case where its prosecutor, John Nuckolls, later said the defendants got off lightly. In 2017 interviews, Nuckolls and Stephen Land, the attorney who represented the Cohns at the Supreme Court, told me they still had dark memories. Land dismissed the free-speech idea and worried about victim privacy being left up to, “God, I hate to say it, common decency.” And Nuckolls noted the dark irony that he got the Cohn family’s cooperation by promising Cythnia’s name would never be published – only to see it permanently published in a landmark Supreme Court opinion.

“Yep,” he told me. “After I sat there and looked the father in the eye and said, ‘Her name will never get out there.’”

In 1969, the Supreme Court delivered Stanley a resounding win, saying that mere possession of obscenity in a private place could not be criminalized under free speech rights. The opinion included one of Justice Thurgood Marshall’s most quotable lines: “If the First Amendment means anything, it means that a State has no business telling a man, sitting alone in his own house, what books he may read or what films he may watch. Our whole constitutional heritage rebels at the thought of giving government the power to control men’s minds.” 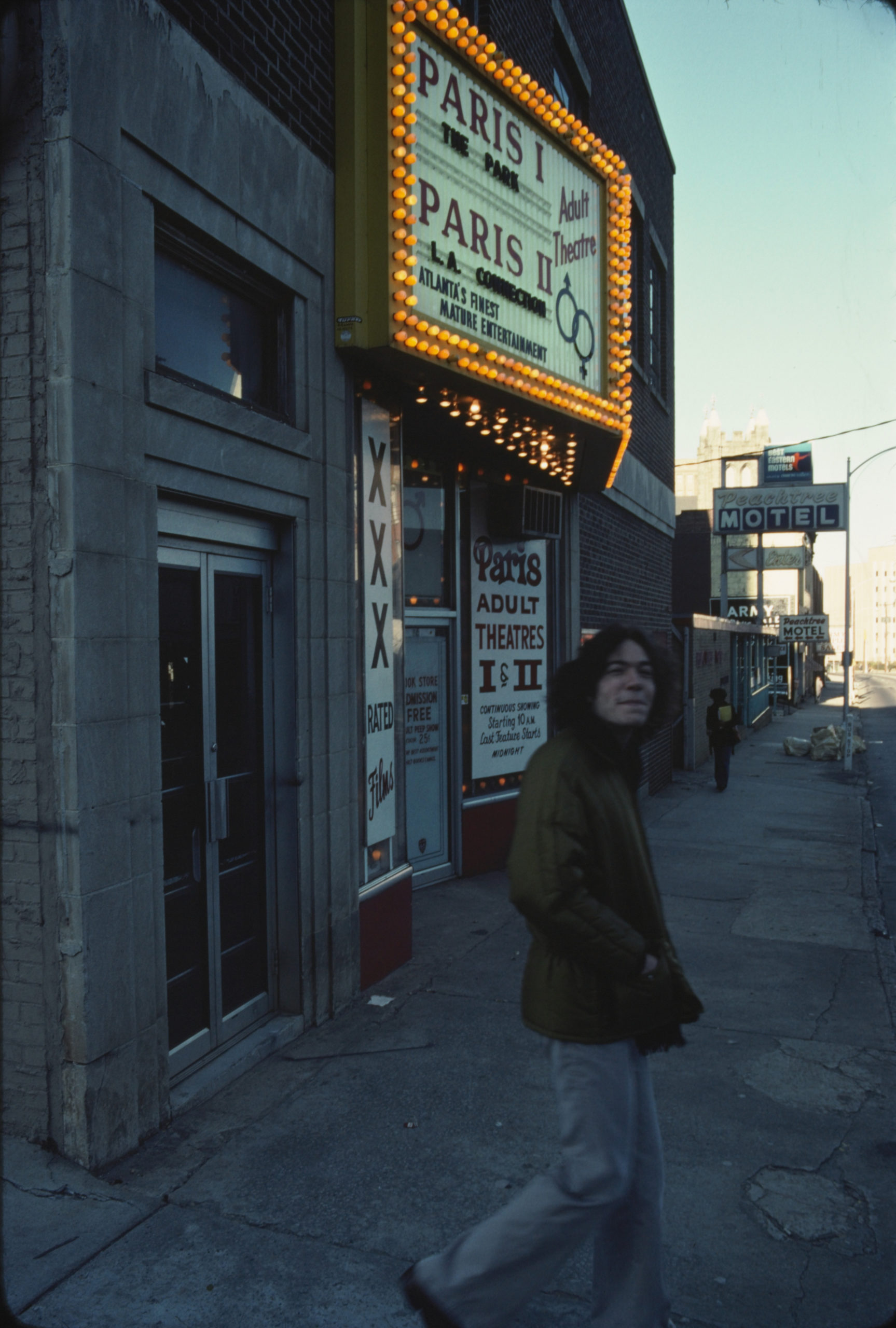 A 1976 photo of the Paris Adult Theatres I and II, which spawned two U.S. Supreme Court cases. (Photo courtesy of Kenan Research Center at the Atlanta History Center.)

In 1972, Georgia played a key role in a landmark Supreme Court decision, Furman v. Georgia, that put the death penalty on hold nationwide as arbitrary and discriminatory, with a Savannah murder and a Coweta County rape among three cases combined in the ruling.

And in 1976, the state played a key role in another decision essentially lifting the moratorium by establishing new guidelines. Gregg v. Georgia was the lead case in another combo decision, and it began and ended with horrific violence.

On Nov. 21, 1973, Troy Gregg was one of two hitchhikers picked up by two men in Florida. The car broke down and a Florida Highway Patrol officer accompanied the owner to a car dealership, where he bought a new vehicle. The owner and his companion again picked up Gregg and the other hitchhiker – who were now aware the men had a large sum of money – and continued into Georgia. At a highway interchange near today’s Mall of Georgia, the driver made a rest stop. Gregg repeatedly shot the driver and his companion, robbed them and left their bodies in a ditch.

Gregg’s legal battle led to him receiving one of the newly authorized impositions of the death penalty. But he was never executed – at least, not legally. In 1980, he and some other prisoners made an unprecedented escape from death row. But the next day, he was found beaten to death in North Carolina, allegedly by a fellow escapee, though no one was ever charged.