If the U.S. Supreme Court kills Roe v. Wade this year, so likely goes its lesser-known companion Doe v. Bolton, a Georgia case whose past may be the prologue of another generation’s abortion rights battles.

Decided alongside Roe and once a contender to be the big precedent-setting case, Doe was a challenge to Georgia abortion laws that were far less restrictive than those ready to go in a post-Roe world. The case aimed at unequal access to legal abortions that helped to launch local activist groups that were informed by groundbreaking national studies by the metro-based Centers for Disease Control and Prevention (CDC).

In the wake of the 1973 Roe and Doe decisions, Atlanta also saw a wave of anti-abortion organizing, including the sort of massive protests and acts of civil disobedience that could return today, though most likely with abortion-rights activists doing the protesting. The era also produced one of Georgia’s most notorious terrorists, popularly remembered as the “Olympic Park bomber” but more precisely a bigot conducting an intersectional attack on abortion rights, LGBTQ rights and globalism — all still interlinked topics in today’s culture wars and post-Roe hypothesizing.

Roe was the sweeping decision that established fundamental abortion rights and laid out when and how they took effect. Doe targeted specific kinds of restrictive laws and has been less influential. In Roe and the later key case Planned Parenthood v. Casey, Doe was used conservatively by the Supreme Court to emphasize those decisions’ holdings that there is no absolute right to abortion on demand. But Doe also eliminated many states’ limits on abortion access — including bans on out-of-state patients, which could be an issue again post-Roe — and certainly had an effect on the local dispute, which was rooted in the ability to get an abortion at Atlanta’s Grady Memorial Hospital. (In the famously leaked draft opinion in the apparent Roe-killing Dobbs v. Jackson Women’s Health Organization, Doe merits a single footnote discussing expansive interpretations of the case’s lifting of abortion limits.)

This overshadowing by Roe and legal nuance had left Doe and its legacy little-discussed, even locally. For much of the local detail here, I relied on a 2015 Georgia State University master’s thesis by Alexandra “Alex” McGee called “The Politics of Protection: The Forgotten History of Georgia Feminists and Doe v. Bolton.” McGee could not be reached for comment on the Dobbs opinion.

Roe and Doe both resulted from the 1960s era when rising feminism collided with abortion restrictions in a majority of states. Georgia saw plenty of activist groups arise, mostly Atlanta-based, including a Planned Parenthood chapter and the Georgia Women’s Abortion Coalition.

The more specific debate that resulted in Doe came, ironically, from what was described at the time as a “liberalizing” of Georgia’s abortion laws to expand doctors’ authority to approve the procedure.

In the late 1950s and early ’60s, the professional medical community joined abortion rights advocacy, in part to maintain control over legal abortions. Another significant factor was enormous public attention to birth defects caused by an epidemic of rubella (German measles) and by a surprise side-effect of the morning-sickness drug thalidomide.

In 1968, Georgia joined a number of states that adopted a new law permitting abortion if five conditions were met:

There were several other additional restrictions and requirements, such as proof of rape.

The law, which took effect in July 1969, was controversial among abortion-rights activists in principle for focusing on the doctor’s, rather than the woman’s, decision. In practice, they objected to its unequal impact on poor and minority women and to its chilling effect on doctors. According to McGee’s study, in 1971, 105 of Georgia’s 159 counties had no accredited hospital. And due to fears of being seen as too permissive by authorities, she wrote, virtually all hospitals “imposed a firm, unspoken monthly quota on the number of abortions — six in the case of Grady — that would be approved each month, regardless of applicants’ individual situation.”

At the same, the CDC was launching an abortion study program whose findings informed the local debate. The big picture was wealthier and white women had better access than poorer and Black women. McGee reports one study that found that from 1950 to 1969, non-hospital abortions killed 205 women in 55 of the 159 counties, 69 percent of whom were Black women (and 88 percent in 1964 to 1968). At Grady, white patients, 40 percent of them from wealthier suburbs, outnumbered Black patients for hospital-induced abortions, despite the hospital’s service community being lower-income and majority Black.

Underground abortion remained a factor. In 1966, McGee’s study says, Grady reported an estimated 250 women a year came for treatment of infection or damage from underground or self-induced abortions. 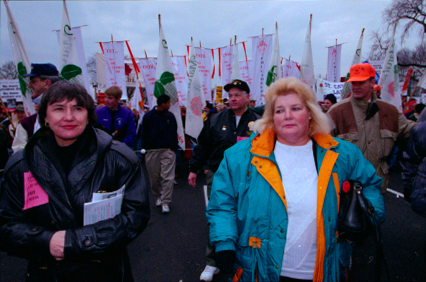 Sandra Cano, right, the plaintiff known as “Mary Doe” in Doe v. Bolton, at the 1998 March for Life anti-abortion protest in Washington, D.C. Cano became an anti-abortion activist after her involvement in the case. (Photo by Scott J. Ferrell/Roll Call via Library of Congress and Wikipedia.)

Against this backdrop came the formation of an advocacy group called Georgia Citizens for Hospital Abortion that aimed to reform the law. Failing that, the group began coordinating with the ACLU’s Georgia chapter to find a lawyer and a plaintiff to challenge its constitutionality in court. Atlanta civil rights lawyer Margie Pitts Hames agreed to join. In coordination with the Atlanta Legal Aid Society and an Emory University law clinic, the team found a plaintiff in Sandra Bensing (later Cano), who had been denied an abortion at Grady and, like the plaintiff in Roe, agreed to be identified by a generic pseudonym (“Mary Doe”) to protect her privacy. Georgia Attorney General Arthur Bolton was named as the defendant.

The Doe team won a federal court decision in 1970, but not an injunction that would actually prevent its enforcement. Under rules of the time, that allowed a direct appeal to the Supreme Court, which in 1971 accepted the case along with Roe. Before the Court, Hames argued about the unequal impacts, while the state argued in part in favor of a fetus’s supposed privacy rights to be left alone, another foreshadowing of the privacy concept that is once again in legal and political tension. As McGee recounts, the Court’s justices discussed the possibility of Doe being the precedent-setting case before settling on Roe.

In 1973, the Supreme Court announced its decisions in Roe and Doe on the same day. The Court did not throw out the Georgia law entirely but invalidated the restrictions on multiple doctor review, residency and similar burdens. Hames, who died in 1994, in a news story of the time called Doe “one of the most important women’s rights cases… If a woman can control her reproductive life, then she is getting a very substantial chunk of freedom.”

Less than a month later, according to McGee, Georgia’s first walk-in abortion clinic opened, in the wealthy suburb of Sandy Springs. In the ensuing years, abortion mortality declined, as did the abortion rate.

But the decisions also were political and cultural A-bombs. Locally, such groups as Georgia Right to Life objected and likened the decisions to the infamous Dred Scott ruling that enslaved people were not citizens. In later years, Cano herself became an anti-abortion activist and claimed Hames had manipulated her into joining the lawsuit. Norma McCorvey, the plaintiff in Roe, made a similar change before late in life recanting that anti-abortion position as well.

Atlanta’s role as a gathering spot for high-profile national events made it a target of protests as well. Thousands joined massive anti-abortion protests at the 1988 Democratic National Convention here, with some harassing clinic patients and doctors. Like today’s abortion rights protests outside the homes of Supreme Court justices, anti-abortion protesters in 1989 demonstrated at the house of Atlanta’s city solicitor against trespassing charges for Operation Rescue founder Randall Terry.

Atlanta saw big companies dragged into the debate as well. Ted Turner, the iconic tycoon who founded CNN and the Turner Broadcasting System, in 1989 announced a pro-abortion-rights TBS program and called abortion opponents “bozos” who “look like idiots.” That sparked more protests at CNN Center.

Terrorism also came to town. Three metro clinics were firebombed in 1984. Then came Eric Rudolph’s 1996-1998 nail-bomb spree, which included the 1996 Summer Olympics in Atlanta; the Otherside Lounge, a Midtown lesbian bar; and abortion clinics in Sandy Springs and Alabama. They were just part of other violence nationwide that included the assassinations of doctors who performed abortions.

The Dobbs opinion leak has been a similar A-bomb. With the post-Roe world looming, it remains to be seen what further political upheaval and grassroots activism awaits. One certainty is that Georgia is poised to have a far more restrictive, six-week abortion limit under a 2019 law ruled unconstitutional but under appeal and essentially frozen in court until the Dobbs ruling is official.

Another certainty quoted by McGee was declared by the CDC doctor who led those 1960s Grady studies: Self-induced abortion is an option “always available to a desperate woman.”