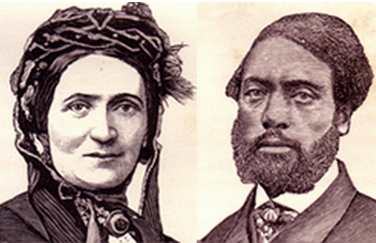 This week guest contributor Barbara McCaskill, a University of Georgia professor, tells how escaped slaves built a community that serves as a model for our times. 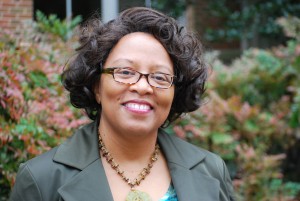 In 1860, on the eve of America’s Civil war, Running a Thousand Miles for Freedom appeared in London’s bookselling district. This memoir was not the first by African Americans to cause a sensation in British markets, yet it ranked among the strangest. Sixteen years earlier, its authors, William and Ellen Craft (1824-1900; 1826-1891), had shocked transatlantic audiences when they fled Georgia as young lovers.

The daughter of an enslaved mother and her white master, Ellen could pass for a white woman because of her light skin and straight hair. Her plan to escape bondage necessitated no assistance from outsiders: her very person embodied it. Over four days, dressed in a man’s suit and hat, with glasses and bandages masking her smooth complexion, she had traveled from Macon to free Pennsylvania. She had pretended to be an ailing gentleman planter seeking a rest cure, “his” faithful servant (her husband William) in tow. 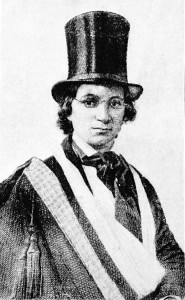 To escape slavery, light-skinned Ellen Craft disguised herself as a male slaveholder. Her husband, William, who was darker skinned, posed as her slave valet. They successfully traveled to the North, and eventually to England, where they published a narrative recounting their lives as slaves and their daring escape.

In railroad cars, horse-drawn carriages, steamships, and hotels, the Crafts risked exposure and discovery. For their audacity to claim their own bodies and lives, they risked, if caught, separation from each other in perpetuity, torture, and other deprivations. In their memoir, verses penned by the poet William Cowper explain why they ultimately settled across the Atlantic: “Slaves cannot breathe in England, if their lungs / Receive our air, that moment they are free.”

My book Love, Liberation, and Escaping Slavery, forthcoming this spring from the University of Georgia Press, evaluates the Crafts’ activism: as abolitionists, educators, and entrepreneurs. Their story features collaboration and partnership, love and courage. It is a messy one: setbacks and disappointments punctuate their lives. As we live now, when the African American president of the United States vies for headlines with news about violence inflicted against black folk like him, the Crafts can offer us guiding paradigms.

Since their story of slavery and freedom is rocky, difficult, and unresolved, it is one for our times. Director Ava DuVernay’s film Selma makes vivid how contemporary southerners continued some of slavery’s old norms. Sickening, thuggish acts, from threatening and shaming language to sadistic beatings to murder, pressured both blacks (Jimmie Lee Jackson, Annie Lee Cooper) and whites (Viola Liuzzo, Rev. James Reeb) into accepting Jim Crow: the social, political, and economic order characterized by white privilege and black disempowerment. Predicated upon the ridiculous division of humanity into black and white, such racialized violence has been ongoing in American society since the transatlantic slave trade. Not counting local rehearsals of terror that did not make headlines and never will, the deaths of Trayvon Martin, Michael Brown, and Eric Garner reinforce the perception that across the arc of the moral universe, where Dr. King and the Movement placed such patient faith, the inclination towards justice has been sluggish.

If the Crafts’ story of slavery and freedom is one for our times, what does it teach us? What they produced — I mean after they left Georgia, in New England, then in old England — was what the Movement perfected: an expansive, elastic notion of community. For example, when slavecatchers stunned Bostonians with warrants for the Crafts’ arrest, an interracial network called the Vigilance Committee sequestered the two in safe houses, and harassed the men wherever they went. In England, British allies helped the Crafts obtain an education and secure employments. 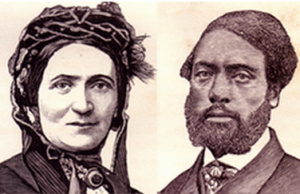 A stirring example of how they benefited from a transatlantic, interracial community involves the Crafts’ search for missing family. Two among hundreds who kept looking for relatives before, during, and after the Civil War (see recent studies by Heather Andrea William and Betty DeRamus), they sold copies of their book and engravings of Ellen in masculine disguise to fund these searches. Grieving for those left behind, they corresponded with white lawyers, clergy, and military personnel to locate them.

Such relationships raised disadvantages, and at worst, could be condescending. Yet, crossing boundaries of class, race, and nationality, the Crafts demonstrated how bridging differences and building connections advance the pursuit of civil rights. This outlook served them in the early 1870s, when they returned to Georgia where they once had been other people’s property — an extraordinary decision! — in order to build and run a farm and school for freedpeople. The Crafts modeled the blueprint shaped later by the scholar W. E. B. Du Bois (1918-63), who lived in Georgia, too. In The Souls of Black Folk (1903), he stressed that work, culture, and liberty equally factored into African American progress. Today’s black business owners, entrepreneurs, and hip-hop artists take a page from these early leaders, who understood that wealth-building and cultural work, in combination, can leverage justice.

Although their farm and school became insolvent, the Crafts’ dreams outlived them. The historian Carter Woodson (1875-1950), who initiated Black History Month, chose their story for the cover of the newsletter he published for African American educators and students. What did Woodson want readers to know? The long march to freedom, from bondage, at the voting booths, for peace, against racial violence, out of hatred, and towards inclusion and tolerance began with people like William and Ellen Craft.

In addition to her forthcoming study of the Crafts, Barbara McCaskill is the co-author or co-editor of three other books.  She is an associate professor of English at the University of Georgia, where she also serves as Co-Director of the award-winning Civil Rights Digital Library.  Currently, she is preparing an annotated edition of Twice Sold, Twice Ransomed, the collaboratively written memoir of black evangelists Emma and L. P. Ray.