Studies in free-floating anxiety are rarely as well done as the one in “The Nest,” a sort of haunted-house movie in which, despite hints to the contrary, the house is probably just fine.

It’s the family who just moved in who’s haunted.

For some reason, director Sean Durkin hasn’t made a movie since “Martha Marcy May, Marlene” – the remarkable 2011 film that introduced us to the Olsen sister with the real talent – not the twins, but sometime-Avenger, Elizabeth.

Whatever the reason for the almost decade-long gap, Durkin is back with a smoothly spooky tale of family implosion.  It’s the mid-‘80s, and the O’Haras come off like the sort of picture-perfect clan who seem to lack for nothing – except, perhaps, a Golden Retriever to lick everyone’s face. 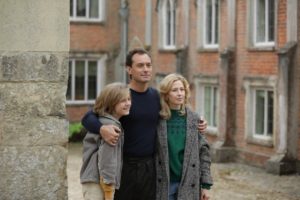 A scene from “The Nest”

Rory (Jude Law) is a go-getter commodities trader who’s done well enough to supply his family with a well-heeled life  – a pool for the kids, Benjamin and Samantha (Charlie Shotwell and Oona Riche), a horse for his wife, Allison (Carrie Coon), who isn’t just some country-club Karen. She gives riding lessons at the stable where she boards. And Rory doesn’t seem like a shallow status-seeker. He wakes Alison up every morning with a kiss and a fresh cup of coffee.

Still, a certain restlessness has set in, and he takes a job back with his old London firm.  The “nest” he finds the family is a huge crumbling mansion outside the city. It’s the sort of place where Led Zeppelin once stayed, and the floors were last remodeled in the 17thcentury. 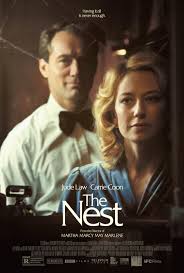 Movie poster of “The Nest”

But something’s off. Things that in a traditional Hollywood movie would amount to another “Paranormal Activity” sequel. The kids are clearly creeped out by the mansion’s musty immensity, and Allison’s beloved horse begins behaving erratically the minute it arrives.

Cracks begin to show – in the family as a whole and in Rory in particular. And then there’s the weirdness at the house. Music left on when no one’s there. A door that was just locked that now…isn’t.

The acting is superb, with Law and Coon giving us versions of marital discomfort – and ultimately utter distress – that make something like “Marriage Story” look like amateur theatrics. The younger actors are equally strong, as is Michael Culkin as Law’s old/new boss whose jolly paternalism can only go so far.

“The Nest” isn’t for those who like their movies neatly plotted and prettily tied up at the end. It’s more like a character study of a family in crisis.  As such, it’s disturbing and elusive – and hard to shake.

“The Nest,” which premiered at Sundance in January, is available for viewing on VUDU, Amazon Prime Video and Apple TV.

Previous Article
Turning Over a New Leaf: From Feeling Grateful to Living our Gratitude
Next Article
Couldn’t hold him down