The new PROPEL Center will be built at Clark Atlanta University

Clark Atlanta University has been selected to be the site of the new PROPEL Center, a global innovation headquarters of Historically Black Colleges and Universities (HBCUs).

The global HBCU technology and innovation hub is committed to strengthening the Black talent pipeline. It will be constructed at 635 Atlanta Student Movement Blvd., at Parsons Street between Vine and Elm Streets on the former site of the University Plaza Apartments, which housed the Birdcage, a popular nightclub at the time.

A personal note: My father, I.E. Saporta, designed the University Plaza Apartments in the mid 1960s. The two doughnut-shaped buildings were constructed by H.J. Russell Construction Co. T.M. Alexander and Harold Dawson were the developers. The round buildings were later torn down.

A rendering of the University Plaza Apartments, designed by I.E. Saporta.

The location is an approximately 5.2-acre site that holds special historic and cultural significance to Clark Atlanta University and its alumni who once called the location their home away from home. The location is historic to the Black community as well, given its proximity to the original location of Friendship Baptist Church, Flipper Temple A.M.E. Church, and other local African American institutions.

The location offers to PROPEL a unique opportunity to build upon the legacy of the AUC through long-term leasing with Clark Atlanta University, providing options for future development on the property.

“Here at Clark Atlanta University, our leadership, faculty, and students are humbled to be a partner in the launch of the PROPEL Center and to have the opportunity to execute this long-term partnership,” CAU President George T. French, Jr., said in a press release. “The progress of the PROPEL Center, and its journey to fruition, have been steady and rewarding to watch. We are proud to see this important next step being so boldly taken.”

French, in a text on Sunday, wrote: “Just to think. Your dad thought about and studied that property so many years ago.”

French continued: “It’s so exciting for Clark Atlanta University to have an opportunity to reactivate this major parcel of land known as the Birdcage. Upon this parcel so many memories were made for students, faculty, staff, and the community. I must admit that the architect for Propel will have large shoes to fill, as I’ve seen the renderings of the uniquely shaped and designed building that was on the site previously.”

The PROPEL Center will support Clark Atlanta University, the Atlanta University Center and the entire HBCU community, which includes more than 100 colleges and universities, through a robust virtual platform accessible to all HBCU students and faculty.

The founding partners, Apple and Southern Company, along with strategic partner the Walt Disney Co., have each made major investments toward the development and launch of the center.

PROPEL is designed to provide innovative curricula, work-based learning experiences, advanced technology support and unprecedented career and leadership opportunities. The hub will further work to deliver an array of strategic resources, preparation, and industry access across the Black collegiate community to support their work in producing the next generation of scholars who will champion equity, justice and entrepreneurship.

The PROPEL Center’s curriculum options will include agricultural technologies, augmented reality, social justice, health, hospitality energy, arts and entertainment, along with career preparation and entrepreneurship tracks. Construction is scheduled to begin in early 2023. 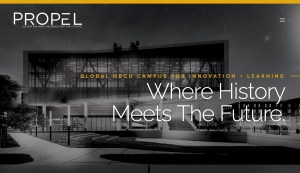 “In just a year, PROPEL has co-developed programming with HBCUs that will inspire new curriculum and learning experiences in health, arts & entertainment, and social justice,” said L. Waymond Jackson, interim CEO of the PROPEL Center, in a statement. “Once complete, the PROPEL Center will build upon those efforts by providing an innovative learning space for all HBCU students. We are excited for the PROPEL Center to be built on a site that has such historical significance as the Birdcage. This one-of-a-kind project creates a great opportunity for us to honor the past while also building a transformational experience that changes the future of HBCU students.”

Lisa Jackson, Apple’s vice president of environment, policy and social initiatives, is looking forward to collaborating with the HBCUs.

“We are proud to support the PROPEL Center’s mission to empower the next generation of Black scholars, innovators and entrepreneurs,” Jackson said in the release. “Propel’s new campus in the heart of Atlanta is well-positioned to create exciting opportunities for learning and collaboration within the HBCU community.”

“This is a thrilling and pivotal next step in the construction of the PROPEL Center’s physical campus in the heart of the Atlanta University Center,” Fanning said. “As a founding partner, we are honored for the opportunities to help forge change and make intentional investments that advance equity in education for the entire community of HBCU students.”