Scene from "The Outfit"

The best play I’ve seen this century is called “Jerusalem” and it starred an actor I’d never heard of.

His name is Mark Rylance, and I’ve sure as hell heard of him now. You probably have, too. He won an Oscar for his supporting role as the Russian agent in the Spielberg movie, “Bridge of Spies,” and he pretty much stole “Don’t Look Up” (what there was worth stealing) from an all-star cast that ranged from Leonardo DiCaprio to Meryl Streep.

So, when I was scrolling through the list of titles on Amazon Prime and saw his name attached to something called “The Outfit,” I thought, well, worth a try. 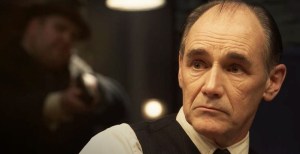 Actor Mark Rylance in “The Outfit”

It is far more than worth a try. This complex, twisty and hugely entertaining film from Graham Moore (an Oscar winner for the adapted screenplay of “The Imitation Game”) is so cleverly constructed, you may want to see it twice.

The picture, set in Chicago in 1956, takes place in a single setting: the tailor shop of Leonard Burling (Rylance), a spindly, mild-mannered Englishman who learned his trade on “the Row,” as in Savile Row in London. Only, as Leonard himself points out, he isn’t a tailor. He is someone far more gifted: a cutter. It takes him 38 pieces of cotton, mohair or wool and 228 steps to join those pieces. He doesn’t call himself an artist, but he is, he says proudly, a craftsman.  And something of a specialist in the study of human nature. “You can’t make something good until you understand who you’re making it for,” he insists.

But his shop, which is located in an unprepossessing part of the city, has a dual purpose. His very first customer when he relocated from London was the neighborhood’s Irish godfather, Roy Boyle (the wonderful Simon Russell Beale). Not surprisingly, perhaps, L. Burling, Bespoke Suits now serves as a front for certain criminal activities, a kind of personal post office for local mobsters who need to drop off…well, Leonard doesn’t want to know. He keeps his head down and concentrates on his work. He expects his lively, attractive receptionist Mable (Zoey Deutch) to do the same.

However, things are getting complicated. One night, when Leonard is working late, Roy’s doltish son Richie (Dylan O’Brien) and his ambitious colleague Francis (Johnny Flynn) show up following a confrontation with a rival gang. Blood has been spilled.

A further complication: there’s a rat somewhere in Boyle’s mob, a rat who’s made an incriminating tape (read, the movie’s MacGuffin). Unless the rat and the tape can be found, well, things will get more complicated. 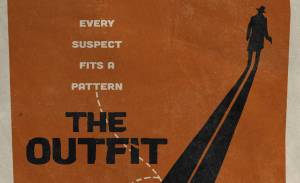 Movie poster of “The Outfit”

With its confined setting and heightened theatricality, the film suggests it started out on stage. But it didn’t. Moore and co-writer Johnathan McClain have merely created an ingenious mobster mock-up, part David Mamet, part “Guys and Dolls.” (For instance, you don’t take a bullet to the gut; you take a marble).

The tone is simultaneously jaunty and murderous. Sometimes you’re laughing and sometimes you’re hiding your eyes from all the blood. Mostly though, you’re mesmerized, deliciously astonished by the next elaborate lie, the next confrontation.

The cast is a collective marvel, from Beale’s block-shaped, brutally confident mob leader to Deutch’s tough but vulnerable Mable, trying to hold her own in a testosterone-fueled world.

However, “The Outfit” is unimaginable without Rylance. His Leonard is a model of precision. Like a perfect gentleman’s valet, he is rigorous and polite, unfailingly observant, and beguilingly obsequious – as scrupulous with people as he is with fabric. And, of course, he’s the most dangerous man on screen because he is, after all, Mark Rylance, the heir apparent to Anthony Hopkins and as good an actor as we’ve been privileged to see in the last decade or so.

As Mable says of her boss, “He cares about what he does and that’s why he’s the best at it.”

“The Outfit” is showing at Regal Tara Cinemas and is available on Amazon Prime.