The perseverance of Morris Brown College: The beginning of the end… or is it?

Next year will mark 20 years since the Historically Black College lost its accreditation preventing students from receiving federal financial aid and grants from the U.S. Department of Education. This first of a three-part series will present a rocky history with a glimmer of hope.

In 2002, the box office hit Drumline brought the rivalry between Morris Brown College and the fictional Atlanta A&T to the silver screen, but before the movie made it to DVD, a very real drama was playing out at the historic institution.

When alumnus Jeffery Miller heard the news that MBC’s collegiate accreditation was revoked from the Southern Association of Colleges and Schools (SACS), he was on his way to work and listening to the radio. When the host asked callers if his alma mater should be saved, he immediately picked up the phone.

From his memory, Miller’s response was, “Morris Brown is not an institution that has been [put] together for some esoteric reason, it was designed and built to educate those who had no other options.”

To many, the announcement that the school would lose its accreditation seemed to be out-of-the-blue, but the decision from SACS to revoke was over three years in the making.

A federal criminal case alleges that in 1998 that former president Dolores Cross and then financial aid director, Parvesh Singh, sent false reports to the Department of Education listing names of students requiring financial aid. The problem was, many of those students weren’t enrolled at Morris Brown.

According to The Chronicle of Higher Education, the indictment alleges that Singh obtained more than 1,800  loans and Pell grants (totaling $3.4 million) for ineligible students, many of whom had never attended or were no longer at Morris Brown.

The ins and outs of the financial impropriety will be explained more in the second installment of this series, but suffice it to say, the alumni were rattled by the news.

When 2001 graduate Keion Edwards initially heard about these issues in the early 2000s, he didn’t know how to respond. The Michigan native is the first in his family to go to college, and he didn’t understand what it meant at the time.

His current reaction is still bewilderment. He sums up the situation in one thought: “That’s messed up!”

He told SaportaReport that the ones responsible were held accountable, but “[students] still have these loans that we have to pay back,” while the loan companies were “after us for their money back.” 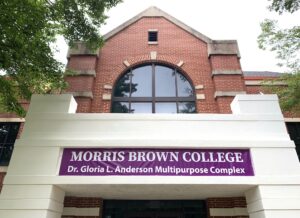 As recorded in 2000, over 80 percent of the 2,500 enrolled students had some form of financial aid, resulting in the Department of Education giving Morris Brown almost $8 million in financial aid that year.

Miller, a member of the famous Wolverine Marching Band in the late 80s and early 90s, proudly says that he was at MBC during its heyday.

He said enrollment increased after leaving in 1993 and that “we had a really strong nursing program, accounting, business programs,” and mentioned the school’s dual degree architecture program with Georgia Tech.

With being close to $23 million in debt due to fraud, unpaid bills and back pay to professors and staff by 2001, SACS decided to revoke Morris Brown’s accreditation due to financial mismanagement in 2002. The decision meant that students studying at Morris Brown could not apply for financial aid or scholarships from the United Negro College Fund.

When Miller decided to return to MBC in 2012 to complete his studies in organizational management, he was more determined than ever to “do whatever I need to do to help Morris Brown remain open.”

Miller’s passion for restoring his beloved school is admirable, but is it possible for an institution to recover after such a major downfall?

The second part of this series focuses on the events after the revoked accreditation and how a determined president is making strides to reclaim what is lost.