Scene from the Starling

“The Starling” is for the birds.

A confused and unconvincing drama about grief, the film draws you in with its powerhouse cast, headed by Melissa McCarthy, and its respected director, Theodore Melfi (“Hidden Figures”).

But before the first 20 minutes are up, you realize you’ve made a bad choice – as did McCarthy and Melfi. And Chris O’Dowd and Kevin Kline and, in a blink-and-you’ll-miss-him role as a hospital worker, “Hamilton” Tony-winner, Daveed Diggs.

Did none of these people read the script? A scene from “The Starling”

In a brief prologue, we meet Lilly (McCarthy) and Jack (O’Dowd), giddily painting the nursery before the birth of their first child.

Cut to several months later. She’s sleepwalking through her job at a bright-n-shiny giant supermarket. He’s…well…he’s in a psychiatric hospital after a failed suicide attempt. What has happened?

Tragedy. Their baby daughter is dead, a victim of SIDS. Lilly’s choice has been to forge on through her grief. Jack’s was to give up. Now she visits him once a week at a mental health facility.  In one of the movie’s few good moments, Jack confesses to a therapist, “My wife wouldn’t know how to quit, and I hate her for it.”

The movie’s plot, such as it is, kicks in when Lilly decides to rehabilitate their garden – planting as a metaphor for moving on and all that. But wait…we’ve got more metaphors to come. Her outdoor activity has upset a starling whose nest is in a nearby tree. The darn CGI thing dive-bombs her repeatedly, to the point that she begins wearing a football helmet for protection.

Could the bird be a stand-in for…. grief?

Well, you’re ahead of me. And the rest of the movie.

A hospital worker suggests Lilly see Dr. Larry Fine (Kline). Not the Larry Fine from the Three Stooges (a joke the movie itself makes), but a former therapist turned veterinarian. However, he’s still as good at handling troubled minds as he is neutering a Boston terrier.

Movies about grief can be difficult to pull off, but it can be done – and done magnificently. Check out “Moonlight Mile” or “The Son’s Room,” both of which deal with the death of a child. 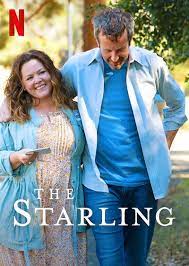 Poster of “The Starling”

But “The Starling” just won’t fly.  The stand-off with the pesky bird seems forced and even a little silly – like something the guys at Looney Tunes might’ve dreamed up. And the scenes between the actors lack both focus and force. Imagine how messed-up a script would have to be to muck up a confrontation between McCarthy and Kline.

Ultimately, one sticks with “The Starling” out of some misplaced sense of loyalty to the creative energy being squandered. But you’re wasting your time. This movie doesn’t get better. It just gets to the final credits.

Insider Addendum: “The Starling” script has been floating around Hollywood for years as part of something called the Black List, i.e., a list of great screenplays that have inexplicably never been produced. Maybe someone should take a closer look at that list.

“The Starling” is available through video on demand and in select theaters.