In January, Macy's, Inc. announced the closing of 45 retail stores including its Greenbriar Mall location in Atlanta. Credit: Kelly Jordan

When news that Macy’s was closing its doors for good, many started to ask, “what does this mean for Greenbriar Mall?”

Shoppers in the metro area have one less department store now that Macy’s has shuttered its Greenbriar Mall location after being open for 56 years.

Worried the closing of Macy’s would precipitate more closures in an area that’s already underserved, Sherry Williams, a political consultant and Greenbriar neighbor, went numb when she heard the news.

At the beginning of the year, Macy’s announced that they were closing 45 locations nationwide and 80 additional stores by 2023. Their Greenbriar location was the only store closing in Georgia.

Willie Woods has owned the barbershop in Greenbriar Mall for over 34 years and has seen it change throughout the decades.

He said he was not surprised when Macy’s announced their closure; he had heard rumors that they were leaving for a long time. 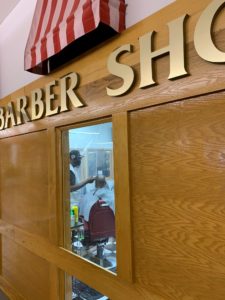 “[The mall] has been on the chopping block for years,” Woods said.

When the residents of the Campbelton Road Corridor heard this news, many contacted their Councilwoman, Marci Overstreet. Greenbriar Mall is part of Overstreet’s district, and she went to work to get the answers her constituents were looking for.

First, Overstreet spoke with the owner of the mall, Charlie Hendon of Hendon Properties. She also spoke with representatives from Invest Atlanta, the Fulton County Commissioners office and other developers about her aspirations for the mall, and plans for the greater economic impact on the community. She held a virtual town hall meeting in February to discuss these plans and ideas with residents.

The councilwoman told SaportaReport, that the town hall meeting “opened a dialogue about how we can work with Greenbriar.”

Charlie Hendon, the owner of Hendon Properties, still sees great potential in Greenbriar. He feels that it was a great investment for his firm, and looks forward to the mall’s continued success in the future. Macy’s closure, he said, didn’t discourage him. The store wasn’t attracting many customers and was no longer economically viable.

“Since Macy’s closed the interior of the mall is about 85 to 90 percent leased and we’re very happy with it,” Hendon said, adding that regular Macy’s shoppers looked for alternative options inside the mall instead of traveling to another Macy’s location like Northlake Mall or Lenox Square.

Woods, being a vendor in the mall for so long, feels that changing demographics were part of Macy’s ultimate closure. Shoppers were looking for “urban clothes” instead of the merchandise Macy’s was trying to sell, he said.

If you look at the Mall today, it appears Woods is correct. Men’s fashion retailers, in particular, are thriving. 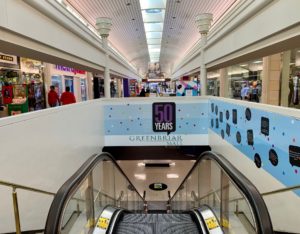 Jai Bludson, manager at Fly Gear ATL — one of the boutiques catering to men — says she’s seen an increase in sales since Macy’s closed its doors.

“We get a lot of different people who are coming through,” said Bludson “and maybe pick up a turtleneck or some jeans.” It appears Bludson is being modest, though. Some of their clientele include the rapper Boosie Badazz, comedian DC Young Fly and civil rights activist, Rev. Al Sharpton.

Additionally, Bludson said Fly Gear ATL benefited a lot from the out-of-town shoppers the NBA All-Star game brought to the city and to the mall.

However, despite the success of some of the mall’s retailers, Macy’s departure was unsettling for many community members. Sherry Williams feels like, as a resident and shopper of Greenbriar Mall, she is being left in the dark about the mall’s future. “The lines of communication need to be open for everybody,” Williams said, “and uncertainty is not good.”

This is part two of a three-part series. Next time, SaportaReport will try to answer the question, “what is the future of Greenbriar Mall?”