Scene from "The Tragedy of Macbeth"

“Fair is foul, and foul is fair” is a very Coen brothers’ sentiment. So, it is perhaps not so surprising that a Coen, in this case, Joel, has tackled the Scottish play, as it is known in the super-superstitious theatre community.

Shot in haunting black-and-white, “The Tragedy of Macbeth” begins slowly, even hesitantly, but steadily accrues power as it goes along. By the end, when Macbeth (Denzel Washington) and his Lady (Frances McDormand) are swallowed up by fate and misplaced ambition, you may still have questions about Coen’s approach, but you’ll feel every iota of the play’s bleak power. 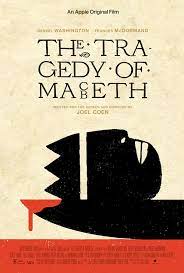 Movie poster of “The Tragedy of Macbeth”

The film begins weakly with the too-self-conscious choice of contortionist Kathryn Hunter to play all three witches whose prophecy first sets Macbeth on his journey to self-destruction. Part Andy Serkis as Gollum, part Figure of Death from Ingmar Bergman’s “The Seventh Seal,” Hunter is more a distraction than anything else. Still, she gets her plot point across: Macbeth will be King of Scotland, but his comrade-in-arms, Banquo (Bertie Carvel), will beget kings.

One small problem: Scotland already has a king, Duncan (Brendan Gleeson), and he’s just named his son Malcolm (Harry Melling) as his heir. Still, Duncan is staying overnight with the Macbeths and…is that a dagger I see before me?

Well, said dagger ends up in Duncan’s throat (the scene is both brutal and touching), with more corpses to follow. Macbeth and his Lady go blood simple, to coin a Coen reference, and ascend the throne. But uneasy are the heads that wear the crown, to coin a Shakespeare reference.

Patience is a factor in the Macbeths’ ascension, too. Washington and McDormand are older than the couple usually is played, and you have a sense they’ve been passed over before – that they don’t have many chances at the throne left.

This is especially evident in Washington’s early readings; he’s hoarse and worn-out and hard to understand (and as anyone who saw him in the Kenneth Branagh “Much Ado About Nothing,” he’s more than capable of handling Shakespeare). It turns out his weary Macbeth is a choice. The more he gives in to his ambition, the stronger he becomes. Murder wakes him up. 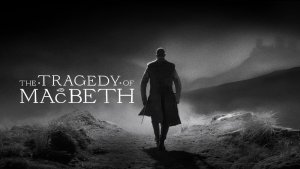 “The Tragedy of Macbeth” movie

By contrast, McDormand starts out focused and grows more scattered. Her celebrated mad scene is both poignant and horror-movie disturbing.

Coen’s film often comes off like a horror movie. Curtains billow along ghostly corridors. A child is killed in a terrible way. The castle itself is a model of German Expressionism, forbidding and oddly angled. And everywhere nature intrudes, whether as an angry flurry of autumn leaves or a sudden murder of crows (yes, that’s what it’s called, like a herd of cows).

Coen and his estimable cast have delivered a quirky “Macbeth,” one that is somehow simultaneously cinematic and theatrical. It may not work for everyone – or even work all the way through. Still, it definitely is worth your attention, whether you’re a fan of Washington, McDormand, Coen or even, God bless him, Shakespeare himself.

“The Tragedy of Macbeth” is showing in local theaters, and it is available for viewing on Apple-TV+.