J. W. Dobbs Elementary School was one of the first schools to participate in the Atlanta Community Schoolyards project. (Photo courtesy of The Trust for Public Land)

Can you walk to a park from where you live? How long does it take to get there?

The City of Atlanta has 416 parks, according to the Trust for Public Land. That puts 72 percent of residents within walking distance of a park, higher than the national average of 55 percent, but still leaves 136,058 people living further than a 10-minute walk to a public park.

The folks at Georgia Trust for Public Land (TPL) are always looking for ways to reduce that number, in line with the national organization’s goal to ensure that a park is just a 10-minute walk from home for everyone in America.

When considering how to serve the 28 percent of Atlantans in a “park desert,” they thought, instead of scoping out space for new parks, why not use what the city already has?

After running an analysis, they found that opening all Atlanta public schoolyards to the public would offer park access to about 40,000 more residents, according to George Dusenbury, Georgia state director of The Trust for Public Land. Nationwide, the reach would be around 19.6 million.

The team began identifying local schools in park deserts and invited them to apply. The Atlanta Community Schoolyards project, in partnership with Park Pride and the Urban Land Institute, kicked off in 2018 with a pilot program of 10 local schools.

The pandemic delayed some progress, but Kimberly Elementary and John Wesley Dobbs Elementary now have reinvigorated outdoor spaces that neighbors are welcome to enjoy.

According to Dusenbury, safety concerns haven’t come up regarding the new public parks.

“The public is not allowed there when the schools are in use, so we have signs to relay that,” Dusenbury said. “We have not seen safety being an issue during school hours because you will have adult supervision. And largely these areas do have some restricted access, a lot of these schools have fences and gates around them.”

The idea isn’t just to open the space to community members but also to work with the elementary students to improve their school. During the planning phase, the kids helped decide what they wanted in the new design and even talked budget. 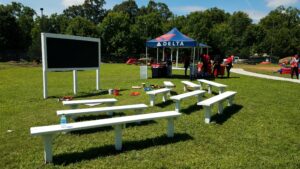 The students at Dobbs Elementary can take their curriculum outside of the classroom walls with this outdoor learning center. (Photo courtesy of The Trust for Public Land)

Dobbs Elementary now has a “transformed” playground, according to Dobbs Elementary Principal Tiffany Ragin, along with a reading gazebo, a pavilion, an outdoor classroom, with plans to plant fruits and veggies in their garden. Delta sponsored and helped build the site.

“It’s a great addition to the school. It gives teachers a different outlet other than being inside the class. Well, it gives us the airspace, you know with COVID and everybody being inside, outdoors is the way to go these days,” Ragin said. “Our motto is ‘learning without limits,’ and it just changes the way we look at education. So we are excited about now being able to educate beyond the walls of the classroom.”

She is also glad to be able to open the school’s newly-minted nature sanctuary to the neighborhood.

“It should be open for people in the community because a lot of children now don’t have outside spaces to go and play that are safe,” Ragin said. “So having the community park is a way for families to go and maybe relax on the weekend, and have a safe space out other than the street or spaces that they don’t necessarily have in their homes or apartment.”

Added tree coverage is another focus of the program, and the benefits of hanging around the leafy giants can’t be overstated. 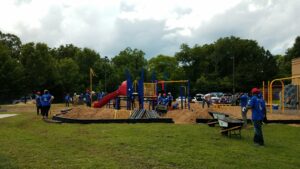 “TPL has been an awesome partner to work with, and we have adopted them as a partner for life,” Principal Tiffany Ragin said. (Photo courtesy of The Trust for Public Land)

A study published by Scientific Reports compared neighborhoods with high and low tree density and found “having 10 more trees in a city block, on average, improves health perception in ways comparable to an increase in annual personal income of $10,000 and moving to a neighborhood with $10,000 higher median income or being 7 years younger.”

The trees also negate some of the summer heat, a constant struggle in Atlanta, and reduce erosion by offsetting stormwater.

Atlanta Watershed Management is also joining the team to clean and manage the water on school grounds and teach kids about the water cycle. They even created a water systems curriculum that’s used in school.

The initial program will be completed by the end of 2022, with a vision of expanding outside city limits.

“This should be a best practice,” Dusenbury said. “That’s going to save Atlanta, not just in metro Atlanta, but across the state or nationwide.”

What do you think about opening the city’s schools to the public? If you’re curious about the impact of a park in different parts of the city, click here to create your own and see how it would improve access.