Atlanta Fed President Raphael Bostic talked about the long-term and older-worker unemployment situation the day before the Federal Reserve on Wednesday released another report citing a labor shortage in the Southeast and nationwide. 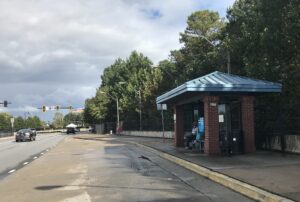 A sign of the peculiar jobs economy is evident in the lack of congestion during the 5 p.m. rush hour at a site that had bustled before the COVID-19 pandemic, the Cumberland Transfer Station, in Cobb County. (Photo by David Pendered)

The two observations seem contradictory. However, the two realities are apparent in everyday life in the form of yard waste left on curbs in Atlanta, because the city can’t hire enough workers, and in the number of older neighbors who just can’t seem to get a job and others who are routinely turned down.

Bostic said Tuesday the long-term unemployed and older folks would benefit from better information about the location of job openings and skills needed to get hired. The Atlanta Fed is trying to develop such information and post it on the website, he said.

“People who want to have work are not aware of where are new opportunities to get employed, and they don’t know what skills they have to have,” Bostic said. “That informational piece is really important.”

Bostic spoke in a virtual event sponsored by a website that covers the Capitol, thehill.com: “Back to Work: Helping the Long-Term Unemployed.” The event began with this observation on the homepage:

The definition of unemployed, according to the Bureau of Labor Statistics, requires each of the following: Not working during the week surveyed; available to work; made at least one effort to find a job in the past month.

Long-term unemployed refers to someone who meets the criteria above for 27 continuous weeks or more.

The notion that some folks can’t seem to get a job conflicts with the opening sentence in the report Wedneday by the Atlanta Fed. The report is part of the national Beige Book the Fed releases periodically that provides a snapshot of economic conditions as stated by contacts around the country.

The first sentence in the Atlanta Fed’s report on “Employment and Wages” observes:

Bostic said Tuesday he expects the shortage to ease as workers secure safe, reliable childcare and reach a comfort level with returning to the workplace.

“A quarter of the unexplained gap in worker returns are associated with women with children younger than 6,” Bostic said. “It’s not about income and maybe skills. It’s about how do you manage a family when support systems are uncertain and unmanageable.”

Job hunters are in the drivers’ seat as a result of the labor shortage. This section of the report concluded: