A scene from "The Velvet Underground"

One reason I’m somewhat neutral on the new documentary, “The Velvet Underground,” may be that I dated a guy in the early ‘70s who loved Lou Reed more than he loved me.

Or maybe it’s that I bought into the “hippie crap” – love, peace, flowers – the band was so adamantly against.

Still, I did admire certain aspects of Reed and his band. and I admire parts of Todd Haynes’ film even more. 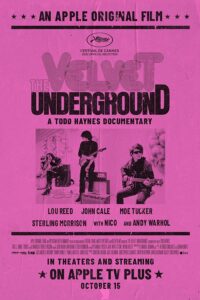 A movie poster of “The Velvet Underground”

Instead of a straightforward biopic, Haynes has given us a kind of collage – of the Velvet Underground, of the ‘60s and of Andy Warhol’s Factory where Reed and the guys were more or less the house band.

Using the split-screen, multi-media approach that was briefly popular during the period (check out Haskell Wexler’s “Medium Cool” or the original version of “The Thomas Crown Affair”), Haynes immerses us in the fabric of the times.

But first, he shows us why the ‘60s were necessary (or maybe inevitable) by showing us the ‘50s with its lung-cancer-friendly commercials (“Winston tastes good like a cigarette should!”) and quaint cartoon hucksters like the Campbell Soup Kids. Geez, just thinking of how soon – and how completely – Warhol would displace those Kids in Campbell’s iconography takes your breath away.

But back to the Velvet Underground and Reed and surviving band members like John Cale and Maureen Tucker who, along with relatives, fans, and random celebs are among the faces that turn up in Haynes’ meticulous accumulation of archival evidence and recent interviews. We are treated to everything from concerts to insider footage of what it was like to hang out at the Factory.

There’s the “blonde iceberg” Nico, added when Warhol decided the band needed more sex appeal. She couldn’t sing, but it didn’t really matter. It didn’t matter much when she left, either. “She was a wanderer and eventually she just wandered off,” someone says.

In an old interview, Reed recalls, pre-Velvet Underground, playing frat parties in college: “We were very bad, so we had to change our name a lot.”

That didn’t happen once they were within Warhol’s orbit, but they never really took off, either. Frank Zappa’s Mothers of Invention were, oddly enough, considered their major rivals. 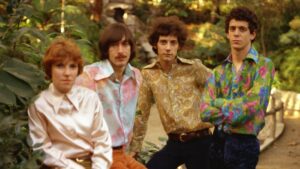 A scene from “The Velvet Underground”

What the Velvet Underground did do – better, perhaps, than any other band of the era – was presage movements like punk and grunge. Their F-It-All aura was as singular as their sound, especially at a time when Woodstock was what the “youthquake” was supposed to be all about. When they went to San Francisco, they didn’t wear flowers in their hair; they wore black leather.

Yet, it must be said that, as thorough as it is, “The Velvet Underground” is hardly a warts-and-all portrait. For example, there’s nothing about Reed’s misogyny, which, some say, could cross the line into physical abuse.

Still, Haynes has made a unique and ambitious picture, a scrapbook-chronicle of a time as mythic, in its way, as Camelot (Kennedy and King Arthur versions). To paraphrase Reed, why not walk on the wild side, even if it’s a somewhat sanitized wild side?

“The Velvet Underground” is in select theaters and available on Apple+ TV.