‘All things Russia’ hearing was all things Yates 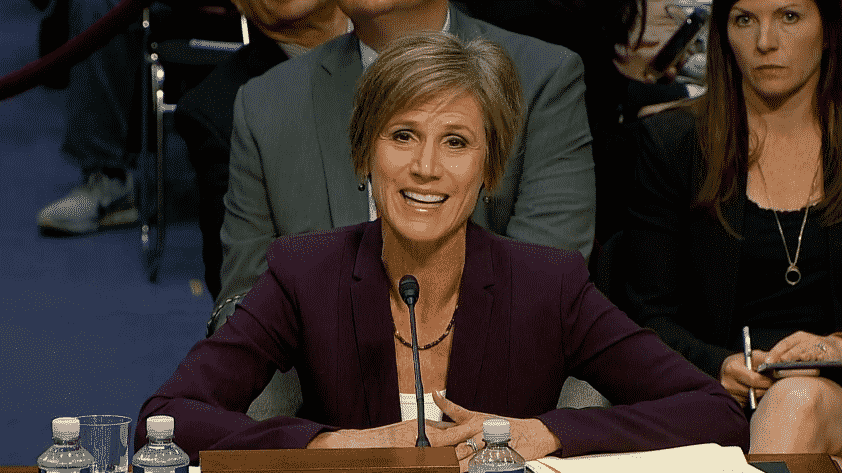 The subject of this hearing was to be “all things Russia,” U.S. Sen. Lindsey Graham said as he commenced the long-awaited Senate subcommittee hearing with former acting Attorney General Sally Yates and former director of national intelligence James Clapper.

The afternoon-long session turned out to be about a lot of things, most of them swirling around Yates. She played things by the book, declining to discuss what classified information she has about Russian attempts to meddle in the 2016 presidential election, but there was still plenty to talk about, from Hillary Clinton’s emails (again) to the suddenly sensitive subject of unmasking.

A European journalist, sensitive to the threat of Russian interference after the massive data dump just before Sunday’s election in France, would probably have viewed the hearing with despair at the American tendency to beat around the bush dealing with such an imminent danger.

But there’s a lot to unpack — to use one of the fashionable verbs of the day — in the 10 days between President Donald Trump’s inauguration and Yates’ firing for refusing to support the administration’s travel ban. No wonder this hearing went in many directions.

We knew already that most of the government was blindsided when Trump signed the executive order imposing the travel ban on Jan. 27, seven days after he became president. What emerged from Yates’ testimony Monday was the irony of it all.

The day before Trump signed the order, she met with White House Counsel Don McGahn in an attempt to warn the White House that national security advisor Michael Flynn had lied about his contacts with the Russians and was the potential subject of blackmail. She had another meeting with McGahn and a lengthy phone call on the Flynn matter, but never got tipped the executive order was coming down.

The hearing was billed as a blockbuster — with a hostile presidential tweet to mark its importance — but it almost immediately became a lawyer fest, and in this arena Yates more than held her own. She tossed questions Sen. John Cornyn had asked in her confirmation hearing about how independent she would be back in his lap when he questioned her refusal to follow Trump’s order, and one-upped Sen. Ted Cruz when he tried to recite federal code to her. She minced no words with Cornyn when he got ahead of himself in an attempt to trip her up about the order.
“Senator, I did not say it was lawful,” Yates told him. “I said it was unlawful.”

Yates made it clear that her attempts to warn the White House about Flynn amounted to considerably more than White House press secretary Sean Spicer’s characterization of it as a “head’s up.” Her testimony and the revelation that Barack Obama warned Trump about Flynn will insure that the former security director remains a major problem for Trump for the foreseeable future.

The Democrats on the subcommittee kept circling back to a question Yates said McGahn asked her in a follow-up meeting two days after the first one: Why does it matter to the Justice Department that one White House official (Flynn) has lied to another (Vice President Mike Pence)?

More than once, Yates defended McGahn, saying she took the question as procedural and not a casual attitude about the truth. But this is a bone too tempting for the Democrats not to gnaw on.

The same day McGahn asked Yates that question, Trump had his first presidential phone conversation with Russian President Vladimir Putin — with Flynn on the line. The next day brought the shakeup in which Stephen Bannon was named to the National Security Counsel. The day after that, Yates was out of a job.

It was only after the Washington Post published a story about Yates’ warning that Flynn was forced from his position two weeks later. Without that story, Flynn would have remained in this highly sensitive position and there would have been no hearing Monday. Yet many of the questions from the Republican side were about the leaks that made the story possible and the hearing necessary.

“Sally Yates made the fake media extremely unhappy today — she said nothing but old news!” Trump said in one of a spray of tweets that indicated he’d been watching. Others disagreed.