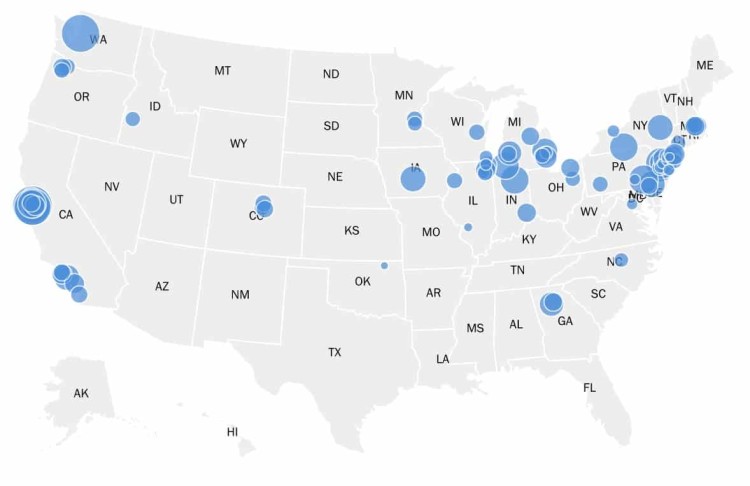 Two cities in Gwinnett County made TIME's new list of, 'The 100 Most Genius Places in America.' Credit: time.com

TIME magazine has included two cities in Gwinnett County on its list of, “The 100 Most Genius Places in America.” 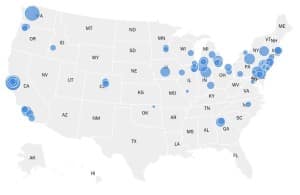 Two cities in Gwinnett County made TIME’s new list of, ‘The 100 Most Genius Places in America.’ Credit: time.com

These two cities, and Raleigh, N.C. are the only cities in the Deep South to make the list.

Arris is a global company that specializes in cable and telephony products that power TV and the Internet; the company acquired Motorola Mobility’s Home business in 2013. Femasys develops medical devices for the women’s healthcare market and is working on a permanent contraceptive product for women who don’t want temporary methods.

TIME based its rankings on population and the number of patents issued by the U.S. government. TIME created an interactive map to accompany the story.

TIME took the total number of patents issued in a city each year, and divided that figure by the city’s population.

The resulting figure represents the number of patents issued per 10,000 residents, according to the magazine.

Obviously, the smaller the population the greater the chance of making the list.

Princeton owes its position mainly to patents associated with Bristol-Myers Squibb Co. and RCA Corp. BMS’s ancestry includes household names such as Clairol and Excedrin, along with products that resulted from biologic research programs that won it the National Medal of Technology from President Bill Clinton. RCA produces an array of consumer electronic products.

Likewise, Morris Plaines, N.J. ranked No. 5, though it received “only” 2,747 patents. The town’s population in 2010 was 5,532. Most of the patents are associated with pharmaceutical giant Warner-Lambert Co., which was acquired by Pfizer in 2000. Warner-Lambert’s ancestry includes Listerine mouthwash, Dentyne gum, Certs breath mint, and Halls Mentholyptus cough drop.

Fourth-ranked Santa Clara, Ca. received far more patents than any other city in the country, according to TIME. One company is responsible for more than half of the patents – Intel. The world’s largest chip manufacturer has received 24,201 patents of the 58,341 awarded in the city of 116,468 residents.

On Wednesday, Intel released a video of 100 drones it flew in celebration of the FAA relaxing rules on flying commercial drones. It was the first such event on U.S. soil, although Intel performed a similar event in Germany earlier this year, following Intel’s acquisition of a German drone maker. Intel execs think the drone market has a large potential to grow.

Previous Article
Photo Picks: Light Saber by Trish Albert
Next Article
Mayors of Dallas and Fort Worth tell LINK delegation that Atlanta is a top rival