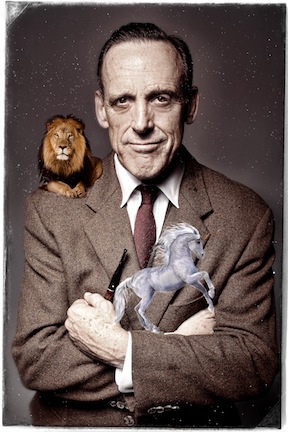 At age 63, C.S. Lewis had written his last book and was facing the end of his life, already one of the most influential writers of his era.

Now 63, just as he has for nearly four decades, Atlanta actor Tom Key will bring the renowned British academic, novelist and theologian to life once again next week.

Key will reprise his one-man show, “C.S. Lewis On Stage,” at the Theatrical Outfit starting June 19. The show will run until June 29.

Lewis renounced his Christian faith and then reclaimed it, and through his radio broadcasts, writing and speeches inspired others to take a hard look at what they believed and why.

Key was one of those skeptics, who pushed away attempts by friends that he read Lewis to better understand his unbelief. Key’s dramatic conversion led to him channeling Lewis in hundreds of performances around the world, becoming so comfortable in the dead writer’s persona that the upcoming shows are more like conversations. Even though Lewis left behind no films demonstrating his mannerisms, Key’s transformation is so complete that even Lewis’ family members and friends have praised his portrayal.

Growing up in Birmingham, Key was 12 when Lewis died— Nov. 22, 1963, the same day President Kennedy was assassinated. In high school, Key had a friend who nagged him to read Lewis, and gave him a copy of “Mere Christianity.”

“I could tell he was not going to let this go,” Key said. “He thought (reading Lewis) would make me a better person.”

Key said he found the book “so opaque and dense,” and ending up throwing it against a wall in frustration.

In college, Key—who is Catholic—experienced a spiritual awakening and married his wife, Beverly. She encouraged her husband to read the Narnia tales.

This time was different. The first few pages of “The Lion, the Witch and the Wardrobe,” pulled Key by the face into the story.

“I had this spirit, this compulsion to get my hands on everything this man had ever written,” he recalled.

Key acted on his experience with Lewis. In 1977, at age 26, he was the artistic director of the Birmingham Children’s Theatre and had been commissioned to do a reading of C.S. Lewis’ poems. But after seeing Julie Harris star in a one-woman show as Emily Dickinson in “The Belle of Amherst.” Key decided to create a similar one-person performance.

The task was difficult. Without footage, Key had to rely on photographs and voice recordings mimic Lewis’ movements. 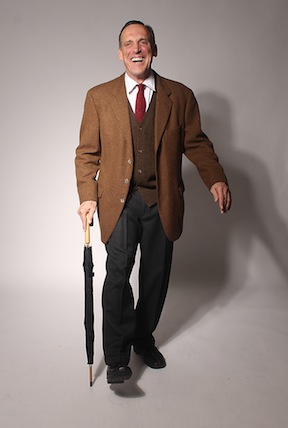 “I knew he was a robust character,” Key said. “He liked to walk and talk. He seemed to have great physical energy.”

“He would start lecturing in this big booming voice before he came in the lecture hall,” Key said. “Yet when he came over to the house of someone with small children, he was the first who be on the floor playing with them.”

Perhaps the most notable trait was Lewis’ “generosity of spirit,” Key said, recalling what Kenneth Tynan, the British theater critic and a student of Lewis once said.

“If I were ever to become a Christian it would be because of Lewis,” said Key, quoting the faith skeptical Tynan.

Within two years, Key had performed the show 120 times in more than 30 states. Critics praised him.

In 1998, at the invitation of Lewis’ stepson, Douglas Gresham, Key played Lewis at the Sheldonian Theatre in Oxford, England Later Christianity Today published an article about actors’ portrayals of Lewis.

“An American who has garnered surprising praise on both sides of the Atlantic for his Lewisian depiction is actor Tom Key of Atlanta, Georgia,” the magazine wrote.

“The presentation (by Tom Key) was excellent! A standing ovation,” wrote Clyde Kilby, the late author of “A Mind Awake: An Anthology of C.S. Lewis.”

I have yet to see the one-man show, but in 2011 did see Key’s production of “Freud’s Last Session.” The play depicts a fictional meeting in London between Lewis (played by Andrew Benator) and Sigmund Freud (David DeVries). The two engage in a thoughtful and personal debate about faith and the existence of God as Nazi warplanes are about to bomb the city.

The performance reminded me how Lewis often displayed a  wry yet earnest quality in turning anti-faith arguments on their head. The Gospels can be considered true, argued Lewis, precisely because they give wildly different accounts of the life and ministry of Jesus. The truth is imperfect.

Key’s portrayal of Lewis hasn’t changed as much over the year compared to his attitude about playing the part.

His research and the affirmation from audience members who knew Lewis have helped Key channel the author.

“It’s helped me to forget more and more about my performance and just trust the words and the craft of acting to make him present with the audience and enjoy being with the audience,” Key said. “That’s how it’s evolved, from performing C.S. Lewis to being C.S. Lewis with his old friends and people who are just getting to know him.”

Time has helped Key understand the struggles Lewis faced in later life. That includes how Lewis responded to the death of his wife, Joy, in 1960.

His performance speaks to the power of the greatest thinkers and authors to shake the way we view the world and ourselves. A great intellect who knows how to communicate can change someone’s core identity.

Though Lewis wrote seriously about life’s most pressing questions, he still had fun with language. In Narnia, for example, readers are introduced to Puddleglum, who says these memorable words through Lewis’ pen and Key’s performance: “Life isn’t all fricasseed frogs and eel pie.”