Men have lost access to traditional gathering places as COVID-19 has prompted businesses to close or implement distancing requirements, even at establishments such as this barbershop in Atlanta's Cascade Heights. Credit: Kelly Jordan

As men struggle to manage their emotions in this era of COVID-19 upheaval and social justice demonstrations, an organization whose first chairman was John Lewis is offering new programs to help. 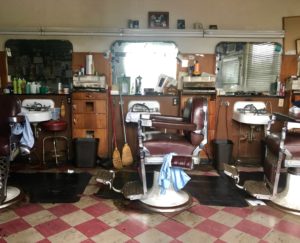 Men have lost access to traditional gathering places as COVID-19 has prompted businesses to close or implement distancing requirements, at establishments such as this barbershop in Atlanta’s Cascade Heights neighborhood. Credit: Kelly Jordan

Men Stopping Violence has established two programs in response to one reality of this era that has received scant attention: Men, as a group, have lost whatever sense of community they had to blow off steam and gain from their peers’ insights into a healthy life. They’ve lost pro sports as a shared interest, and many no longer see each other at work because they’re telecommuting or unemployed.

Men Stopping Violence has started two online, ongoing meetings where men can gather with other men. One is led by a featured participant who discusses a relevant theme; the Aug. 7 meeting was on the mandate to continue John Lewis’ work. The other intends to provide a healing space for Black men.

Especially for men of color, this is a time of high stress, according to Ulester Douglas, MSV’s associate director.

Jobs are scarce. Money is tight. The government that runs police departments, which some don’t trust, has told men to stay at home with whomever else may be there. News accounts of Blacks who have died in police custody provide an endless reminder of a sense of powerlessness. 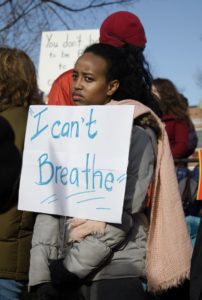 For instance, the words, “I can’t breathe,” didn’t start with George Floyd, who died May 25 while in police custody.

These words came into the culture in 2014, when Eric Garner uttered them before his death while in custody of New York City police. Garner’s death was ruled a consequence of a choke hold administered by a police officer, according to an account of a medical examiner’s report. The officer was fired – in 2019, five years after Garner died – but did not face criminal charges.

These stresses are amplified by the sense of isolation men feel as they have lost their support networks, even if they were as casual as quick conversations on the job, on a MARTA commute, at barbershops, beverage stores or food shops.

The men’s sense of isolation can erupt in acts of domestic violence in households shared with a woman, child or children, Douglas said:

Enid Draluck, a community volunteer, described the women’s side of the domestic violence scenario in a guest column that appeared June 28 in SaportaReport: