Training center protester killed by police is named; seven others charged with terrorism

The protester killed by police on Jan. 18 at Atlanta’s public safety training center site — allegedly after shooting a state trooper — has been identified and seven others charged with domestic terrorism.

The killed protester was 26-year-old Manuel Esteban Paez Teran of Atlanta and Florida, who called themself Tortuguita or Tort for short. According to fellow protesters, Tortuguita identified as nonbinary and is being incorrectly called male by police agencies, echoing the misgendering of one of six protesters controversially charged with domestic terrorism previously.

Seven more are now also charged with terrorism following the raid in which Tortuguita was killed and the trooper wounded. As in the previous round of such charges, the Georgia Bureau of Investigation (GBI) did not state the specific actions that constituted the alleged terrorism. The arrestees were identified as Spencer Bernard Liberto, 29, of Pennsylvania; Matthew Ernest Macar, 30, of Pennsylvania; Timothy Murphy, 25, of Maine; Geoffrey Parsons, 20, of Maryland; Christopher Reynolds, 31, of Ohio; Teresa Shen, 31, of New York; and Sarah Wasilewski, 35, of Pennsylvania.

GBI spokesperson Nelly Miles would not name the probable cause police had for the terrorism charges, citing a “very active investigation” and claiming not to have “any additional information.”

The GBI said another three people were allowed to leave the site, on Constitution Road in DeKalb County, after giving their names to authorities.

The Georgia Department of Public Safety previously said the government is withholding the identities of the wounded trooper and all officers involved in the shooting out of concern for “retaliation” based on social media comments. The department previously said the trooper underwent surgery and is recovering.

Among the threatening comments was a call, posted anonymously on the website “Scenes from the Atlanta Forest,” for Jan. 20 to be a “Night of Rage” to “make them pay.” Added the statement: “Consider this a call for reciprocal violence to be done to the police and their allies.”

However, hundreds of other comments spoke of nonviolent resistance to police violence and said that was Tortuguita’s philosophy, who was one of the dozens of protesters engaged in the civil disobedience of camping on the training center site to prevent the project.

A statement posted on the “Defend the Atlanta Forest” Twitter account read: “Police kill every day. There comes a time in your life when you have to say, ‘no more.’ For us, that time has come. We are fighting for a peaceful future. Cop City will never be built. We will defend the Atlanta forest.”

Tortuguita remembered as a martyr

Tortuguita is already becoming a martyr to protesters locally and nationwide. On the day of the shooting, a large group gathered for a vigil and march in Little Five Points. Vigils for them were held across the country this week, from Connecticut to California, Wisconsin to Texas. Local vigils announced by protesters include one Jan. 20, 6 p.m., at “Weelaunee People’s Park” – the movement’s term for a DeKalb park swapped to a private developer that is one protest target – and another Jan. 21, 5 p.m., at Underground Atlanta.

According to a press release from the “Stop Cop City ATL” movement, Tortuguita was involved in several collective, mutual-aid activities that are common among anarchist communities. In Tallahassee, Fla., they worked for Food Not Bombs — an effort to distribute food discarded by stores and restaurants to people in need — and aided in the rebuilding of low-cost housing after an unspecified hurricane. In Atlanta, they ran an Instagram account called “Brown Cat Mutual Aid” which helped in the Defend the Atlanta Forest movement to share resources and raise money.

“Tortuguita was a very kind person,” the press release quoted one of their friends as saying. “They were always willing to help and take care [of] people in need around them, especially the QTBIPOC [Queer, Trans, Black, Indigenous, People of Color] community. They were always attentive to others’ needs and offer always the best of them. A truly warriors [sic] for the forest and the people! I miss them so much.”

The press release quoted another protester as saying Tortuguita showed “strong commitment to critical thought and inquiry” and was known for “deep discussions about radical history, theory, and how we move together in this movement.”

“Tort was an instant friend to many, and touched countless lives with love and kindness in their tragically short life,” the protester said. “Their ideas live on in our actions, and their friendship lives on in our hearts. Rest in power, Tort.”

Atlanta journalist David Peisner, who has covered the protest movement, wrote in the digital magazine The Bitter Southerner that Tortuguita was one of his main sources. Peisner wrote that, while the facts of the shooting remain unknown, Tortuguita repeatedly expressed philosophies of nonviolence.

“The right kind of resistance is peaceful, because that’s where we win,” Peisner quoted Tortuguita as telling him: “We’re not going to beat them at violence. They’re very, very good at violence. We’re not. We win through nonviolence. That’s really the only way we can win. We don’t want more people to die. We don’t want Atlanta to turn into a war zone.”

He further quoted Tortuguita as saying, “Am I scared of the state? Pretty silly not to be. I’m a Brown person. I might be killed by the police for existing in certain spaces.”

Tortuguita’s “Brown Cat Mutual Aid” Instagram posts included a couple of memes fantasizing about the burning of police stations and Chick-fil-A restaurants and a cartoon of a woman brandishing a military rifle for “community defense” as part of a collection on the Trans Day of Remembrance. Other memes in that collection ranged from serious to humorous, including someone’s report of being beaten by homophobic family members and an anime character captioned, “You’re going to change the system from inside? Cringe.”

The Defend the Atlanta Forest protests have ranged from peaceful marches to civil-disobedience on-site camping in tree houses to destructive acts like vandalism, vehicle arson and throwing rocks and Molotov cocktails at or near police officers and civilians. There have been no public reports of anyone being injured by protesters prior to the Jan. 18 incident.

Many protesters voiced skepticism about the police version of Tortuguita’s killing, as no independent evidence is available. The GBI said it will not bring in an outside agency for an independent investigation, despite the agency’s role in the raids and its director’s public commentary about the shooting and the training center plan. 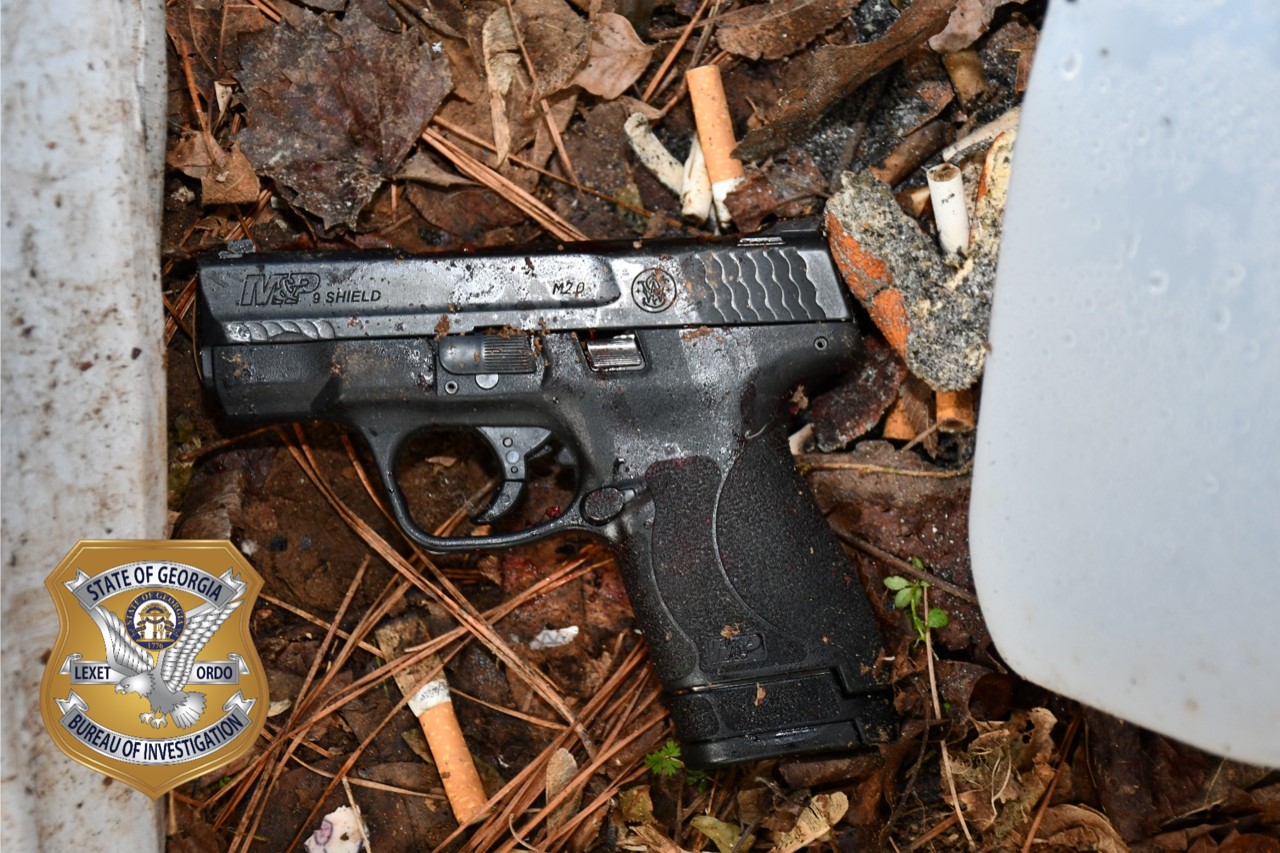 A photo issued Jan. 20 by the GBI allegedly showing a handgun used by Tortuguita to shoot a state trooper before police killed them.

The GBI on Jan. 20 issued a photo of what is said is the handgun — a 9mm Smith & Wesson M&P Shield — used by Tortuguita to shoot the trooper. “Forensic ballistic analysis has confirmed that the projectile recovered from the trooper’s wound matches Teran’s handgun,” according to a GBI press release.

The Georgia State Patrol (GSP) said that the troopers involved in the raid did not wear body cameras and that only troopers assigned to the State Capitol and Jekyll Island do so. The Atlanta Journal-Constitution reported that other police agencies involved in the raid are refusing to release their footage. Body cameras have been a widely adopted result of the police reform protest movement, of which the “Defend the Atlanta Forest” protests are a part. The training center itself is planned to include a body camera facility, according to internal emails obtained by SaportaReport.

The previous terrorism charges have been controversial for their vague basis and accusations from protesters that they are intended primarily to chill free-speech rights. Atlanta Police Department (APD) Assistant Chief Carven Tyus previously called on members of a training center advisory committee to promote a “narrative” that any protester from out of state is a terrorist and touted an apparently unconstitutional arrest of a man — who claimed to be a journalist — for filming police during a prior raid. Some civil liberties experts say that police agencies are veering into violent counter-protests of their own by way of illegal arrests of journalists and demonstrators. One case where a journalist on the training center site was detained and pressured by police to delete his footage is under APD internal investigation.

The GBI and GSP were involved, or alleged to be involved, in some of those illegal arrests and detentions. Another such case involved arrests of a journalist and protesters in a public park directed by a trooper who previously was shown on film arguing with a protester with such anger that APD officers physically intervened.

APD also has a long history of lawsuits for unconstitutional arrests of people filming or photographing police activity. Under a previous settlement, APD is supposed to train officers about citizens’ rights to record them, and in 2015, a judge ruled the department in contempt of court for failing to do some of that training, which, ironically, would occur in the new training center.

With that backdrop and precedents, some protesters and social justice organizations are criticizing the official story and lack of transparency.

“It is hard for us to believe that labeling individuals or a movement with ‘domestic terror’ is not inextricably linked to the extra-judicial murder of someone just yesterday,” said a press release from a coalition of social justice groups. “…We are currently navigating a climate where individuals face life-altering charges, where community groups are being intimidated through surveillance and legal inquiry, and where thousands of people’s demands to seek an end to Cop City are still unheeded by the powers that be, even as the Weelaunee forest floor is still warm with Tortuguita’s blood.”

The groups cited such previous cases as the 2015 killing of Anthony Hill by DeKalb County Police Department Officer Robert Olsen. Hill was naked and experiencing a bipolar disorder mental health crisis when Olsen shot him to death, claiming self-defense. The GBI investigated that case, and Olsen eventually was convicted and imprisoned for aggravated assault and other crimes.

The signers of that release included:

An anonymous press release published by the Atlanta Community Press Collective alleged that police agencies and media are collaborating to restrict information about the shooting. “We know they will say and do anything to prevent an Atlanta officer from being viewed as another Derek Chauvin, including withholding, distorting, or deleting evidence,” the release said.

“What is taking place is a classic example of tyrannical government overreach,” the release added. “The public has a right to defend its interests. We are advocates of a free and peaceful society built on cooperation and mutual understanding. The government is escalating this situation pointlessly… We will not go quietly into this dark night. RIP, with love and solidarity.”

Update: This story has been updated with the GBI’s release of information about the handgun allegedly used by Tortuguita to shoot the trooper.