An illustration of the "leadership institute" at the public safety training center, which could host community events and an Atlanta Prison Farm display, as shown at an Aug. 30 meeting of the Community Stakeholder Advisory Committee.

The idea of hosting community events at Atlanta’s future public safety training center drew some enthusiasm from its review committee — but also some resistance for memorializing the site’s history as a forced-labor prison.

“It’s almost like visiting a plantation and giving all the praises to a plantation,” said Shaun Billingslea, a member of the Community Stakeholder Advisory Committee (CSAC), at an Aug. 30 meeting that covered the concept of an artificial prison wall within the center. “It’s just me, as a Black man, it doesn’t sit right with me… honoring [or] acknowledging a prison,” he said.

The conceptual discussion came as the lead planning organization, the Atlanta Police Foundation (APF), continues to await a land disturbance permit (LDP) for the Key Road site from DeKalb County amid intense protests that, planners at the meeting said, have prevented them from conducting crucial noise impact studies, particularly for a firing range.

Another point of discussion was DeKalb District 6 County Commissioner Ted Terry’s attempt to get a deeper environmental review and a formal CSAC vote as requirements for the LDP. Several CSAC members took offense to that as a criticism of their work, but Terry told SaportaReport last week that he is backing off that attempt and may instead seek a nonbinding resolution asking APF to do it voluntarily. 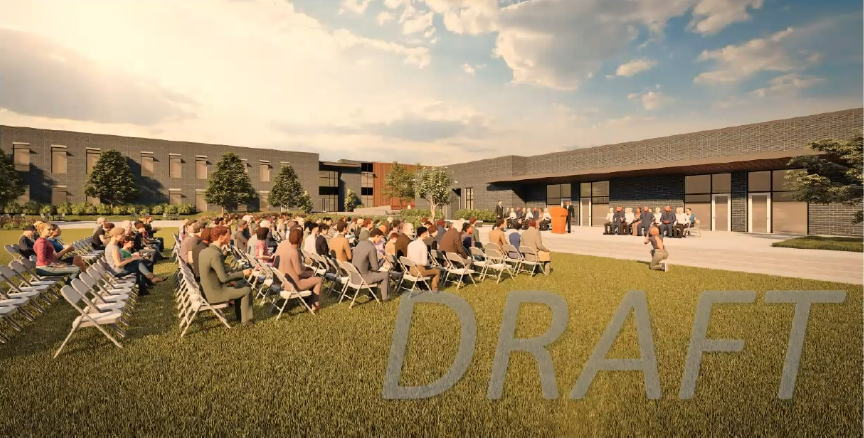 An illustration of the training center’s physical training field used for a community event, as shown at the Aug. 30 CSAC meeting.

However, he is continuing to press for the recreation of a “History, Reconciliation and Reparations Committee” to study ways to memorialize and redress sites of historical racial injustice around the county, including the training center’s former identity as the Atlanta Prison Farm.

“I’m glad that the Stakeholder Committee is also interested in some sort of history and look back, and how that develops,” said Terry. “That’s why I think we need to create an actual process, a citizen-led process, that gets us to an answer.”

The training center’s community events concept focuses on a “leadership building” or “leadership institute” and a physical training field. The idea is that they could host such events as graduations and homeowners association meetings.

“This whole leadership building, again, was 100 percent designed with the idea that this is that kind of space in which the community can sort of join the facility and sort of make it their own,” said APF Chief Operating Officer Marshall Freeman.

Tony Kenney, the project manager, described “museum-quality” spaces that could double as hosting sites for both community and police training. They include a lecture hall, a lobby area, and a memorabilia shop — or “swag store” — that could have an Atlanta Police Department (APD) history display.

CSAC members seem generally enthusiastic about the idea, aside from some concerns about parking. Freeman said more input would be needed in developing concepts, especially citing APF’s desire to “protect” the facility and keep it “nice.” He expressed some hesitation about public uses, such as how an HOA meeting would be distinguished from “just a group of folks getting together” and joking about not allowing “4-year-old Crayola art” if a community gallery were authorized.

While police stations sometimes have meeting rooms, it is unusual for police facilities to host such community activities. Police often have overriding concerns about security and privacy, and community members may feel intimidated by the police setting due to such factors as personal history, immigration status or political controversies like the one the training center is currently going through.

That was not discussed in the CSAC meeting, but APF spokesperson Rob Baskin later acknowledged that the planners have no existing model of a public safety facility that successfully hosts such events.

“We have always stated this would be a ‘first-of-its-kind’ facility,” he said. “National events have illustrated the need for a unique approach to building community trust. We have an opportunity to involve the community in a novel way.”

The training center is the target of protesters whose motives include social justice issues about policing and the criminal justice system both current and in the history of the Prison Farm, where a predominantly Black prison population was required to work in an era when chain gangs essentially replaced pre-Civil War slavery as unpaid labor. The training center’s own politics include trying to marry a tough-on-crime approach with a pitch that Atlanta has the state’s best-trained police force — including on racial issues and police brutality prevention. When the facility’s plan was publicly revealed last year, its name included the “Institute for Social Justice,” a term that has disappeared from APF and CSAC discussions without explanation. Baskin said this week that the name was “an early suggestion which was considered but not embraced by the previous mayoral administration.”

Welcoming the public onto the site with event spaces, nature trails and similar facilities is a major part of the attempt to improve police-community relations, but the Prison Farm memorial element of that concept had some CSAC members on the same page as the social justice protesters they have previously criticized.

Kenney said the concept includes a wall that would “hearken back to the construction of the Prison Farm,” made of 12-inch-thick, board-formed concrete “so it will have a lot of the look and feel that the Prison Farm did.”

That vision, combined with Freeman’s side mention of a way to “honor” the Prison Farm history, drew resistance from some members about spotlighting the prison. The planners quickly explained that these are preliminary concepts that need more work. Freeman said he’d be willing to have the CSAC vote on a final concept if there is a dispute.

“That one is a little bit of a challenge and I’ll preface this by saying I don’t have a good answer,” Freeman said of the concept. “Because I think there is a certain, again, segment of the community that feels really strongly about memorializing and honoring everything that has happened at the site. I think — and if I’m interpreting this correct — it is a manner in which you recognize some of the injustices that may have happened, I guess, over time, at this particular location, if I interpret it correctly. So again, I say all of that to say I think there’s a difference of opinion about it across the board.”

Kenney said the intent is to “forcefully talk about the history and what really happened, as well as talk about what the future of this facility will be.” He said the entire goal of the training center is “working to develop a future that is a little — that is considerably different than it has been in the past.”

Baskin said APF has not yet consulted any historical or social justice experts about the concept.  “When we’re further along in construction, we will assess [the] need for additional resources,” he said.

APF is already working with the nonprofit Atlanta Preservation Center (APC) on preserving some existing Prison Farm buildings and the remains of a historic library that were dumped on the property years ago, but the APC says it is not involved in the discussions about the interior display and the artificial prison wall.

The National Center for Civil and Human Rights, which provides human rights training to APD recruits, also said it is not involved in advising about any exhibitions.

Meanwhile, Terry, the County commissioner, says he is working with the DeKalb History Center on a preliminary budget for his history and reparations committee. He said that besides the Prison Farm, its focus might include the historically Black communities of Scottdale, Lynwood Park in Brookhaven, and Beacon Hill in Decatur, among others.

A recording of the Aug. 30 CSAC meeting can be viewed by clicking here and using the passcode cg=X@58#