Tree clearing for a road project on St. Simons Island, near the historic Christ Church, was halted Friday afternoon by a judge at the behest of environmentalists. 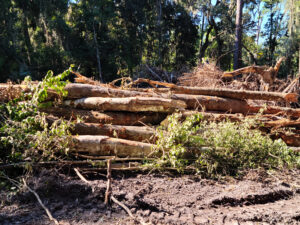 Trees cut down this week on St. Simons Island, to straighten a road near Christ Church, are stacked for removal. (Photo courtesy of Center for a Sustainable Coast)

The Center for a Sustainable Coast filed a lawsuit Wednesday to oppose destruction caused by a project to straighten a road that passes Christ Church, an Episcopal church built in 1885 on the site of a sanctuary built in 1820. Graves in the adjacent cemetery date to 1796, according to church records.

Church officials said in 2017 the project is needed to improve pedestrian safety between parking and the church campus. Glynn County joined the church in supporting a project to straighten a 1,700-foot stretch of Frederica Road, and to secure federal funding for the project.

Lane set a hearing on the restraining order for Oct. 25. 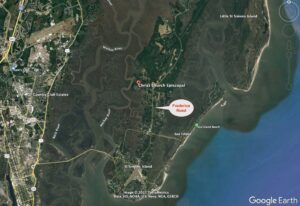 Frederica Road is a north-south, two-lane road that bisects St. Simons Island. The northern end of the scenic corridor is near two historic destinations – the church and Fort Frederica.

The project involves about 1,700 linear feet of Frederica Road, near the church. Church leaders called in 2017 for the road to be realigned in order to make land available for parking on the same side of the road as the church. Some vehicles now park across Frederica Road from the church, and occupants walk across the street to reach the church grounds. Church officials said the proposed road configuration would improve safety for those who visit the church and its cemetery, where unmarked graves date to 1796, according to a history provided on the church’s website.

Two lawsuits to halt the project are underway, both resulting from advocacy by the Center for a Sustainable Coast, based on St. Simons Island.

The first lawsuit was accepted Wednesday in Glynn County Superior Court. This is the one in which Lane issued a ruling Friday. The lawsuit seeks to halt demolition of trees and other work related to the road project. The reason put forth is the county’s alleged failure to abide by its tree ordinance. The request for the temporary restraining order contends: 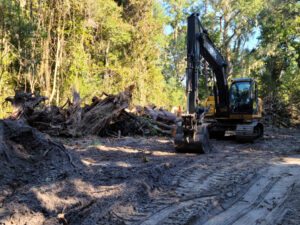 The second lawsuit was being assembled Friday, with plans to file it in the U.S. District Court’s Southern District of Georgia.

The potential federal lawsuit, also to be filed on behalf of the Center for a Sustainable Coast, challenges the legality of a Clean Water Act permit related to wetlands. The permit for the project was issued by the U.S. Army Corps of Engineers.

The corps in August had rescinded the permit necessary for the project to continue. The corps was responding to complaints that the decision to issue the permit failed to consider a ditch involved in the project. Historic artifacts have been discovered in the ditch and it has potential for nomination to, and protections of, the National Register of Historic Places.

However, the permit was restored Sept. 24, according to the center’s lawyer, Susan Shaw, of Decatur. The corps notified Shaw that the permit had been restored, following the expiration of a previous stop-work order.

“Upon learning that the corps’ permit had been restored, the center will be filing action in federal court immediately,” the center’s co-director, David Kyler, said Friday morning. “If successful, that litigation would disqualify the corps permit, requiring a new, stand-alone Section 404 permit review process to begin, including public review and, hopefully, enough delay in the project to provide time for additional investigation.”