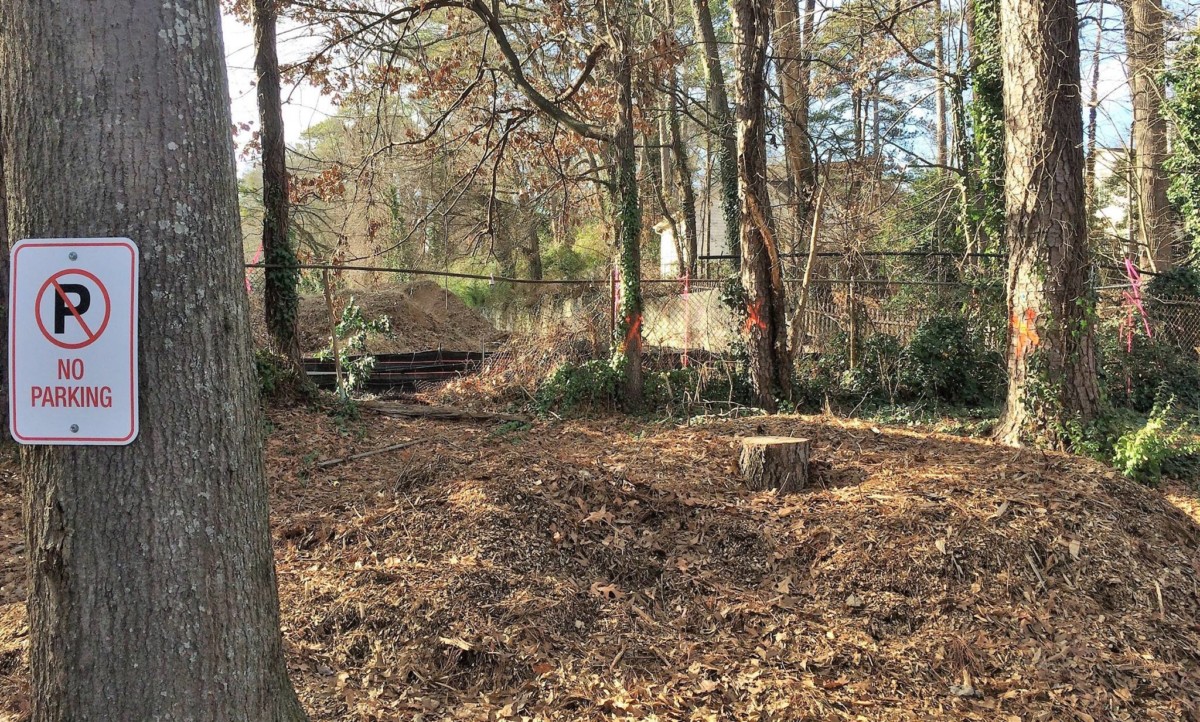 Hundreds and hundreds of trees will be cut down in the Peachtree Hills community as a result of two developments currently being proposed.

Ashton Woods – an ironic name for the developer – is planning to clear cut a 4-acre parcel next to Peachtree Hills Park ­– removing a total of 148 trees. 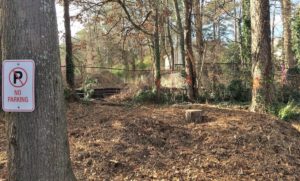 Across Peachtree Hills Avenue, Isakson Living will be developing a residential community on 20 acres of land that used to house the a modern-style Peachtree Hills Apartments, which were built in 1938 and were demolished in 2008.

The property has been vacant – with the exception of the grand trees that have shaded the area for decades.

Brian Thomas, vice president of construction of Isakson Living, wrote in an email that “the existing tree canopy has been and will continue to be a priority for our project….”

Isakson Living has been working the community to establish a 3-acre conservation area along the eastern edge of its property.

The Isakson Living property has a total of 735 trees, not including those that have been designated as dead, dying or hazardous. It will be saving 251 of those trees, but about two-thirds of the trees will be cut down.

When Isakson had first acquired the property, and tore down the old apartments, it initially planned to save about 50 percent of the tree canopy. But now there’s a new site plan, which will remove more than 480 trees.

Thomas said Isakson Living will be replanting 530 new trees, and there will be a total of 782 trees on the site But he acknowledged that the total caliper inches of trees (the size of the trunks) would only be 43 percent of the current quantity. 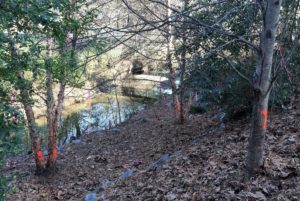 The trees that will be cut down as the pipe approaches the creek (Photo: Peachtree Hills)

Interestingly enough, the Peachtree Hills Apartments were able to be nestled within the trees that are currently there. It also had more residences than the number proposed by Isakson Living, which covers a larger footprint on the site.

In addition to the loss of trees, Ashton Woods also is seeking an easement to place a 48-inch storm sewer from its property through the Peachtree Hills Park and drain in the creek.

Laura Dobson, a neighborhood resident, believes it is a first for a developer to get an easement to go through parkland, and she is worried it will create a precedent to use the city’s parks for private development.

Dobson and other neighborhood residents believe there needs to be more due diligence on possible options to avoid using park land, including placing the pipe under Peachtree Hills Avenue. They also believe the drainage pipe could be a danger to children, and they are concerned about the environmental impact the discharge could have on the downstream creek bank.

Councilmember Howard Shook has proposed a couple of amendments to be part of the easement.The amendments included a bank restoration plan and some kind of screen to prevent children from climbing into the drain.

Shook also said Ashton Woods has agreed to make a $30,000 gift to Peachtree Hills Park if it can get an easement through the park. Michael Halicki, executive director of Park Pride, said his organization is the fiscal agent for Friends of Peachtree Hills, and it is serving as the conduit for the funds to be invested in the park. Halicki said Park Pride would not directly benefit from the Ashton Woods grant.

At its meeting on May 1, the Atlanta City Council approved the easement in a 12 to 2 vote, despite a plea from community members for more due diligence on the transaction. Council members Felicia Moore and Michael Julian Bond voted against the easement.

“Nobody is enthusiastic about going through park land,” Shook said.

But Dobson and other neighborhood residents were disappoint that there wasn’t more due diligence on possible options to avoid using park land, including placing the pipe under Peachtree Hills Avenue. 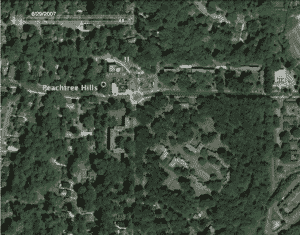 “This is important because a park easement like this … for private developer purposes only … has never been done in the City of Atlanta,” wrote resident Pat Reynolds in an email to residents. “If City Council approves this request, it will be used as precedent by every other developer who wants an easement through ANY city park.”

Kathleen Moriarty, zoning chair of the Peachtree Hills Civic Association, said Ashton Woods would need to cut down another nine trees to get the easement.

“Our support is contingent on the amendments being attached,” Moriarty said. The association found out that most residents did not support the pipe being built in the roadway and disrupting road access.

Mike Busher, a senior vice president with Ashton Woods, did not return a phone call or emails to comment on the project.

Moriarty does feel there’s a failure on many levels when it comes to trees. The Tree Conservation Commission “doesn’t ask people to change their plans” to save trees.

She also is concerned that the community cares more about the park land than does the city. So the community has tried to squeeze as much as it could from Ashton Woods. “If you are going to come through our park, it’s not going to be cheap, she said.

As for all the trees that are being proposed to be cut down, it appears there’s little that can be done if a developer is willing to pay the fines and/or plant new trees. 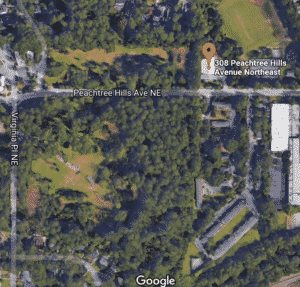 A look at how the easement would enter park land (Photo: Peachtree Hills)

“Nobody likes it when these trees are cut down,” Shook said, adding another bit of irony. “Some of these trees have to be cut down because of the BeltLine overlay plan.”

The BeltLine plan calls for wider sidewalks, which would mean cutting down the street trees, which Moriarty had helped plant years ago.

As for the plan by Ashton Woods’ to clear cut its site, Shook said: “I wish they had come up with a more context-sensitive plan.”

Across the street, Kevin Isakson, vice president of sales and marketing for Isakson Living, said the “tree canopy is of benefit to us.” And while it is working with Trees Atlanta, the community and the City of Atlanta, Isakson Living is still planning to cut down about 500 trees.

“Again, we feel that preserving and enhancing (through re-planting of both quantity and quality of species), in coordination with the neighborhood, Trees Atlanta, City of Atlanta, and Chattahoochee Nature Center, and our consultants, we have been, and continue to be good stewards of the Atlanta Tree Canopy,” Thomas wrote in an email.  “We recognize and agree that the Special Canopy that we have in this City is important for not only our development, but the community as well.”

Then let’s do better. Let’s save our treasured tree canopy.