In Trump-Cruz fracas, echoes of 1988, with more serious stakes 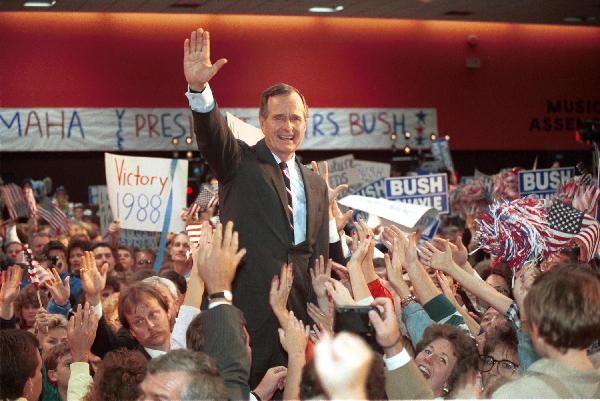 For Georgia Republicans, this is starting to look like 1988, with some dramatic twists.

In a process described by the Washington Post as “marred by shoving matches, bullhorns and allegations of death threats,” supporters of Pat Robertson, who had lost the Georgia Republican presidential primary, showed up in force at county conventions in 1988 and overwhelmed the establishment supporters of George H.W. Bush.

In one sense, you could say the shoe is on the other foot this year, so far as the role the establishment is playing. That’s the sense in which you could say that the Ted Cruz supporters who showed up to win a substantial number of the delegate spots pledged to Donald Trump represent the Republican Party establishment now.

At the state convention in Albany that year, the two factions split openly. Stuckey adjourned the convention, striking the gavel so hard it flew in the air, and the Bush supporters filed out of the convention center, waving a sarcastic goodbye to the Robertson supporters, who had commandeered the floor. It was, no kidding, a little like the last scene in “Zulu.”

Each faction brought a delegation to the Republican National Convention in New Orleans, where the Bush campaign, avoiding unnecessary conflicts with religious conservatives, engineered a compromise which allotted each faction half the delegate slots.

One of the lasting images of that year was Marguerite Williams, the Republican stalwart who had bankrolled the party through its lean years, giving unshirted hell to Pat Robertson on the convention floor when he visited the delegation.

That brings us to the most dramatic difference between then and now. In 1988, Bush had already secured the Republican nomination, and could confidently expect the Republican National Committee to rubber stamp whatever his campaign decided. It didn’t matter that the Robertson supporters would be bound to Bush only on the first vote, because there wasn’t going to be any second vote. So the Bush campaign could afford to appease the religious conservatives, even at the expense of infuriating some of Bush’s most loyal supporters in Georgia.

This year, the successful effort by the Ted Cruz campaign to out-hustle Donald Trump’s campaign at the county conventions has set up a conflict in which the stakes are much higher.

It gets very close and crowded on the floor of a national party convention, and if this one goes to a second vote, the space occupied by the rival Georgia Trump and Cruz supporters is going to feel very small indeed. The June 3-4 state convention in Augusta should be another doozy as well. That’s where 31 more delegates will be chosen to join the 42 who were elected — some disgruntled Trump supporters might challenge that word — over the weekend.

This week’s primaries will deliver a trove of delegates to Trump from the Northeastern states, insuring him a clear lead in the delegate count going into the national convention in July. But Cruz has proved to be by far the most dogged competitor in this reality show. It would have made a great episode on “The Apprentice:” one of the apprentices stages a coup on the boss.

Is the system rigged, as Trump says it is? It certainly isn’t transparent. It was designed to reward those who make themselves familiar with arcane rules and show up to execute them. And clearly, there will be big changes in the process after this election, even if they amount in the long run only to furniture moving.

In 1988, Bush came into the national convention trailing Democrat Michael Dukakis by double digits, and thrashed him in the general election. It will be much harder for either Trump or Cruz to pull off a similar feat, but it’s not inconceivable. By the same token, it’s highly likely the Republican nominee will carry Georgia, but a Democratic upset isn’t inconceivable either.

We don’t know yet how many voters will stay home this fall because the candidate they supported didn’t win the nomination. That goes for both parties, but it’s more crucial for the Republicans. And that will depend a lot on what happens when the two sides come nose-to-nose in Cleveland.

Previous Article
‘Everybody Wants Some!!’ is one hot mess of a movie
Next Article
Commentary: Coca-Cola promotes foundation leader from within