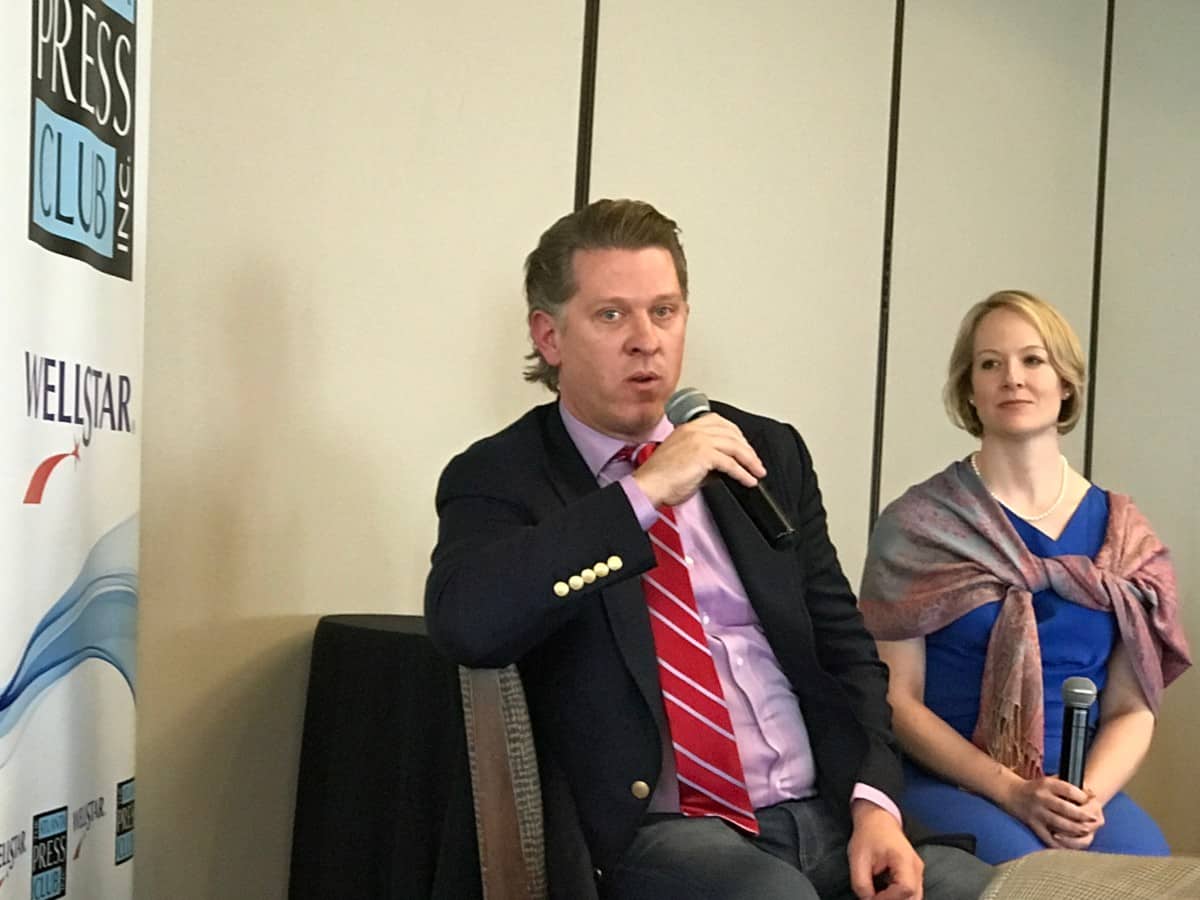 Atlanta will continue to play a pivotal role for Turner and its media properties  –including CNN, whether or not the merger of AT&T and Time Warner goes through.

That was one of the messages Turner CEO John Martin shared with the Atlanta Press Club Thursday during a Newsmaker luncheon. 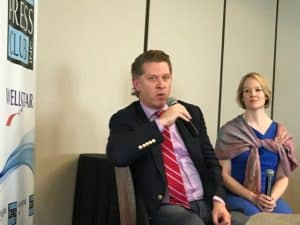 “Half of all of our employees are still in Atlanta,” said Martin, who declared he was a part-time Atlanta resident. “It is the birthplace and life blood of Turner, and it always will be.”

Later Martin sought to reassure the Atlanta audience about the future of the media company in the city.

“Our commitment to Atlanta is unwavering,” Martin said. “We are net-hiring in Atlanta now.”

Turner currently has about 6,000 employees in Atlanta working for the company’s 130 networks. Its sports operations, e-sports and Adult Swim network is based in Atlanta. At one time, almost all the top executives for Turner and its various networks were based in Atlanta.

Now most of the top executives of Turner’s entities, including Martin and CNN President Jeff Zucker, live in New York or in Los Angeles.

“The biggest area of opportunity for employment here is going to be in the area of technology,” Martin said. “AT&T has been very complimentary of what we are doing in Atlanta…. We want to be an employer of choice.”

That’s one reason the company has made a significant investment in its Techwood campus.

Asked specifically about CNN, Martin said: “The jobs that have moved elsewhere, principally moved to New York, those have been done. I don’t anticipate there’s going to be movement (out of Atlanta).” 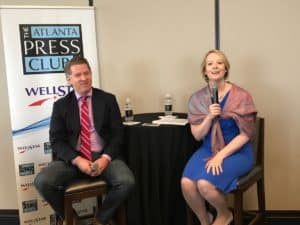 One of the questions the company is seeking to answer is how it can better employ its facilities at CNN Center.

Martin also said is “pretty optimistic” about the pending merger with AT&T, saying the two companies are focused on how to accelerate revenue growth.

“I’ve been part of some horrific mergers,” Martin said, mentioning the problem-filled union of AOL with Time Warner. “With a lot of these big mergers, culture is the big obstacle.” So far, Martin said the cultures of AT&T and Time Warner appear to be compatible.

Martin was especially proud of CNN’s operations, which employ nearly 3,500 people around the world – saying there’s a resuscitation of CNN’s importance.

“I don’t think the journalism mission of CNN has ever been as important as it is today,” said Martin, adding that the 24-hour news channel has resisted becoming too liberal or too conservative.

Last year’s presidential election and the election of President Donald Trump has presented its own challenges.

“There’s a fascination of the new administration because it’s just so different,” Martin said. “The mission of CNN is bigger than the business itself.”

Martin also disclosed that CNN makes about $1 billion in profit, and it is growing faster than it has in years. 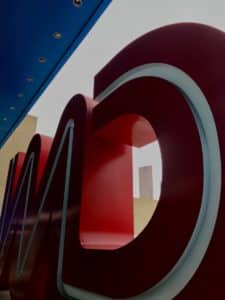 Despite that success, Martin said: “There has never been a more challenging time to be in the media business.”

The financial model for media is changing because consumers have more and more options for content. Martin said the debate of whether content is king or whether distribution is king has become more complicated. Now media companies have to also deliver a strong consumer experience through their various channels.

Martin also commended Zucker for his leadership at CNN – which Martin said  the “hardest job in the company.”

It has been particularly challenging covering the news during Trump’s administration because CNN has been targeted specifically by the president and his supporters.

“Just because a particular group of people don’t like the news we are reporting doesn’t make it fake,” Martin said. ”At the end of the day, we are all human beings.”

When you’re being attacked, your first inclination is to fight back. But Martin said CNN has held back – seeking to remain true to its mission as the most trusted source for news.

“The CNN brand has to be synonymous with trust,” Martin said. “If we ever break that, the business is going to suffer.”

In the interest of full disclosure, I serve on the board of the Atlanta Press Club. 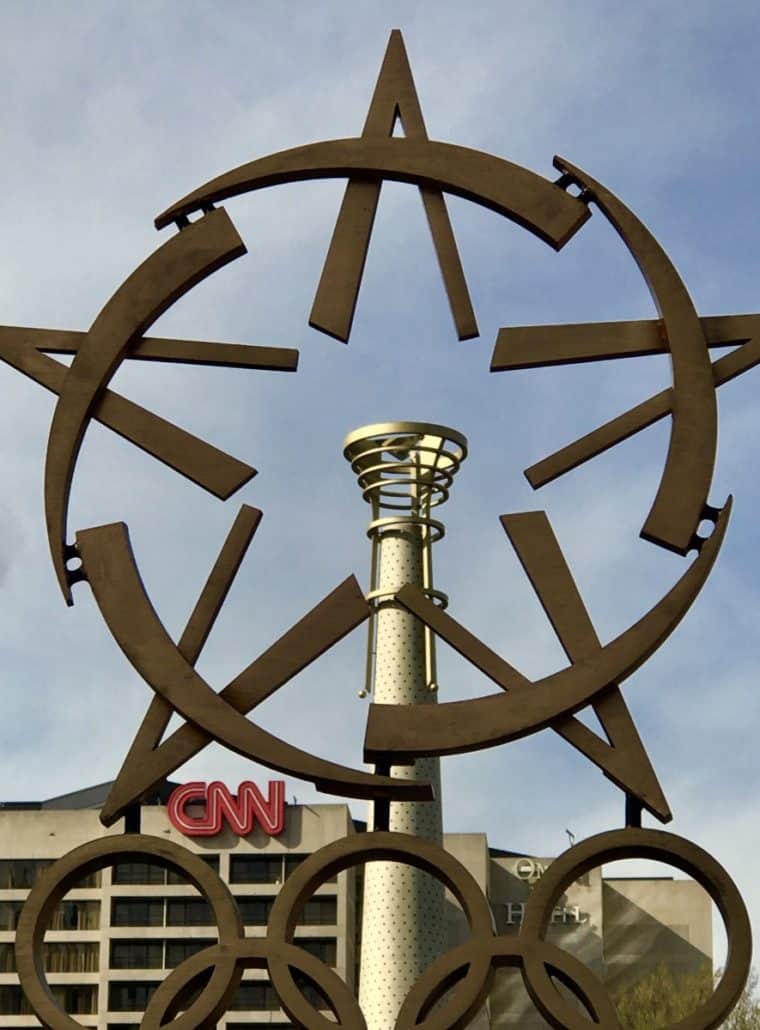