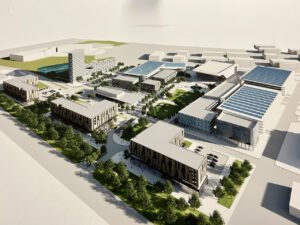 It was Perry’s first-ever public meeting with the community since buying 330 acres of the now-closed Fort McPherson property in 2015.

Perry bought the 330 acres, which he has developed as the home base for Tyler Perry Studios. A grand opening was in October 2019 for the studio’s 12 sound stages as well as a myriad of unique locations that feature the historic architecture of Fort Mac. Perry also has built a White House and other movie sets used as locations for films and television shows.

The new entertainment and residential district will be accessible to the public. Perry intends to offer public tours of the studio, which is under tight security and is fenced off from the community.

It was the first time Perry had met with the community engagement committee of the McPherson Implementing Local Redevelopment Authority (MILRA). Perry used the opportunity to share his vision for the additional 37 acres, which MILRA already has agreed to sell the property to him. Perry, who owns the “right of first refusal” to buy any additional land at Fort Mac.

Perry spent over an hour presenting his development plans and answering questions from MILRA board members, neighborhood representatives, community leaders and other interested citizens.

“So I’m here to answer any questions that you guys might have,” Perry said. “I’m here to talk about what the plans are, and I’m excited about this next phase.”

Perry presented a proposed rendering and map of his development plans. He is proposing to develop hotels, restaurants, grocery stores and a 3,500-seat theater.

The development would be adjacent to the 120 acres Bishop T.D. Jakes is buying from MILRA for a similar development. Perry told the community that he has spoken with Jakes, and they have agreed to work together to have their developments be conducive to the community’s needs. 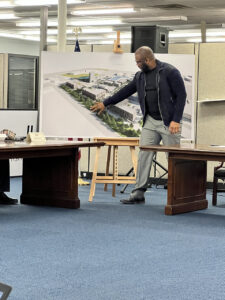 Perry described plans to demolish the wall next to Lee Street to build a linear park and create an aesthetic natural experience for residents and visitors.

Perry then explained that the plans could change depending on environmental issues to clean up contaminated land on the site.

“We don’t know if we’re going to work it out because there’s about half of the acreage that is affected by this environmental issue,”  Perry said.

The army base once had a dry cleaner on that section of land, and chemicals from the cleaners remain in about 200 wells buried underground. The Army and the Georgia Environmental Protection Division are working to develop a solution to clean up the site.

“Parking on the ground is an option,” Perry said, adding that he’s trying to see if the Army will allow for the wells to be moved. “The only reason for me to do this is to help the community and make sure that we have a place where visitors and people can come and gather and feel a part of us.”

Perry, who has only attended one official MILRA meeting back in 2014, made a commitment that he would come back to give a follow-up on his plans in a few months.