Slowly but surely the Atlanta BeltLine is securing the necessary funds to complete the Southside Trail — which will connect the Eastside Trail with the Westside Trail.

U.S. Sen. Jon Ossoff (D-Ga.) announced that he had secured an additional $5 million for the Southside Trail at a press conference at Pittsburgh Yards on University Avenue. That is in addition to a $16.4 million RAISE grant secured by Ossoff and fellow U.S. Sen. Raphael Warnock last November to accelerate the construction of the four-mile-long Southside Trail from Pittsburgh Yards to Boulevard Crossing Park. 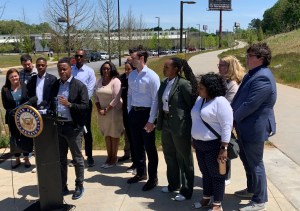 “The last 12 to 18 months have been the most spectacular in the Atlanta BeltLine’s history,” said Clyde Higgs, president and CEO of Atlanta BeltLine Inc., calling it a project that’s significant locally and nationally. “This is probably the largest redevelopment project of this type in the country.”

Higgs said the support from Ossoff and the federal government would ensure the project would be developed in an equitable manner. The 22-mile circular corridor will “restitch and reknit 45 distinct neighborhoods in Atlanta.” Higgs went on to say the initiative is on schedule to complete the loop and secure 5,600 affordable housing units by 2030. 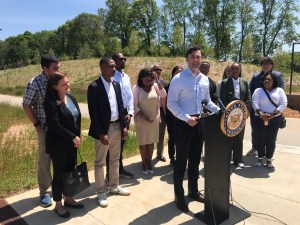 The $5 million was included in the annual appropriation legislation that received bipartisan support.

“I made the case on both sides of the aisle,” Ossoff said, adding the additional funds will “help accelerate the completion of this project.”

Higgs called the allocation a “game-changer” for the Atlanta BeltLine.

“This is going to allow us to repurpose some of those savings,” Higgs said. “We will be able to pivot for more equitable development and provide more money for small businesses around the BeltLine.” 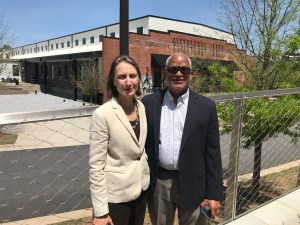 Natalie Keiser and Kweku Forstall of the Annie E. Casey Foundation stand in front of the Pittsburgh Yards development off University Avenue (Photo by Maria Saporta)

The foundation purchased the site in 2006, a time when the Atlanta BeltLine was just getting launched.

“Nobody understood the potential impact of the BeltLine,” Forstall said. Today, 16 of the 31 acres are developed. Forstall said there are five development pads that the foundation will provide a ground lease for “vertical” development.

Meanwhile, 70 percent of the space in the first phase of Pittsburgh Yards is filled with small businesses. An outdoor area next to the BeltLine will be a retail area located in repurposed shipping containers.