Mockingbirds are known for making music for humans to enjoy, according to a federal court ruling that cited the novel 'To Kill a Mockingbird' in its rejection of a ruling by the Trump administration that would have removed protections established in a 1918 federal law. Credit: By Ryanfmandelbaum - Own work, CC BY-SA 4.0

The pedigree of the federal judge who cited To Kill a Mockingbird when she rejected President Trump’s effort to reduce protections of migratory birds includes a UGA law degree, prosecution of mobsters in New York, and leadership at the FBI after 9/11. 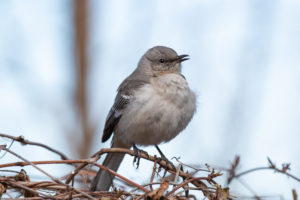 Mockingbirds are known for making music for humans to enjoy, according to a federal court ruling that cited the novel ‘To Kill a Mockingbird’ in its rejection of a ruling by the Trump administration that would have removed protections established in a 1918 federal law. Credit: By Ryanfmandelbaum – Own work, CC BY-SA 4.0

Many news accounts of the ruling by U.S. District Judge Valerie Caproni hailed the ruling’s opening words, which, for some, evoke warm memories of the performance by Gregory Peck in a movie based on a novel that won the Pulitzer Prize.

Ruling Aug. 11 in a lawsuit filed against the Trump administration, Caproni determined the Migratory Bird Treaty Act of 1918 does protect listed species from being killed without legal consequence. Caproni ruled against the administration’s effort to de-criminalize unintended bird deaths, such as when birds are electrocuted by power lines or drowned in uncovered toxic wastewater ponds. Caproni sent the measure back to the administration for review.

Stephanie Stuckey, a longtime environmental advocate now serving as CEO of Stuckey’s Corp., said she was graduated from UGA’s law school after Caproni and does not know her. Stuckey endorsed Caproni’s ruling.

“As an environmentalist and a fellow UGA Law Dawg, I applaud Judge Caproni’s ruling, and especially the Southern literary reference,” Stuckey said. “Even though she’s ruffled some feathers in the Trump administration, this ruling lifts my spirits and will keep our migratory birds flying.”

Less widely noted in media accounts of the ruling are Caproni’s roots in the South; her record as a prosecutor of one of New York’s five crime families; and her job as the FBI’s general counsel in the eight years following the Sept. 11 attacks – where Caproni defended the FBI’s use of telephone records of U.S. citizens, and the FBI’s interrogation techniques at Guantanamo Bay, Afghanistan and Iraq. 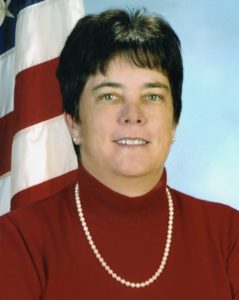 Caproni was born in 1955 in Lee County, Ala.. according to her bio on Federal Justice Center. The county is home to Auburn University and named for Robert E. Lee, commander of the Confederate Army.

Caproni clerked in Atlanta for a year after earning her degree, serving U.S. Appellate Judge Phyllis Kravitch, of the 11th circuit, according to the FJC bio. The court handles appeals from Alabama, Florida and Georgia.

Caproni moved to New York City in 1980, taking a job for five years as a litigation associate handling defense work for national and multi-national companies. The firm traces its roots to 1819 and founders who served in Abraham Lincoln’s administration – Cravath, Swaine & Moore. In 1985, Caproni became a criminal prosecutor with the U.S. District Attorney for the Eastern District of New York.

Seven of the 10 major cases Caproni cited as her major cases were as a federal prosecutor. She detailed them in her response to the Senate Judiciary Committee when it was vetting her for the job as federal judge. One case involved the stabbing death of Yankel Rosenbaum, an orthodox Jew, in Brooklyn. Another involved the government’s decision not to seek a reduced sentence for an administrator of the Luchese Organized Crime Family after he violated terms of his agreement.

The Columbo Family War was the subject of five cases Caproni cited. All were prosecutions that involved a shooting war for control of one of New York Five Families. The last case, resulting in the conviction of Gregory Scarpa, Jr. is the stuff of TV dramas: An organized operation that sold marijuana at the College of Staten Island, and cocaine and heroin in Brooklyn; attempted to bribe police to protect their Staten Island operation; and extorted fees from other drug dealers in Brooklyn.

Caproni served as general counsel for the FBI from 2003 through 2011. In this role she had a role in the government’s prosecution of the War on Terror, which followed the Sept. 11 attacks by Sunni Islamic fundamentalists.

Caproni delivered remarks in 2008 to the Senate Judiciary Committee in which she highlighted findings by the Office of Inspector General that FBI agents had employed interrogation techniques that are legal in the U.S. during interrogations in military zones including Guantanamo Bay, Afghanistan and Iraq:

Caproni defended the FBI’s use of telephone records to track and pursue terrorists. Caproni called the actions a “failure of internal controls at the FBI” and “a wake up call” in remarks before the House Judiciary Committee in 2010, according to a letter that’s part of a federal lawsuit that sought information about a number of surveillance issues. Caproni also addressed the issue in a 2011 statement to the House Judiciary Committee, according to an FBI record.

When the issue arose during Caproni’s confirmation hearing for the federal judgeship, Caproni responded that she understood her previous responses had addressed the issues, according to records of the Senate Judiciary Committee.

The Senate confirmed President Obama’s nomination of Cabroni on Sept. 9, 2013, nine months after her Jan. 4, 2013 nomination. Cabroni received her commission Dec. 2, 2013 and serves on the Southern District of New York, which serves Manhattan and the Bronx, and six downstate counties.

The judge found herself the center of attention on Aug. 11, when she cited To Kill a Mockingbird and halted the Trump administration’s efforts to remove protection for certain birds. Caproni wrote:

Caproni added this footnote, which ends with the federal law that protects certain bird species:

Previous Article
JLA Grants Provides Relief Through PPE and Other Needs to Local Healthcare Systems
Next Article
Georgia voting process looks a little like some states out west — but it might not for long.