The Rotary Club of Atlanta hosted a fireside chat with UNCF President, Dr. Michael Lomax, on the influx of HBCU support in the last two years. Credit: Allison Joyner

Under his leadership, the nonprofit has raised over $3 billion for hundreds of thousands of students at 37 Historically Black Colleges and Universities.

Michael Lomax, president of the United Negro College Fund (UNCF), has a lot to say about why Atlantans should support their HBCUs, especially the Atlanta University Center.

“The colleges themselves are telling us that while they received extraordinary support in ‘20 and ‘21, the real year they’re worried about is what happens in ‘22 if they don’t see the support sustain,” Lomax said at a recent Rotary Club meeting. 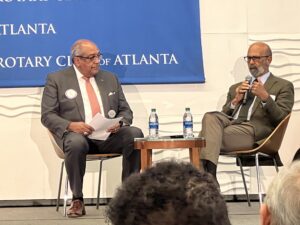 Lomax told those in attendance that of the seven HBCUs in Georgia that the UNCF support — Clark Atlanta University, the Interdenominational Theological Center (ITC), Morehouse College, Paine College, and Spelman College — represent 12 percent of all four-year institutions, however, 18 percent of Black students are enrolled there.

In addition, to an impact to the Black student population, Lomax said in his fireside chat with UNCF’s board of directors chair, Milton Jones, on the tremendous economic impact these schools provide for Georgia and the region as well.

“These institutions have an annual economic impact of $1.3 billion with 12,000 jobs and their lifetime earnings of the almost 3,500  graduates in that year would be $9.1 billion,” Lomax said.

In a conversation with Jones, Lomax said that within the two pandemics we are in —the renewed anti-Black violence frequently by the hands of law enforcement as well as COVID-19 —  HBCUs have received overwhelming support from corporate and private donors like Amazon co-founder Makenzie Scott and philanthropist Michael Bloomberg.

He commented that the presidents from ITC, Clark Atlanta, Morehouse, Morehouse School of Medicine and Spelman who were present during the event “will affirm that the balance sheets of their institutions are stronger 18 months after the beginning of covid of these twin pandemics than they were in April 2020.” 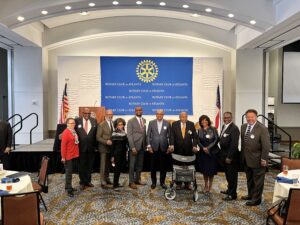 The Biden administration has been a continuing sponsor of these institutions since the beginning of their term. The Build Back Better and the HBCU IGNITE bills will enhance the federal support for HBCUs if adopted by Congress.

Before negotiations eliminated the free two-year community college tuition addendum, Lomax told SaportaReport HBCUs were going to be a benefactor of that program.

“most people don’t understand is that public and private HBCUs are included in that and we get two years of subsidized tuition,” he said.

Another upward trend for HBCUs is the demand for enrollment for new and transfer students. Earlier this year, Morehouse College Vice President for Marketing, Communications and Admissions, José Mallabo, told SaportReport at least 16,000 prospective students have inquired about the all-men school. Still, they only have dormitory space for at least 3,000 of them.

The HBCU IGNITE bill will increase funding to HBCUs by $1 billion and provide desperately needed repairs and renovations for campus buildings and research facilities across the country.

“What the UNCF does is that we activate interested citizens to contact their senators and their members of Congress,” Lomax told the Rotarians. 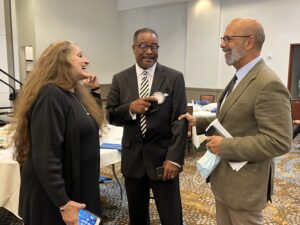 Lomax said Georgia Senator and Morehouse graduate Raphael Warnock is an influential supporter of the bill and is expected to vote in favor of it once it passes in the House.

“If you go to hashtag HBCU ignite, you too can let folks know what you think. It’s important to invest in HBCUs.”

Lomax concluded, “the entire Atlanta University Center is an economic juggernaut in the world of HBCUs. As they begin to work more closely together, I think you’re going to see even more investment and support for those institutions.”